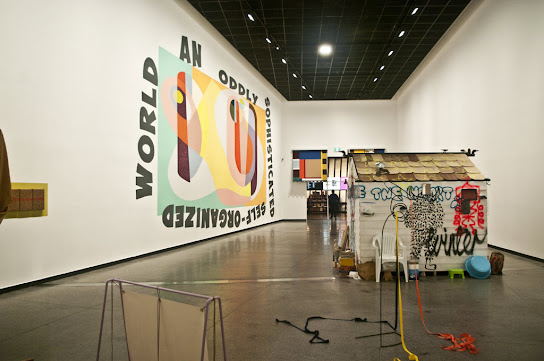 ‘Like a Wheel That Turns’ is a group show of eight, mostly young, emerging artists curated by Max Delany and Annika Kristensen at ACCA. It forms the third and final part of a six year programme commissioned by distinguished arts patron The Macfarlane Fund. The Fund was established in memory of Donald Macfarlane, one of Melbourne’s prominent arts patrons and pursues a number of arts programmes. Under the biennial commissions, each artist is awarded a handsome fee and budget for a new body of work for exhibition at ACCA. The selection aims to reflect recent developments in the arts and is echoed in the Fund’s emphasis upon ‘a rigorous approach to decision making and a commitment to being flexible, effective and responsive to artistic practice and initiatives’. This brings special scrutiny to the curator’s selection process, something the catalogue, when it eventually appears (it was unavailable four weeks into the show) will no doubt furnish. In the meantime the ACCA website offers a quick summary of concerns and these are the focus of the review. 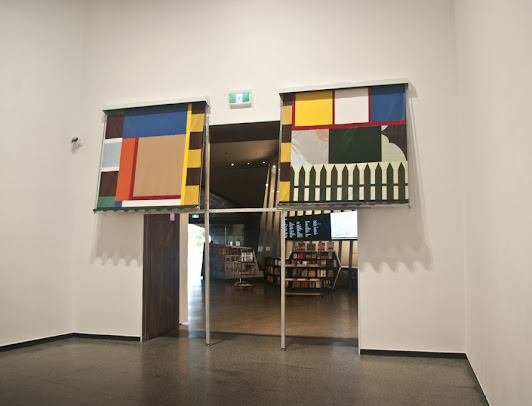 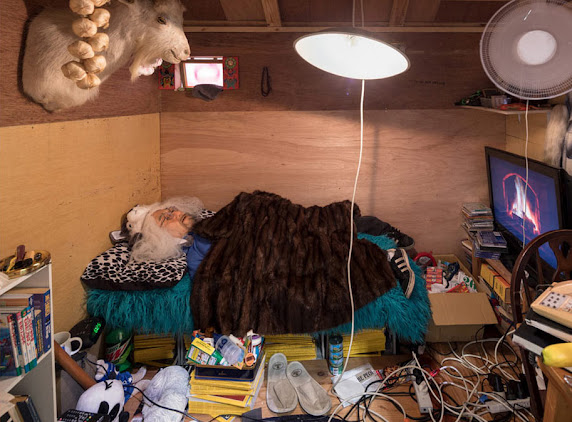 Jason Phu ‘Everyone Is Dead Except For Me. Everything is Futile and I Am Tired. I Wait In My Little House For The Winter To Take Me’ (2022)

All of these more or less gel as essentially sculptural or architectural projects, although how prevalent or relevant they are to the current scene is another matter. Certainly ACCA's reputation rests largely with presenting such projects. The remaining two artists on the other hand, figure as essentially marginal. Muffler, an elderly Aboriginal artist from Central Australia, preserving tribal lore in a familiar, painstaking map, and Manik, an equally unexceptional post-modernist virtuoso, replete with historical pastiche and impeccable technique in nods to traditional genres. Both seem an awkward, frankly unnecessary inclusion. Neither addresses mainstream contemporary concerns. For Muffler, her concerns are intensely local (quite rightly) and there are ample avenues for her elsewhere. Had the curators had their heart set upon a representative from Iwantja Arts for some reason, they might have found a bolder, more provocative exponent in Vincent Namajira, but that may have upset other commitments. 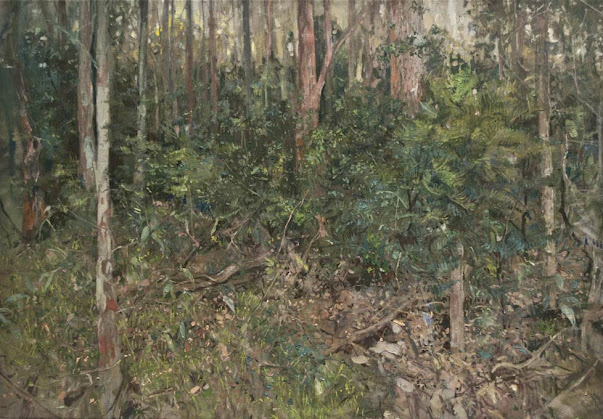 Manik, one senses is hostage to conspicuous virtuosity. An argument can be made for painting seen as returning to an enlarged field of genres following the dissipation of Modernism, perhaps thirty years ago, looking to applications of photography in particular and paraphrasing these through painting. However options there are perhaps not strict or reverent enough for a certain homo-erotic undertone to some of the artist’s work. They would not carry quite the subversive mischief. Given the focus to the rest of the selection, someone like Tully Moore, with his interest in graffiti and commercial signage, might have been a better fit. In addition to these qualms, there is the delicate matter that half of the artists are represented by the same commercial gallery and the suspicion that a public gallery may be endorsing or promoting commercial advantage is surely just what the Fund’s stipulations on rigour are supposed to address. For this reason also, the curator’s rationale acquires added weight.

The gallery website provides three paragraphs outlining the approach taken to selection and even allowing for some compression, the emphasis upon painting seems both perverse and sadly misguided. This commences with the title ‘Like a Wheel That Turns’ (what other kind are there?) which is drawn from a discussion by painter Marlene Dumas on the difference between figurative painting and photography, whereby a snapshot is confined to a brief instant while painting proceeds through a slower, circuitous accumulation of detail. A similar distinction is advanced by David Hockney. Here however the curators treat the circular or circulating process as a metaphor for a much grander – not to say abstruse – circulation of ‘social, physical and digital’ networks of meaning, ‘discursive legacies’ which are to be set against ‘the limitations of the art historical canon’. All of which awaits considerable unpacking. None of it properly suggests a criterion for selection, since such networks by their nature, operate across the whole range of the arts so that nothing there particularly recommends the work of the eight artists selected. Similarly, reference to broader realms of social activity and other art forms within a given work are true of most if not all art and so are trivial as a defining trait of the selection criteria.

The claim that the chosen site-specific works ‘implicate the viewer within the temporal frame of painterly materiality’ (as conceived by Dumas) and ‘invite us to consider how painting might extend beyond the specificities of its medium and the confines of the frame’ makes no sense because it ignores adjacent disciplines of sculpture and graphics or prints. Why should sculpture, installation or text be taken as an extension of painting – and figurative painting at that – merely by the presence of pigment? Painted sculpture is as old as sculpture itself. Three-dimensional work has its own project, its own trajectory, as does text. The curators attempt to clumsily embrace painting with the examples of Muffler and Manik, but fail to acknowledge the particular figurative context Dumas addresses, irrelevant to Muffler, mere stylistic trope for Manik. Yet if the curator’s framework is too broad to properly direct their selection, what further conditions might be supplied?

Looking across the show as a whole, there is firstly topical themes, such as NBN promise of high-speed optical connections and an intranet of cute or curt messages alluded to in the work by Reforma. Then there is the pandemic in Phu and the precautionary burning off of bushland in Manik. Interestingly these arise in the three male artists to the selection. In counterpoint to pressing issues, works are also flippant or frivolous; in the jaunty caption to Lane’s wall design, Hernandez’ whimsical lettering, Stewart’s ‘Painted Ladies’ standing for their geometric awnings and the achingly thin fabrics or diluted colours to Pasco-White’s ‘Embodied Watery Entanglements’ exemplifying the wet and clingy. The overall impression is unmistakeably of detachment,  light or shallow undertakings, a game of indulgence and privilege, which may accurately reflect the current art world, at least for a favoured demographic, but seems a poor return on the generous patronage of The Macfarlane Fund and a disappointing neglect of many other vital projects to the contemporary art world. 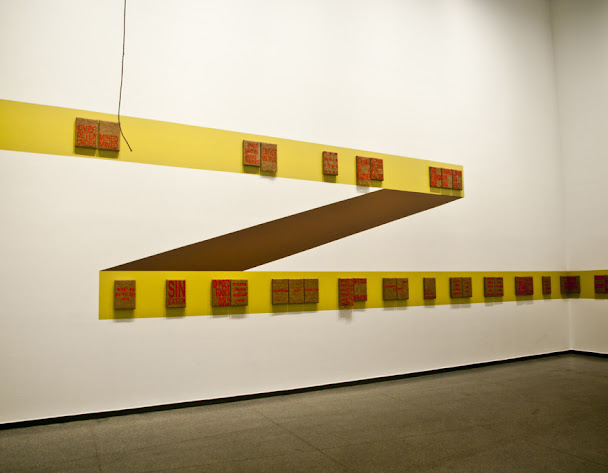 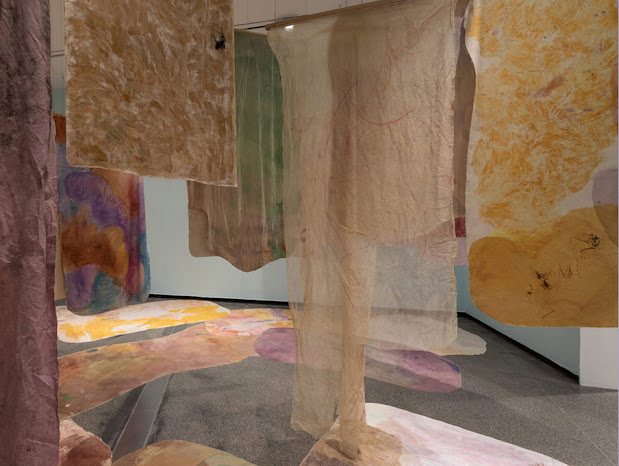 The elephant in the room here is unquestionably the absence of video and photography. Digital advances in this area have made it an especially lively area of experiment, indeed, influencing painting practices and figuration at least as much as site-specific opportunities. Someone like Alison Kennedy, (a recent VCA grad - practically a requirement for a commission) with her novel use of architectural modelling and animation software, manages to do both – look back to the figurative tradition of painting and to the temporal realm of digital animation. Inexplicably this whole area finds no response or commission from the curators and does nothing to dispel the impression of selection resting far too heavily with commercial gallery preferences. The selection looks backward in every sense, not just through lack of articulation or eloquence but because too many tacit commitments drive private agendas.

ACCA was contacted for consultation but declined to reply.