The Blob consists of a thirteen-minute (approx.) video and suite of eight silkscreen prints squeezed onto an adjacent wall at the modest Kings Artist Run space. The collective, perched improbably in the heart of Melbourne’s business district is now in its fifteenth year as a respected independent venue and Kennedy’s show is a good example of its enterprise. 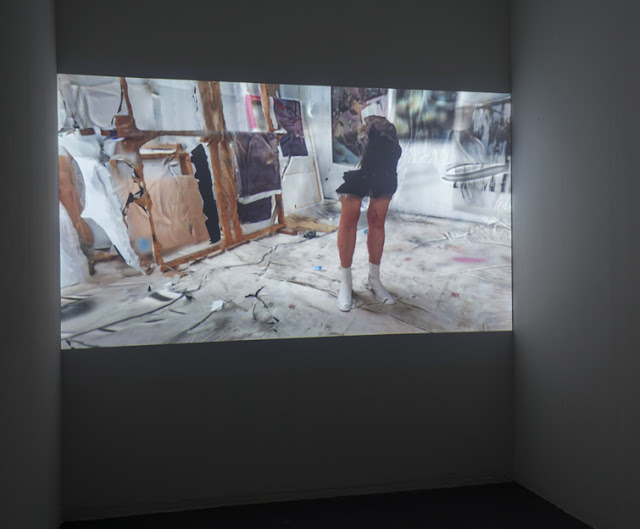 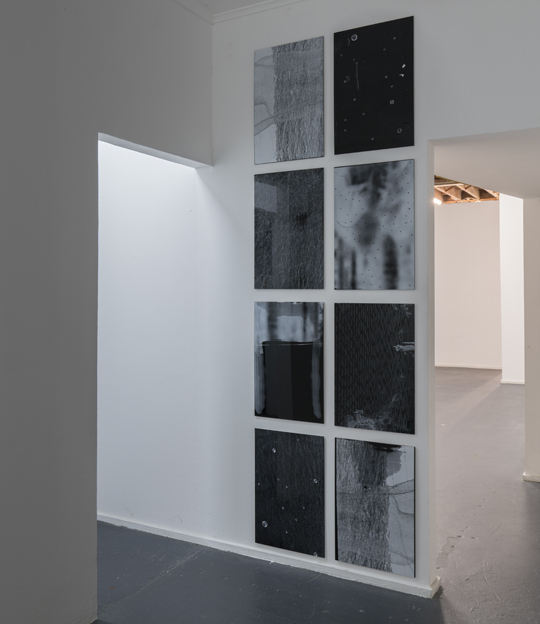 The show continues the artist’s interest in digital imagery, its variety and combination, the glitches and inconsistencies that arise through computation, their unexpected meanings for representation. A key development since 2018 has been her use of 3-D modelling and animation, in particular Autodesk’s ReCap Pro, in which photographs may be combined into a three-dimensional space or volume, derived from overlapping cues within the source photography. It is a process not unlike the more familiar merging of photographs sharing contiguous content to create panoramas, found in applications such as Adobe Photoshop. The technical term for the 3-D process is photogrammetry. ReCap is generally used to convert aerial or satellite imagery for architectural purposes. The constructed volume may then be traversed by a software camera and its motion recorded as an animation, much as in other 3-D modelling programmes.

However, for Kennedy’s purposes, it is the spatial calculations or estimations the programme makes for objects based upon photographs and their distortion or compromise with the original content that is paramount. These deficiencies are amplified by applying the software to more challenging or less appropriate content. For this, the artist here uses a full length figure (herself) in the centre of her small painting studio, painstakingly documented with thousands of photographs and then recorded in a spiralling camera movement that begins from her boots, highlighting the proximal volumes attributed to such complex surfaces, only for the compilation to crash as it reaches her torso 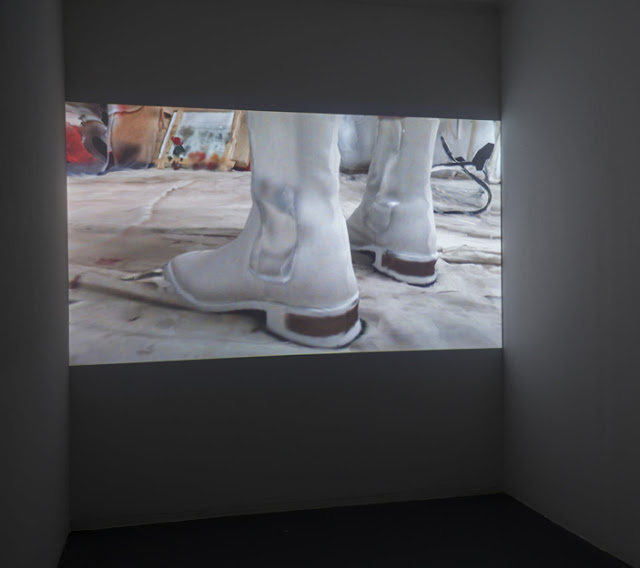 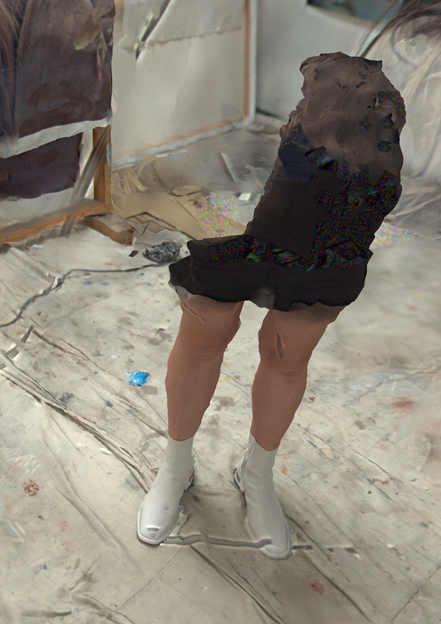 
The camera continues to circle the half-finished figure, but for some reason the programme has been unable to complete an assembly of the photographs. This puzzling accident remains a matter of almost fatalistic resignation to the artist and leaves the intended self-portrait as not much more than a blob – perhaps prompting the show’s title. The work is available online in two shorter versions, a 2.28 minutes one and a 10 minute one.
A similar work, also online is worth viewing as well. Selfie:Flag 4.42 demonstrates an interesting overlap in concerns. It too deals in a self-portrait in her painting studio and here - courtesy of You Tube - one can study more closely the strange ragged edges that result from the programme tentatively anticipating additional ‘bites’ of information to edges of planes, of the expected size and shape of contributing photographs and of the incoherence of mismatching content. Here there is no crash to the compilation, merely an inability to resolve the range of supplied photographs into an accurate 3-D model of the content. 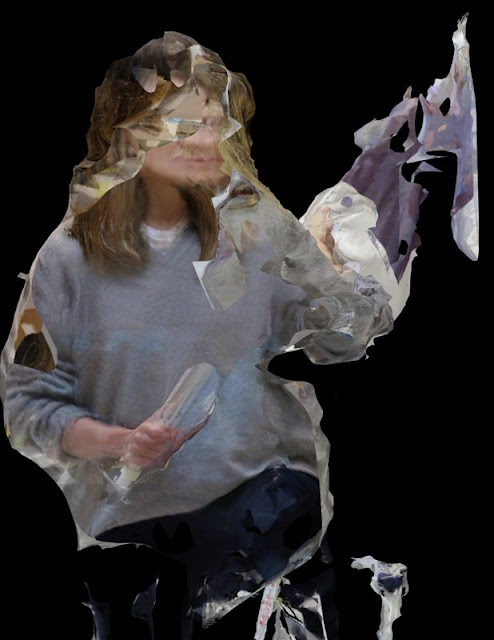 The work acquires something of a painterly flow and simplification and one begins to see the point in locating the figure within a painter’s studio – to prompt comparisons between the kind of stylistic flourishes available to the painter’s repertoire of techniques and those derived from software process. Yet the contrast is also between a private scheme at the command of a painter and a computational process at large or within the public domain. Crucially, the animation dwells upon the incompleteness to the surroundings above and below the figure and to the figure’s volume, established only for roughly the front and distortions wrought in particular to the face in sustaining a plane. Vacant areas to the modelling register as a flat black space so that the figure, when viewed where the surrounding studio has not been supplied; is rendered in a stark isolation. Indeed, toward the end of the animation the camera tracks into the face from the back of the figure – so the face is now viewed in reverse - and blurred in a Bacon-like transience. These aspects surely suggest a psychological dimension to the self-portrait, to the issue of personal identity more generally. Just as importantly, the equation between painting and digital imaging suggests an intriguing division in meaning and realm. One fails where the other succeeds, one makes sense while the other breaks it. One is private when the other is public or social. Painting, in other words, is anchored in quite subtle and unexpected ways with the digital world.

All this is both surprising and accomplished for an artist currently completing an MFA at the VCA. And it is not simply a matter of a younger generation with a surer, more adventurous grasp of recent technology. On the contrary, Kennedy is a mature age student who obtained a first degree in architecture in 1997 (RMIT) and subsequently worked as an architect and on related design projects until 2012, when she turned to painting more fully, seeking more expressive and direct engagement. Her concerns there ran to gestural abstraction and she remains committed to the practice although it has stalled somewhat by her own admission (her exact words: “unfit for human consumption”) awaiting her experiments with digital imaging. These are, if not strikingly original, certainly unusual in the current scene and significantly draw upon her extensive background in design, incidentally, one wants to add, urging the value of undertaking post graduate research after a period outside of academia. It is surely no coincidence that an architectural application such as ReCap should appeal and serve as novel means for tracking the vagaries of two-dimensional depiction once mapped within additional dimensions of space and time. The issue - as with so much recent painting - is really the relation of figuration, or concrete depiction, to abstraction. If one were to tie the two sides to her practice to broader trends, it would lie upon this nexus.

Some clues to a resolution lie in the suite of silkscreens. Like most of the artist’s work, they are frustratingly untitled, all 60 X 40 cm, notable firstly for their novel support, a high impact poly-acrylic sheeting with a high gloss finish. Again this is usually a trade or industrial product but here applied to fine art ends. 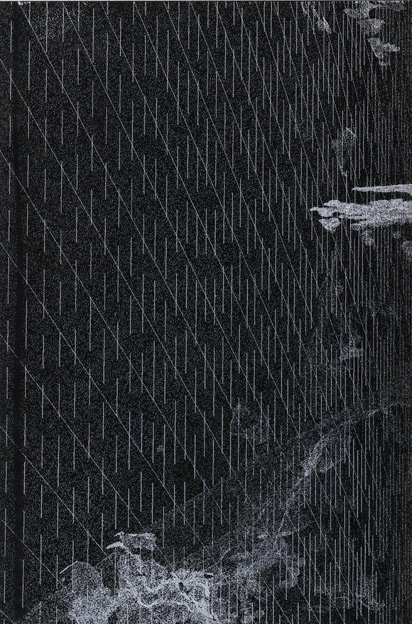 
These works are derived from a larger work, again untitled (to be shown at the end of August at the McLelland Gallery) in which a 3-D model of a tree is placed upon a nominal grass plane and perspectival grid. Here the artist wrestles the imagery away from a photographic source and a more literal reading and in confining the works to black and white, make the black background far more ambiguous as a ‘null’ setting for the model, make for an altogether darker mood, and prompt a far more abstract reading of notional depth or perspective. 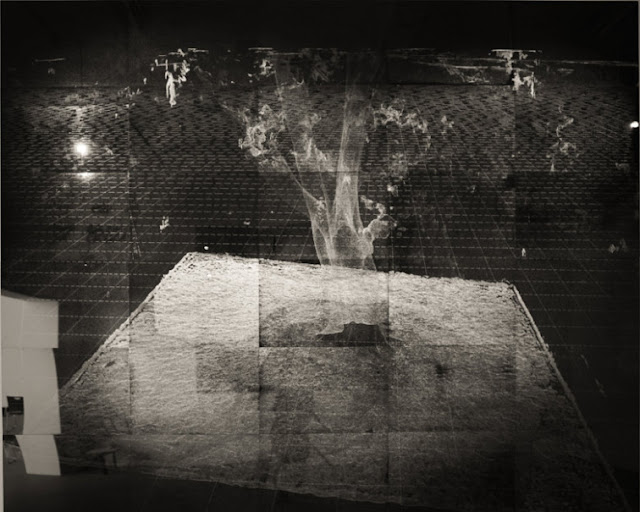 The artist considers these works addressing nature, or some broader more organic landscape and it remains to be seen how this theme may develop. Much of her preceding work however has been centred on the female figure, as confused romantic ideal or trapped by impersonal mechanisms with violent or destructive overtones. 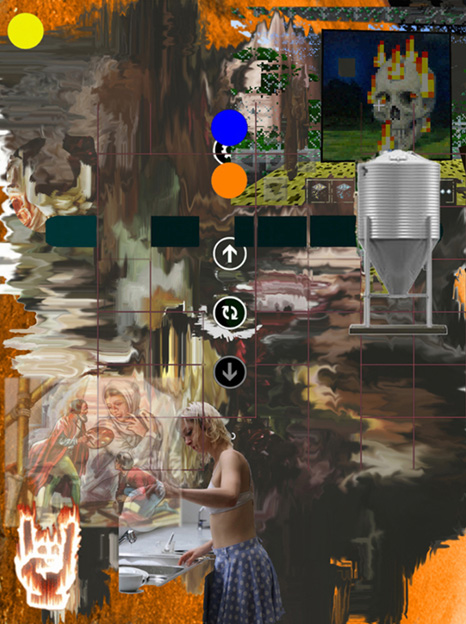 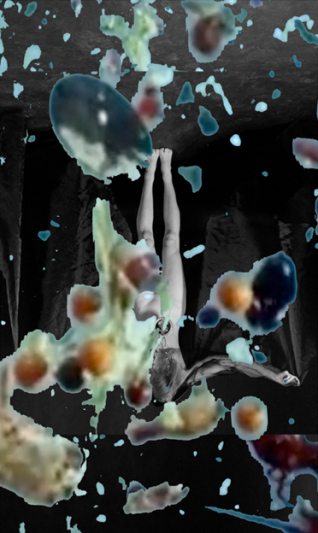 Untitled (2015) 169 X 100 cm digital print
These works proceed as fairly standard Photoshop compositing, offering a range of source imagery, from art history to online games and a dense range of layers rather than a more integrated picture plane. Indeed, the structure really appeals to an allegorical or symbolic reading, of the flow and deluge of culture upon a female life. This interest in a more iconological arrangement and grander themes soon prompted the artist to visit Leipzig in 2018 as a private initiative and to work in the famous Spinnerei studio complex, home to Neo Rauch and the New Leipzig School. Yet, for all the School’s focus upon painting, Kennedy persists with her Photoshop composites, expanding her photographic sources to include digital ‘painting’ or graphics ‘brushes’, while retreating somewhat from her starker figurative and feminine themes 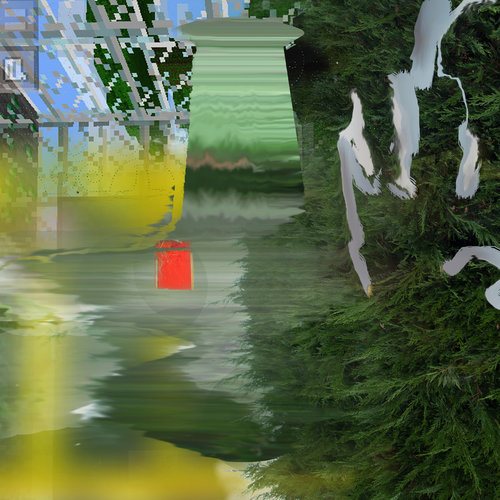 But while these changes give the work a measure of gesture or touch, they do not bring any notable breakthrough in her painting.


The real change comes upon returning to Australia later that year and adopting ReCap. This offers a more sustained picture plane and in place of brushstrokes a ragged fragmentation to the assembly of photographs. The theme of the female figure beset by surrounding forces is now neatly fused with technical issues, giving the work far greater impact and suggesting a number of promising directions, concerning more dynamic tableaux, more elaborate soundtracks, multiple channels or screens. The Blob video confines the soundtrack to the occasional quiet breath, while Selfie:Flag 4.42 offers a quiet piano loop, but these seem only starting points. In any case, for the moment we have a work of unusual and promising directions.

ALL IMAGES COURTESY OF THE ARTIST

My thanks for her time in preparing this review

The Artist’s site
This Art Life
Two Coats of Paint 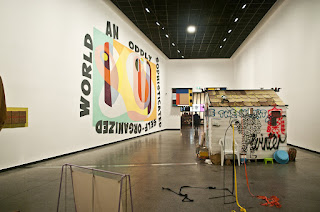