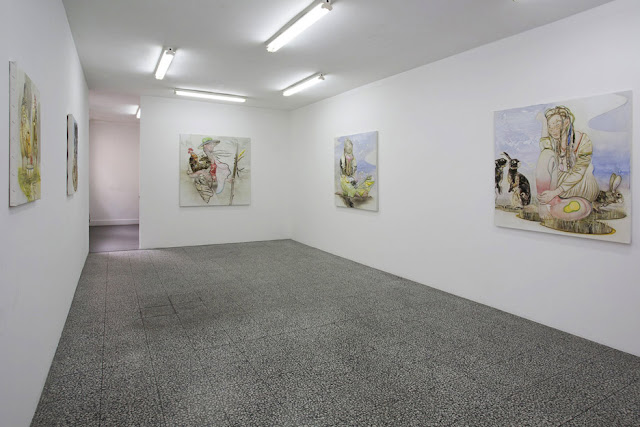 Installation view
A suite of six, medium to small oil paintings marks the well-known artist’s debut at the modest city branch of Neon Parc. The now familiar whiplash line and isolated motifs ranging from animals to trees and carnivalesque figures have forged a considerable following over the past dozen years or so, reflected in public and corporate collections, placings in major art prizes. It is an instantly recognisable style, its restless arabesques echoing a distinct local tradition stretching back through Brett Whiteley, Lloyd Rees, William Dobell and even Norman Lindsay. McMonagle is heir to an elegance and whimsy rare amongst his generation, but his achievement lies as much in finding resonance among broader strands to contemporary painting.

The work not only looks back to a venerable tradition but reassigns it to new and unexpected demands. In recent painting these shape as a wistful retreat to nature, with its own emphatic linear flourishes. It is demonstrated in a wave of overseas artists that properly begins with the work of Peter Doig and includes Michael Armitage, Till Gerhard and Jack Duplock, at times Daniel Richter and Ryan Mosley. The trend also finds local adherents in Adam Lee and Seth Birchall. Interestingly, all are male. This trend is too diffuse to strictly rate as a movement, a kind of New Romanticism perhaps, but in a globalised and polymorphous culture, it may be as close as it gets. As a broad trend, it embraces nature as an escape, a recreational sublime that commences from Doig’s holiday resorts and grows more obscure, allusive and mysterious in later work. It is above all, an evasion of everyday pressures, a brief getaway to remote and comfortable myth.

McMonagle shares none of their immersive landscape and wields a far more sophisticated line but the attention to the animal world, wild or domestic, to trees in marked isolation, carries with it a similar appeal to the natural world at some remove, animated by an insistent line. Nature here is where no input or agency is required – nor returned – but rather taken lightly or for fun, skipped or toured at one’s convenience. Hence grounds to scenes are often tidily circumscribed in playful curves, an illustrative convention that deliberately recalls children’s stories or fairytales, even where subject matter declares a more contemporary recreation, as in Dirty Dirt Bike Boots (2019). They hold their own tiny place. 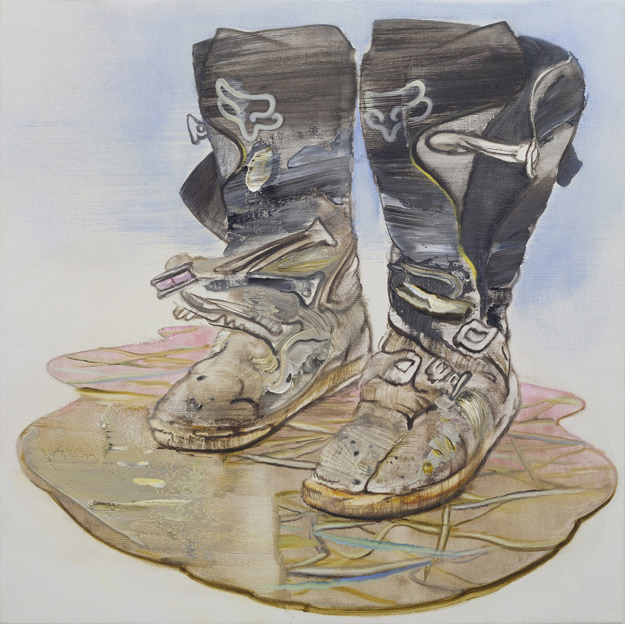 Dirty Dirt Bike Boots (2019) 76.5 X 76.5 cm oil on linen
Where Doig and followers often discern features in an initial storming spill or splash of pigment, McMonagle’s features tend to carefully fall back into impasto grounds, churning brushwork. In both cases the appeal is some larger, more amorphous background, a surging undercurrent to the act of painting.

A second strand to the work concerns the whimsical, carnivalesque figures that do not so much interact with their situation as stand for roles or ciphers, comic stereotypes. These too arise in Later Doig, but perhaps a closer match with McMonagle’s skill set would be another, slightly later British artist, Nigel Cooke. Cooke’s work is less concerned with a retreat to nature than a crumbling Modernist edifice, but his use of masks, disguises, costumed and satirical stereotypes is often of a piece with the trend. It makes for a kind of counterpoint to the retreat to wilderness, supplying a knowing procession or carnival atmosphere. The far away world would seem to call for more theatrical roles, might be the implication. In McMonagle’s figures, with their extravagant costumes and poses, faces tend to be notably delicate and quizzical. They gently mock their situation and with it the confines of their world. Like Cooke, McMonagle is an ingenious and exacting technician and the array of techniques at work in a composition can as often signal virtuosity as opportunity or happenstance. This however, counts as a limiting trait of the trend. 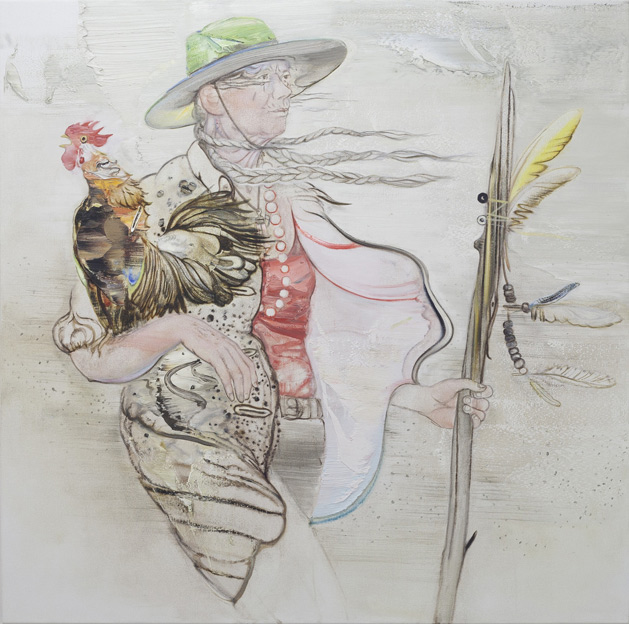 Put Upon (2019) 137.5 X 137.5 cm oil on linen
A recent development in McMonagle’s work has been the figure holding an animal, embracing a caught fish, carrying a rooster. Yet the sense is not of control or conquest but rather equivalence or equality, a shared plight. In Put Upon (2019) - at 137.5 X 137.5 cm the largest work in the show - an older lady merely rests a rooster on her arm, while her other hand supports a tribal lance. The unusual mix of costume and accessories declares a remote or alternative lifestyle, the free range cockerel literally one wing to it. This is a change from earlier, more passive and decorative figures and with the inclusion of a lance or spear, strikes a somewhat wary note. Here the escape may be historical, contemporary or mythical, the character new age or old age and this ambiguity perfectly paces the trend’s overseas exponents. 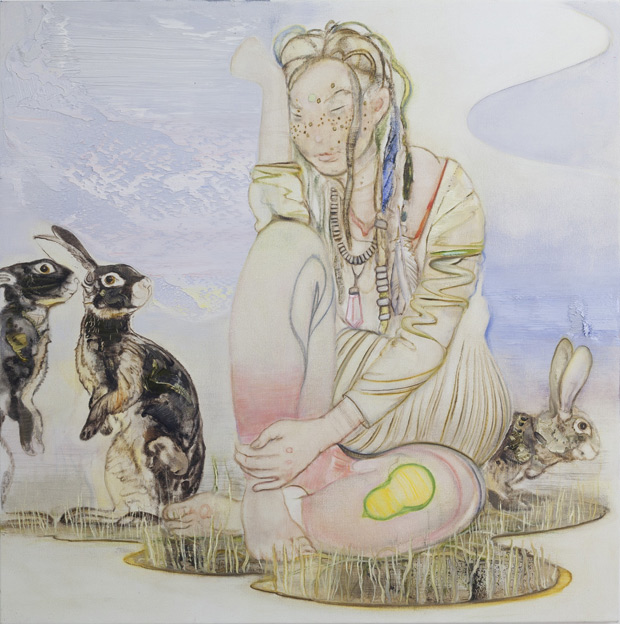 Black Hares (2019) 117 X 117 cm oil on linen
A smaller work, Black Hares (2019) underlines a kind of parity between figure and animals. The young girl, again in a vaguely tribal costume and grooming that may be traditional, fashionable or just fantasy, sits contemplatively amid a field of curious hares. Incidentally, the cropped or off-centre hares to the left of the picture also mark a compositional departure for the artist. Crucially though, the young girl attends not to the hares but some inner, mental event. She is, in a sense, no more approachable or amenable than the wildlife. She is pale or frail, the whole scene literally a tentative rendering in which design again toys with the resources of line, nods to an emergence from technique. In reproduction the figure looks more straightforward, even cursory, but on actual inspection so much of the figure is rubbed or tamped back, blurring lines, modifying tones, the sense is more of myriad adjustments and an array of techniques. Similarly, the enormous spatula drags of pale blue and white to the background sky scarcely register on screen but are seriously impasto, perhaps more than a centimetre thick, lurching right up to the edges of the painting.

So far the review has been intent upon establishing a general context – a spirit of the times – and the inflection of meanings that flow from that to McMonagle’s work. But other features are more specific to the artist’s approach. Two in particular subtly refine meaning. The first is the almost exclusive use of a square format, regardless of scale. Early in the artist’s career he experimented with rectangles but ultimately found the dichotomy between portrait and landscape formats too pre-emptive and steadily converged upon a square as a way of avoiding the expectations of landscape or figure. There are of course vertical landscapes and reclining figures, but for the artist it is the initial blank shape upon which he seeks to project his vision that must be negotiated. Significantly, in terms of the general trend, he already looks to evade preconceptions, to escape routine.

By dint of geometry, a square picture also suggests sturdiness or stability and here provides a shrewd contrast with the flowing line and sweeping vigour of a composition. This is particularly acute in the paintings of eucalypts, such as Four Strong Winds (2017) where the very verticality of the tree is challenged and tellingly, where the trunk balances the scattering arabesques of its outer branches, so that escape or distance subtly acknowledges security or fixity at some point. That said, no tree paintings were included in the show, but the compositional device applies throughout the artist’s work and the example usefully augments the theme of recreation or escape. 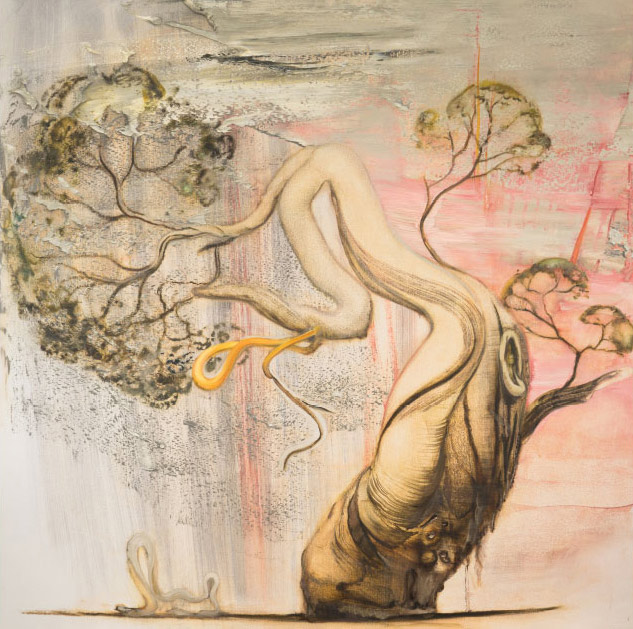 The Four Winds (2017) 137 X 137 cm oil on linen [NOT IN SHOW]
The second feature concerns the selection and segmentation of subject matter. While sweeping curves unify and direct a subject, drawing also imposes a segmenting of parts that disrupts standard focus and proportion. Parts may take on a more decorative or abstract function, toying with figurative readings. The most familiar example is surely the artist’s 2012 portrait of local patron Michael Buxton, where an array of blisters across the subject’s face take on a kind of makeup or cosmetic disguise, distracting or defusing what would otherwise be an intense confrontation. 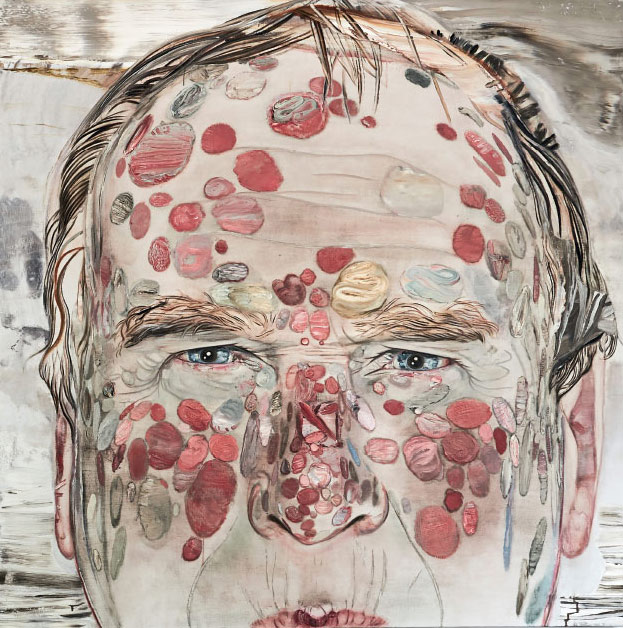 Michael Buxton (2012) 168 X 168 cm oil on linen.[NOT IN SHOW]
In other places a figure or animal is similarly compartmentalised, occasionally disrupting proportion, but more typically simplifying detail within a recognisable outline. In the current show World on a String (2019) is a good example of this segmentation and decorative redistribution of elements. 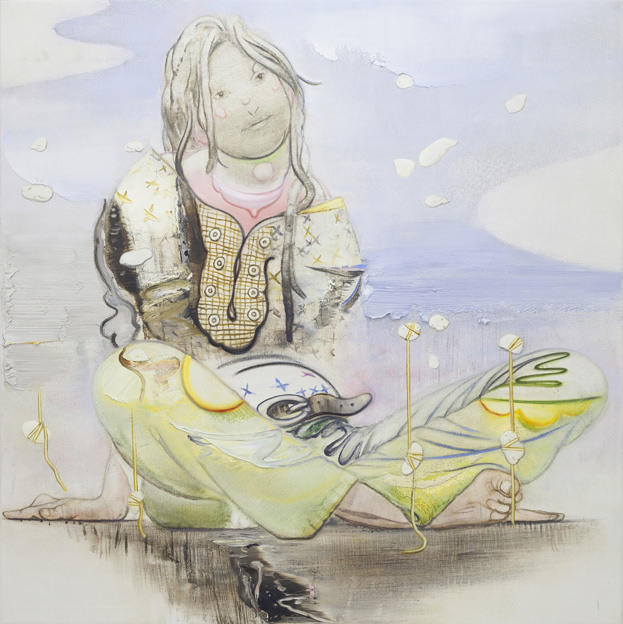 World on a String (2019) 117 X 117 cm oil on linen.
Here we do not escape to a fairytale character so much as hold her realisation in check. Again, we have the palest, most delicate of worlds, where even gravity seems tentative. But this is really to take depiction on holiday, to see the sights, stretch abilities and discover oneself for the effort.

In lieu of a larger venue, the show provides a welcome opportunity for Melbourne to update the artist’s development and confirm a proven talent.

ALL IMAGES COURTESY OF THE ARTIST AND NEON PARC.
MY THANKS TO BOTH FOR HELP IN PREPARING THIS REVIEW.