This is the artist’s second show at the gallery and the title alludes to the duration between shows, as if a matter of strict surveillance, or perhaps an anxiety with absence. The show comprises eleven mostly large, vertically-formatted works, around two metres high, one and a half metres wide, oil on canvas, all but one from 2018 and a twelfth work listed (and sold) but not shown. The new work represents a departure for the artist with overtly photo-collaged source imagery drawn from auction and art prize catalogues, arranged in jaunty diagonal slices across the picture plane. The range of imagery, often details of noted paintings, would seem to invite a Post Modern pastiche or eclecticism but this is firmly rejected in favour of a loose, sketchy treatment, curiously held in check by the strict edges to slices and the lightly ruled grid used to transfer the composition to the canvas. 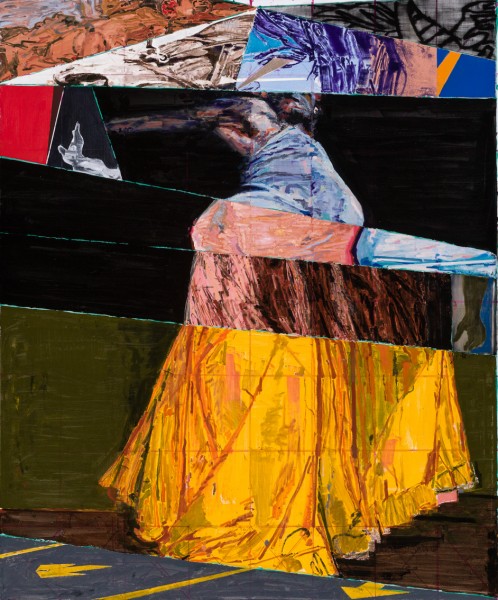 The strange tension between rigour of plan and relaxation of execution fairly crackles through the halting facture, thin surfaces and skirted edges. One senses the provisional, hesitant resolution before discerning what more the pictures may be about. It also explains why the pictures need such an imposing scale in which to adequately display this puzzling structural feature. They simply would not read as vividly at a smaller, more cramped scale. A more conventional approach would surely have treated the edges to slices in exactly the same way as their subject matter and perhaps dispensed with an accurate scale transfer (and thus grid) entirely. But the artist is clearly intent upon something more than merely a freehand and summary treatment; the dissolution of fragments into something more abstract. And this is a sign of quiet ambition as much as personal preference. Rendall seeks a measure for his engagement, a framework within which to judge how strictly or loosely his rendering need be; both to identify the content and to register as his signature or involvement. The pragmatic process duly expresses a troubling ambivalence, the artist’s attitude by turns carefully cavalier or a dashing diligence. There is, in other words, an intensely self-conscious or reflexive aspect that the artist links both to a distanced (perhaps debased) cultural heritage in source material and to previous work involving CCTV surveillance, as if in a feedback loop (although this is not as CCTV coverage is generally understood).
The compositions, while scattered, are not without an overall gestalt that more or less discloses a single figure in works such as Recent Developments (2018) I, II and III, Tiriel (2018) and Schachill (2018). 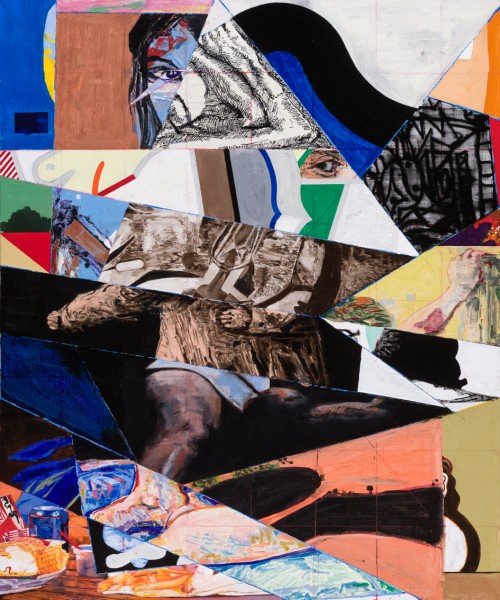 In Furniture, Decoration, Ceramics and Carpets (2018) and Enquiries (2018) the sense is much more one of domestic interiors with a dense clutter of slices while Following Submission (2018) with its scattered greenery and skies carries a distinctly landscape orientation. 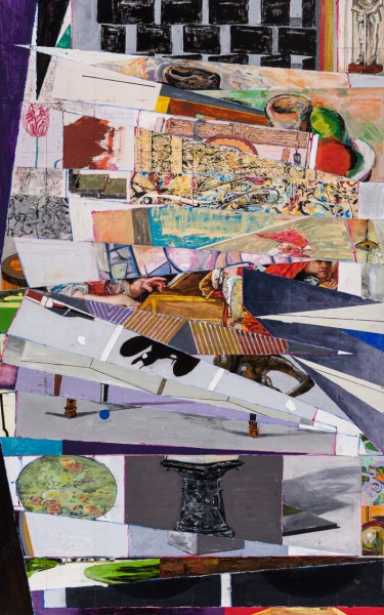 The slices thus take on a kind of macro-Cubist function and in the case of figures, assemble a person across a range of circumstances and hint at ellipses or secrets. The impression of an accumulated stack of instances and their discreet editing echo concerns in earlier work where the artist dealt more straightforwardly with warehouse storage and retail shelving as symbols for social categorisation and preservation, while works derived from CCTV footage dealt in a more temporal collection of motions and an unwelcome scrutiny. 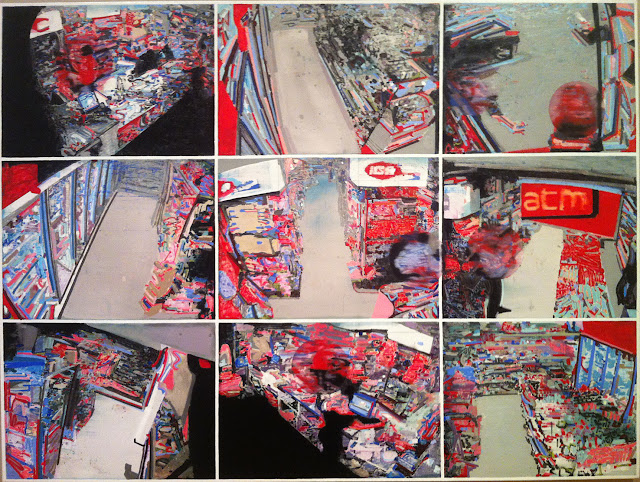 But where earlier work touches on these themes through simply broader treatments of colour and tone, more recent developments have reined in the impressionistic approach somewhat and look to stricter constraints. The shelving and CCTV camera angles have now become formal or structural elements rather than subject matter and grant the artist a greater range to persons and situations while preserving themes of category and scrutiny, censorship or ‘redaction’ a term the artist adopts from the U.S. military’s reluctant release of sensitive documents. 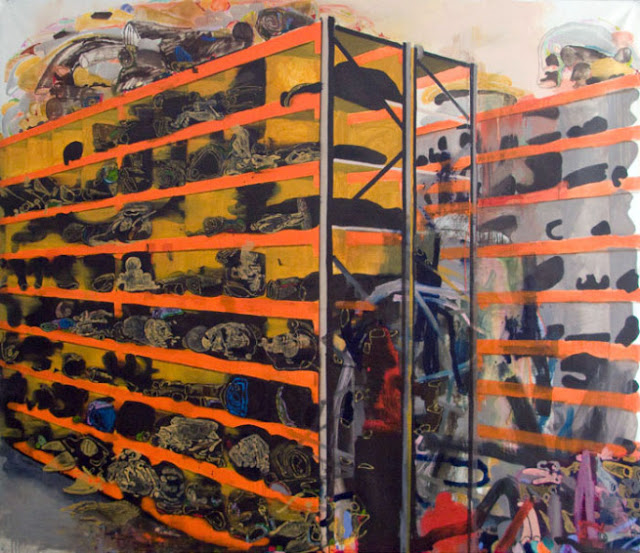 Interestingly, mere storage and category acquire a dark connotation in earlier works where items are obscured or censored through painterly handling, as in Redaction II (2010) while other works attribute a morbid or failing outcome to such practices as in Cadaverous (2010) while still earlier works associate painting itself with death or a zombie existence. The current work retains some of these dark corners but in relaxing sorting or category to subject matter, in general the work finds a less ominous tenor. The mood is more middling and circumspect. As noted, the free handling is now shrewdly managed; indeed the busy artist often uses individual slices to a composition as convenient goals for his tight studio schedule. The work is economical in many senses, in its images sources and cropping, in its methods and rigour, indeed even in its resources and means. In this respect, the towering Following Submission (278 X 173 cm) is the show’s most replete demonstration of the artist’s commitment to making the most of opportunities. 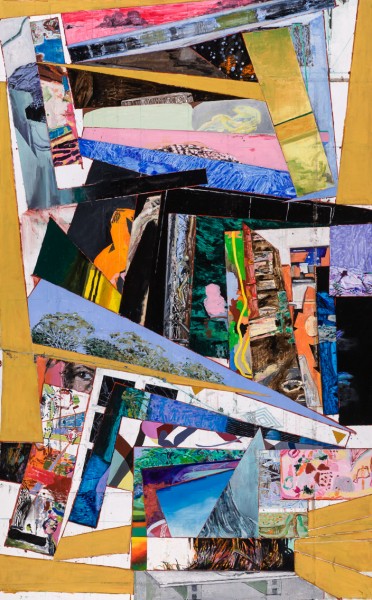 The canvas support on close inspection comprises a number of glued strips and patches, in other places awkward folds and tack holes from where it was assembled on the studio wall. All rehearse the collage composition and slices, all extend the niggardly handling and diffident compliance with source imagery. The work literally embodies the artist’s scavenger and improvisatory instincts, his reluctance to waste anything, conversely, to lavish too much on any stage or feature. The work finds the artist literally at full stretch, even before a stretcher. The added sandy ochre to blank areas or background, further grounds the landscape on multiple grounds.
All of these aspects reinforce the role of painting in examining print imagery and our encounters with and within it in urban life. This provides a very broad context for Rendall’s contribution. It is also worth noting that the artist has been active as a curator on a modest level around Melbourne, selecting and organising group shows together with fellow artist Bryan Spiers between 2003 and 2009 at West Space, The Red Lion and Conical in Fitzroy and at The Alderman in Brunswick East in 2014. The concern with category and sorting is thus no idle theoretical point, but quickly extends to art and the artist’s life. 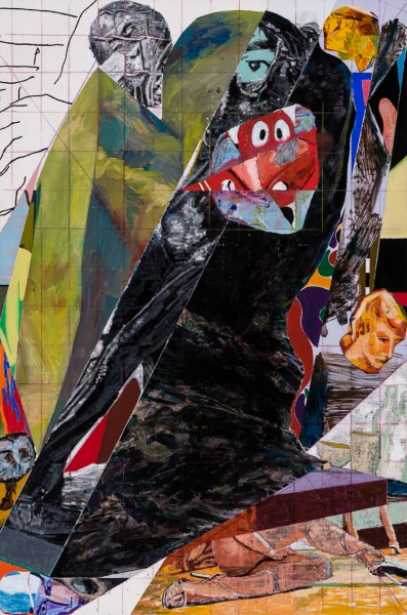 Initially the artist planned to exhibit the roughly A4-size photo-collages along with the paintings but sundry amendments and distress eventually left them too scruffy for public scrutiny. Photo-collage has been a source of inspiration for painting since at least the work of Max Ernst and includes later contributions from the likes of James Rosenquist, David Salle, Robert Longo and even Martin Kippenberger, to look to overseas precedents. Rendall’s approach has been more abstract, positing a more diffuse, allusive meaning and is of interest currently given the local revival of abstraction in painting. But while photo-collage is prominent in the current show, it is not the only plank to the artist’s project. Downstairs in the gallery, the imposing Psychomachy (2017) a finalist in the last year’s Darebin Art Prize, is a useful reminder of other formal options. The work could not be accommodated in the upstairs gallery and had to settle for the small foyer to the car park entrance. Its tangle of “heads on sticks” as the artist wryly refers to them, while still drawing upon diverse photo sources, offers an alternative arrangement for persons pictured as many moods or faces. 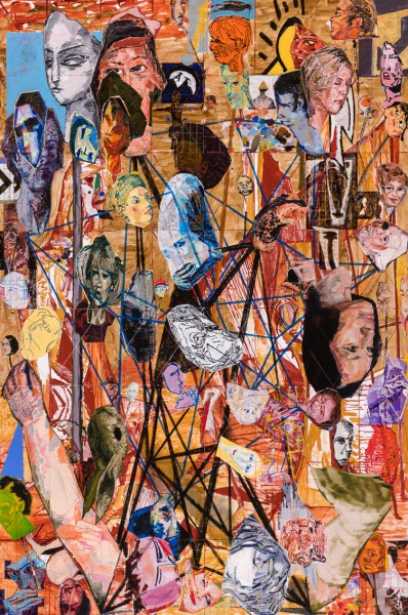 The title undeniably suggests conflict or confrontation in how many faces a person may have, even schematically, how many people a mood might derive from. The psychology implied is frankly chaotic and the painting is suitably fraught. The work is far denser than the rest of the show and repays extended viewing, although this is not easily accomplished in the modest car park entrance.
Finally, mention should also be made of the accompanying show downstairs by gallery veteran Euan Heng. The contrast between Heng’s modestly scaled, severely refined icons and restrained palette with Rendall’s sprawling disparities and chromatic dissonance is astutely judged and works to the advantage of both shows. The complement has a personal side as well, since Heng was Rendall’s doctoral supervisor at Monash University in 2015. Both shows are warmly recommended.

All images courtesy of the artist and Niagara Galleries.
My gratitude to both for assistance in preparing this review.