The artist provides an array of techniques in a torrent of small, mostly casual works as he continues to refine a vision divided between the whimsical and disturbing, rapturous close-ups of faces and broadly schematic, often sexualised figures. Collage here is less a matter of photo or print montage, than the assembly of smaller sketches into larger chart-like arrangements, suggesting various social relations. The work arrives at a more complex level of abstraction than usual, juggling figuration in layouts, the discreet pasted patches to the ground also evoking something of repairs or trophies. Previously Cox has adopted themes such as Dante’s Inferno, witches and animals to focus his varied approaches but in the current show the range is presented as more or less just a progress report. A number of works take the title of Psychopathia Sexualis and within the bodies and faces, sexuality as preference or disposition is clearly to the fore. Cox has also published a number of papers on Queer identity in art, but his pictures take a more freewheeling approach, all things being swept up in permutation and transformation. But the seventy-five works hardly confines themselves thus. Other works take historical and literary figures and events as subjects. 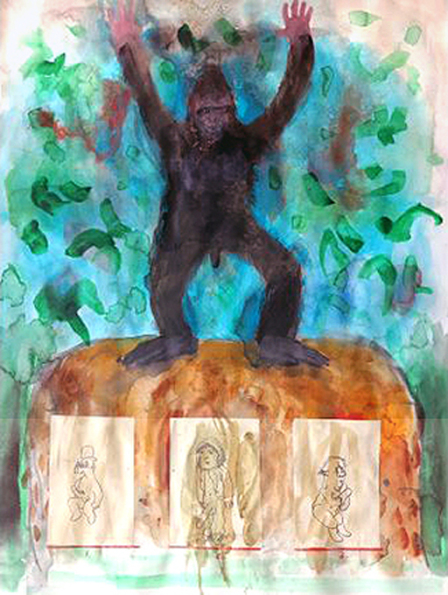 Yet the work remains firmly focussed on the figure, landscape, apart from backgrounds, and still life hold little or no interest; even portraits of actual individuals, among the paintings, are quite rare.  Stylistically, the work is distinctive for its Jekyll and Hyde approach, a duality that swings from the exquisite delicacy of faces, particularly in watercolour, their highlights and modelling invoking realism, to the broad linear figures aspiring to a more stylised realm, a more terse and comic tone. It is a mix that seems to have been present from the start of the artist’s career in the early eighties and there are works such as Neanderthal (1983) that would not be out of place in the current show. There have also been works where the two approaches converge, such as Myra Hindley’s Dream (2010) where the schematic approach receives more nuanced and tonal treatment. But in general the work oscillates between dashing linear summaries and slower tonal refinements. 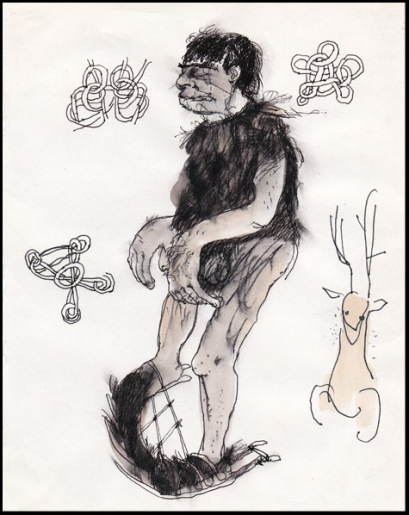 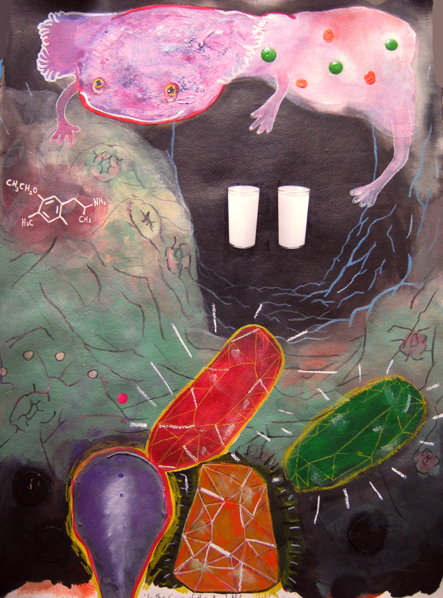 The reasons for this are a matter of character and interpretation obviously, but their stylistic roots are easier to trace. As a high school student, Cox’s artistic idols were the British Pop artists, particularly Peter Blake and R. B. Kitaj, the former for his confident, frontal, public poses, echoing publicity shots, the latter for his Surreal drawing of the figure, cropping and combining it in unexpected and precarious attitudes. Already there is a distinct difference between the fixity and populism of one and the evasive shifts of the other. Interestingly, the influence of David Hockney is much less prominent, evident mainly in Cox’s life drawings. Attending the RMIT (1978-80) Cox then encountered the work of lecturer Gareth Sansom and a more irreverent and absurd approach, influenced in part by the work of the Chicago Imagists. This more relaxed, cartoon-like style proves all but impossible to reconcile with prior influences for Cox so that the work simply alternates between skittish black humour and earnest themes such as murderers, male prostitution and recreational drugs. Myra Hindley’s Dream is a good example of the grinding of gears as one attempts to balance a playful approach with a disturbing subject. Some things, even as titles, are not for joking about.

But in general the drift has been away from the interlocking planes of Kitaj, still evident in works such as Ronnie Kray in Broadmoor (2008) and toward looser construction such as Edward Evans – A Night on the Town (2010) – Evans a Moors Murder victim. 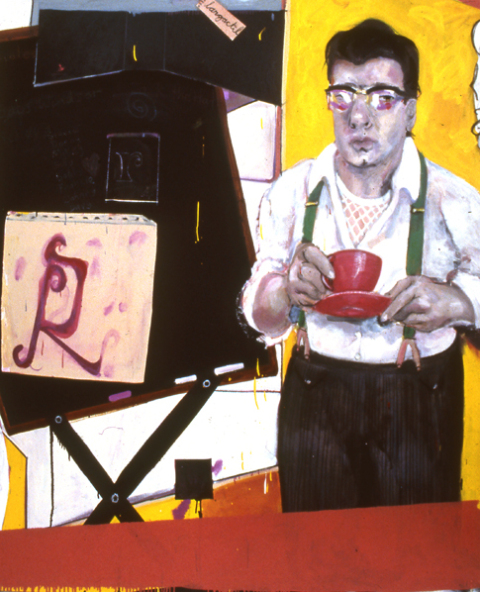 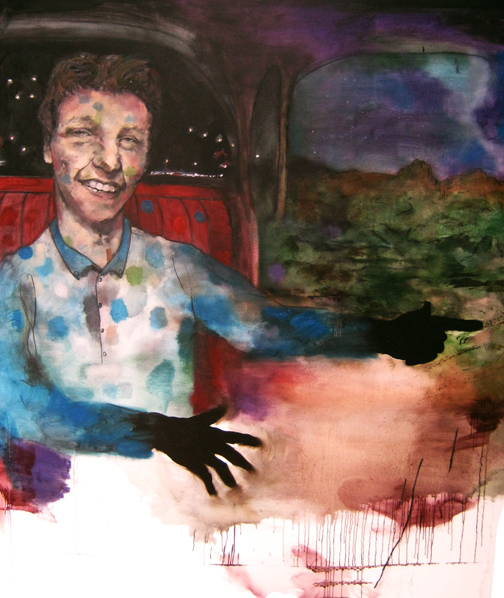 Because so much of the artist’s recent output has been small works on paper which considerably adds to the spontaneity and intimacy, it is easy to imagine than this is a preference. In fact it is no more than a practicality given the artist’s circumstances. There have been occasions where he has applied his flowing watercolour technique to much larger compositions (simply by laying a canvas flat). Edward Evans... is a case in point. And obviously larger works allow room for richer and more detailed development, so that their absence is regrettable. However, other changes have made the most of his constraints. The drift has also been away from dark, historical subjects such as the Moors Murders and to freer fictional themes like generic witches or animals. Here there is no conflict between whimsical treatment and solemn content and the artist’s imagination achieves new confidence and surprising characterisation. The works often feel like children’s story illustrations growing slightly too scary. It is perfectly judged and no doubt the result of experience and greater resolution of a number of issues, not least a lowering of ambition and forgoing scandal. Interestingly, where the artist takes on a more literary theme, like Dante’s Inferno, the results are mixed. This is probably because ambition again creates problems for a sustained treatment. The series fractures into comic demoniac heads and photo-collages that attempt to render an industrial vision of hell, but the results are a little disappointing. This is not quite the problem of a schematic arrangement, but rather a contemporary landscape as metaphor. As noted, landscape is not something the artist has been inclined toward. It is an issue the artist may yet return to - one senses it is certainly within his grasp - but on the strength of the current show it is the issue of abstraction or greater stylisation that now receives more attention.

The two things are not unconnected though. As noted, works assemble or patch together a kind of map for a person, as in Drizzle Puzzle (2016). 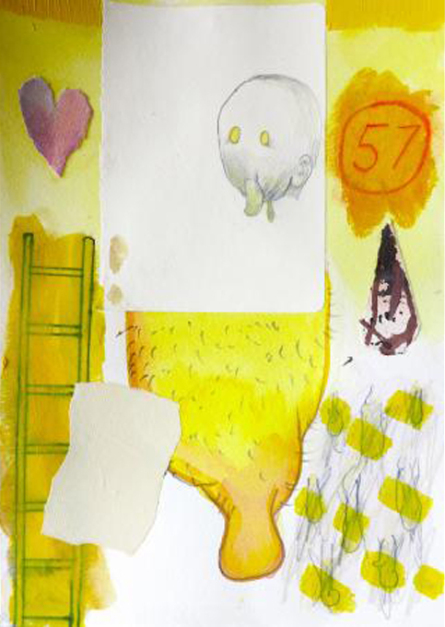 But at certain points the fragments themselves may be so stylised that a surrounding layout only adds to the abstraction. In these cases, Cox occasionally reverts to a landscape. In Vision at the Lake (2016) and The King and Queen of the Birds (2016) the artist invokes a deep space that gives the figures a setting rather than other parts to their person. 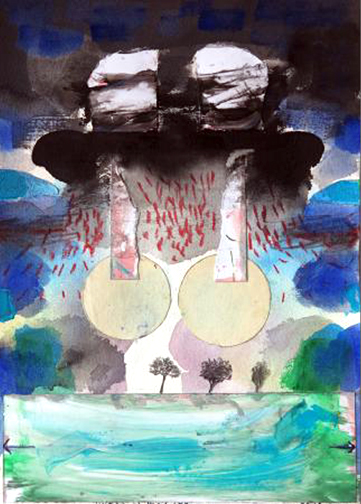 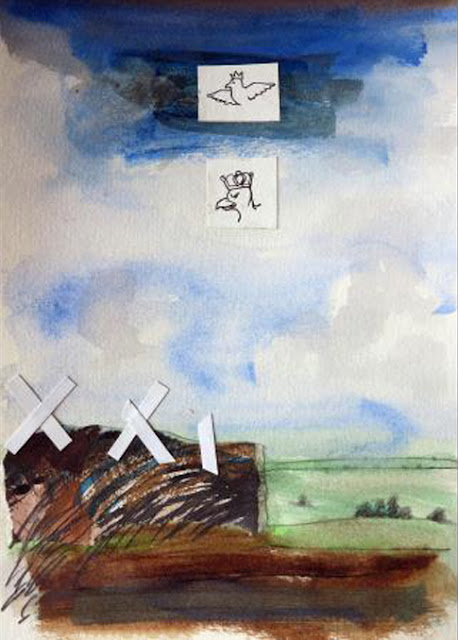 These are modest developments obviously but they indicate a little more scope, in the way a sustained background may also be used to arrange more stylised fragments. For Cox, this is unlikely to rival the attractions of the direct stare of an isolated face of course, and it is with the series of ten heads at the front of the gallery that the artist stakes out bolder territory. It is surely a mark of their precedence that these works are also on canvas, slightly larger than most of the show (35 X 28 cm) in acrylic, oil and enamel as well as pencil. In works such as Juan Carlos (2016) and Ramone (2016) the artist gives us portraits of actual individuals – but only as pencil studies incorporated into a larger collage. The drawings notably adopt delicate cross-hatching for tone, emphasising a classical linearity and restraint. The artist, quite deliberately appeals to tradition. Against this, the paintings variously assemble flesh coloured palettes, lush impasto and sweeping gesture in sonorous hues. These do not stylise a setting or extension for the heads but rather offer a more visceral, expressive response, a metaphor for greater realisation, immersion and chaos. 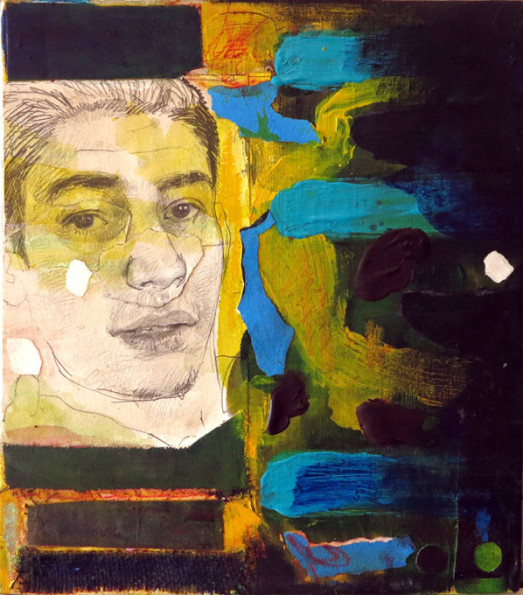 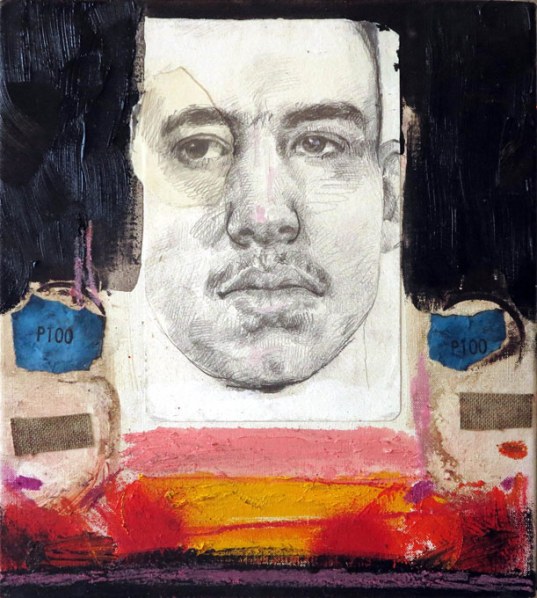 These are unquestionably the highlight of the show, so much so, that one wishes there had been just a little more editing elsewhere. Even small works need breathing space. But as a show, an excess of inspiration is surely preferable to a dearth and if the works sometimes have troubling themes, it is finally about working through them – feverishly - knowing when to make light or toy with one’s demons, knowing what to take away from them and hurrying. This is also a show about how painting pictures conveys meaning unavailable anywhere else.

All images courtesy of the artist and Mora Galleries. My thanks for their assistance in preparing this review.