The show comprises eleven works ranging from medium to large oils on canvas and includes two from earlier phases in the artist’s career, reminders of underlying consistencies as well as the latest restatement of his The Lure of Paris (2016) in which Babar the Elephant dolls are staged in scaling exploits on a seaside cliff at evening. It is a nicely judged selection for the space. The centrepiece is unquestionably Pin Cord (2016) at 177 X 380cm, a storming panorama that was used in a drastically enlarged photographic form for this year’s mural for the Museum of Contemporary Art’s foyer in Sydney. There it measured an imposing 7 X 16 metres. However, the artist deliberately played no part in the installation and cropping of the work to accommodate the entrance stairs and this, together with an unavoidable softening of focus to the print, gave the work a separate identity that merited its own title – Cord du Roi (2016) – a Franglais play on corduroy, but otherwise typically opaque to pictorial meaning. 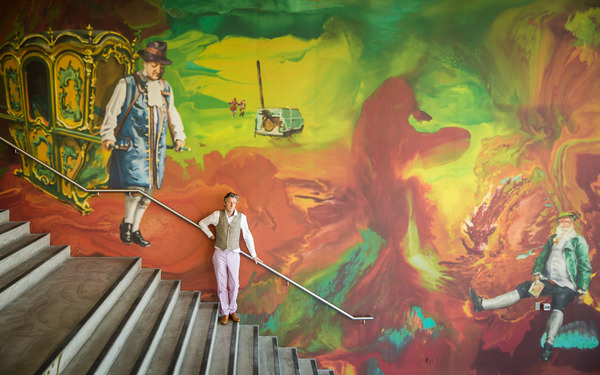 The painting gives full rein to the artist’s characteristic poured enamels and marbled blending, subtly worked into bright alpine backgrounds for costumed and historical figures, various architecture and farm animals. The colour is not quite as garish and anti-natural as in previous years and foreground elements are a little more sparing, making for a more measured, suitably expansive arrangement. But essentially the work continues to balance a flowing, transient world against a disparate clutch of poses and facilities, never quite integrating person with place, never quite sustaining either. The show title ‘Festooned’ thus might apply to the flowing linkages between isolated objects as essentially decorative, or conversely to the objects as decorating the flow of the land. The churning landscape could easily suggest erosion or landslides, an ecological agenda, but somehow the mood is always light, the skies blue, distant peaks sparkle and the surging surroundings register more as fantasy on endless opportunity and acceptance. The initial impression is a strangely numbing sense of remoteness or inconsequence. It is an impression not easily overcome.

Earlier work dwelt on post-colonial themes of mythic discovery mocked and an estranged or baffling heritage but throughout this century the concern has steadily shifted to nature at its loftiest, as fantasy or hallucination and to a stylistic array stretching from abstraction to figuration, a range that cleverly parallels human presence upon a wilderness landscape, history after fantasy, fixity over flux. It is an elegant structure, not just for settlement or exploitation but for its fleeting, fractured impact, for the impermanence of culture. Colour too ranges from flat, brilliant hues to the niceties of costume and tonal modelling, not quite to realism but rather an approximate for whole areas by distance or terrain. Yet the structure is not simply one of smooth integration but of degrees of disparity. The work is also noted for its collage-like placements of foreground objects, particularly figures, buildings and farm animals that highlight conflicting tonalities, scale, perspective and detail. These elements almost fit, or fit only in certain ways or with certain parts, so that continuity steadily weakens with their placement, splinters into fragments.

This aspect also has its painterly component. Selected objects are often broadly brushed with decided panache, a tendency that has amplified in recent years, giving them an assertive vigour, a fluent, confident facture. Here fluency contrasts with fluidity. Where initial pourings emphasise a passive pooling of energies, dashing brushwork is keen to summarise and declare limits. This is particularly true of figures. It is notable also that while figures allow free summary and an expressive flourish, matters of proportion, perspective and tonality are maintained. The expressive for Bush is never Expressionist. In the present show, the small work Coonil (2016) is probably as close as the artist has come to Expressionism in figures. Similarly, the work is never impasto or heavily worked because so much of the artist’s touch stresses brevity, placement and even timing, a ‘one touch’ confidence that brooks no doubt or struggle. 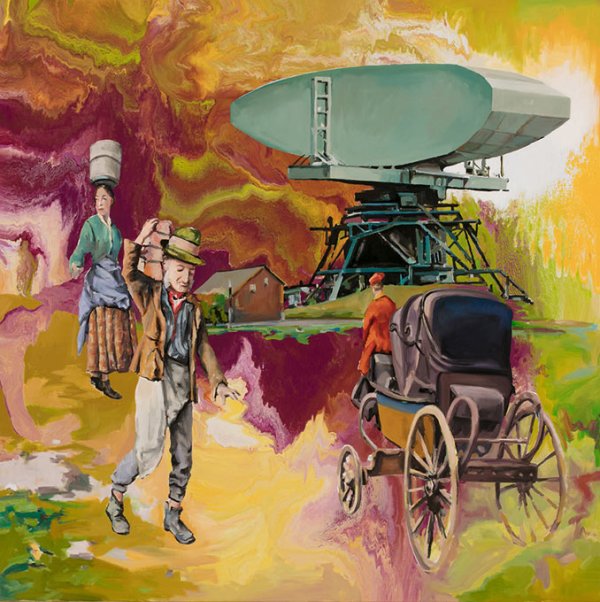 Taken in combination, the two sides to pictorial structure tend to hold one another in check. Terse brushwork declares a limit to flowing licence, flowing background measures the extent of brushed vigour. On these terms, the work reveals something more like a personal or psychological dimension. The distance or detachment of historical fragments flags not just an absurd history or chaotic nature but a curious frustration with roles and identity, with an adequate selection of artefacts accordingly. The goal is not just to maintain the picture space but to suitably develop it, to cultivate it in the fullest sense, which involves priorities. Here the work finds greater traction, at least for this critic. Permutations on the structure have steadily increased with the inclusion of the figure to this phase properly commencing around 2008, poured areas sometimes replaced with broadly brushed enamels from around 2011 and contemporary and administrative buildings introduced around 2010. Occasionally the work grows more abstract, all but abandoning landscape, as in A Mule Called South (2012) while smaller works sometimes return to the monochromes of an earlier phase, as in Lady Campbell Weed Lord Adelaide (2010) where the gestural is carried through to a more familiar abstraction in the background. But these forays only reinforce the underlying structure to the work since the introduction of poured enamels in about 2003. 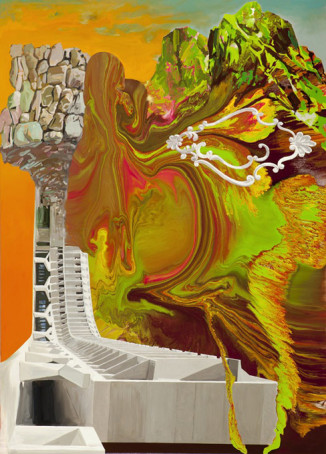 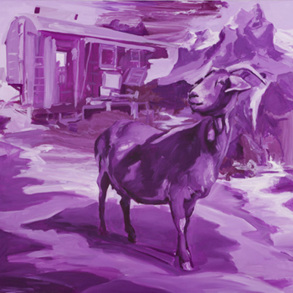 In the current show perhaps the most intriguing departure occurs in Bride of Lammermoor (2016) where an alpine setting is replaced with a lakeside and distant institutional buildings, possibly partly submerged. Here it is the foreground that is loosest or most painterly, distance that lends focus and stability. 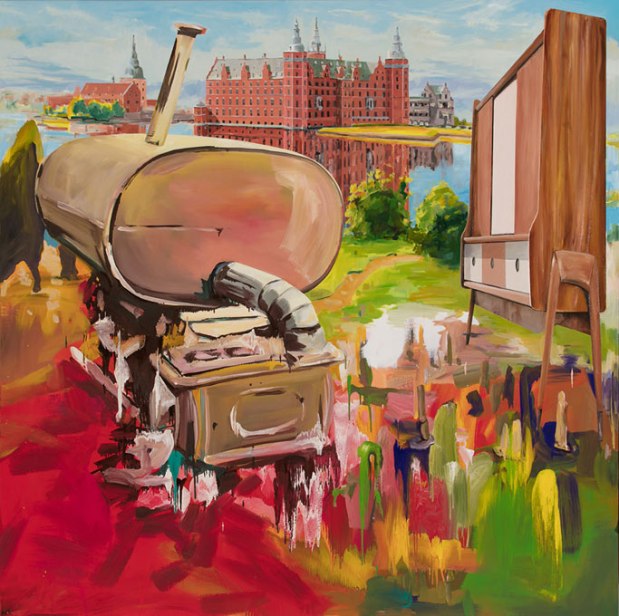 Here also it is a contrast between primitive industrial equipment, given vigorous treatment, a stylish mid-twentieth century sideboard asserting a rival perspective in realist mode and a distant administrative edifice, significantly, on the other side of a body of water. The contrast is not really between the flowing and the fluent now but rather the cursory and the diligent, the sweeping and polished, the familiar and formal. It is not hard to see differences between labour, luxury and governance in their positioning and why governance should enter the picture where nature is at its flattest and together with luxury steer the picture to calmer waters. But calmer waters do not always run deeper and divisions within culture carry a much less compelling pictorial continuity than nature at its runniest, ground at its height. While the work is interesting thematically, stylistically it does not quite have the expected punch. Perhaps the distant buildings needed just a little more contrast or saturation (or that could be just the habits of a Photoshopper).  It may be that artefacts need some stricter linear or tonal stylisation rather than a default realism to effectively contrast with the impulsive and gestural. It may be the landscapes will become more urban. For this we must wait to see how Bush continues his project. Whatever happens, it is most assuredly a sophisticated and relevant one.

This last point is worth urging, since of late the artist’s reputation overseas would seem greater than at home. While he has shown with distinction in America and Europe in solo and group shows over the past twenty years, been included in the vast global compendium of contemporary painting, Vitamin C, in its 2011 edition for Phaidon and continues to enjoy Arts Council favour, strangely he was not included in the comprehensive survey of Australian art at the Royal Academy in London in 2013, nor in this year’s survey of contemporary painting at ACCA – ‘Painting. More Painting.’ The reasons for this no doubt involve changing art world fashions and politics, but one suspects the work falls from favour firstly  because of its detached and calculating character. Bush is hardly alone in this, here or overseas, and in lesser hands the approach has resulted in stale academicism. Yet at its best it is pursued with profit by artists such as Neo Rauch, Adrian Ghenie, Marius Bercea, Nigel Cooke and Guillaume Bresson, all of whom are Bush’s juniors. It is an approach that suggests Surrealism in its absurd fantasies but continues these to stylistic issues rather than a monolithic realism. It broadens the interest in myth to more topical and historical content, albeit one that remains suspicious of sources and means. As yet there is no convenient label for this style, but it is hard to conceive of contemporary painting as a serious undertaking without it. To complain that Bush’s work is too circumspect or clever for example, is to trivialise expression, cheapen style. The work continues to find ways to resist the easy way out.

All images courtesy of the artist and Sutton Gallery. My gratitude to both for assistance in preparing this review.