The artist is renowned for her expansive project built upon collage, extended to vast, site-specific wall assemblies, to costume, dance, video and sculpture, all reflecting a focus upon the feminine in distinctive terms. In recent years, shows in the modest rooms of the Sarah Scout Gallery have provided a more condensed restatement of her themes. While her reputation hardly needs further commentary, the opportunity to reflect a little further upon some core meanings finds a convenient occasion. 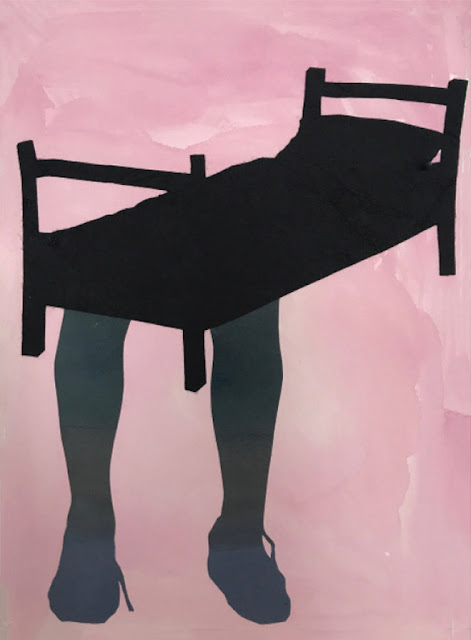 The title of this year’s show, Assembly (Daughter Architect) takes up a theme from an earlier series (2001-4 approx.) in which a parental relation is bracketed with a building planner, to suggest inheritance as well as a controlling design, in effect, the rival determinations of nature and culture. They may be taken either as aspects to the one woman or contrasting roles, as adjective to the other’s noun. This poetic pairing of unusual and contrasting terms recurs throughout the artist’s work, sometimes invoking formal or technical issues as in Shadow Farm (2001-4) Painting In The Dark (2004) and The Choreography of Cutting (2017) at other times alluding to ill-health as in Design Therapy (2001-2) Femmage, Shadows and Symptoms (1998-2004) and in her earliest works, Mad Woman In The Attic (1989).


The figure obviously remains central throughout the work and is almost exclusively female. Yet for the most part they are rendered as hardly more than costume, vaguely historical or traditional, often as dancer or puppet, initially confined to outline or silhouette. The theme of a guiding plan against family bond is thus played out as toy or celebrant in a curiously dry, indeed puritanical version of femininity. There is for example no concession to sex or sexual allure within the feminine here, nor to conventional notions of nurture or care for the very young, infirm or old, for pets or gardens, for domestic order and ornament, things usually associated with femininity. On a lighter note, the absence of phones seems frankly implausible given the brief. Nor do figures represent feminist ventures into traditionally masculine realms of say, professions and trades but rather inhabit a more remote, abstract realm, a metaphorical framework often based upon a ruthlessly pruned tree or architecture that equally remains little more than silhouette or diagram. Figures also tend to avoid or omit a face and deal instead in anonymous poses, schematic identities. 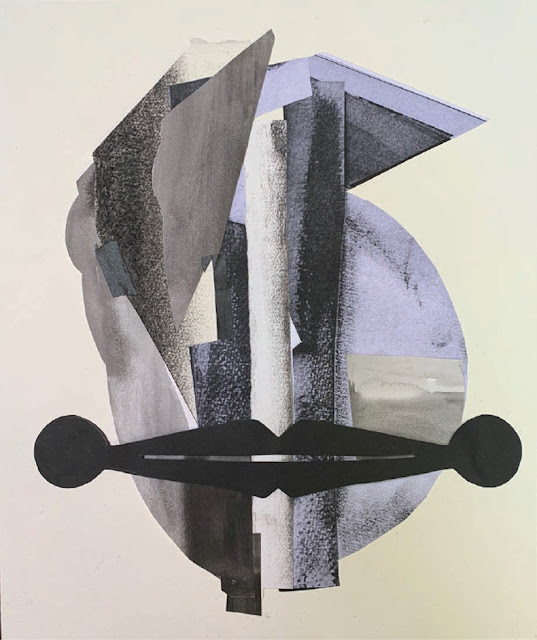 In the current show, Mask Drawing (2019) continues this acute stylisation of the face or mask. Collage elements carry no individual facial features in a simple rearrangement but rather stress a construction from more general forms, not so much a ruthless cutting-up of sources as a haphazard alignment that vaguely evokes a face, in turn worked over with paint. This process encapsulates much of Smart’s attitude toward depiction and women. The concern from very early in her career has been with a fleeting unity; of purpose to femininity, of recognition to representation. Both remain markedly provisional or conditional, a work in progress in every sense. The various configurations available to her wall assemblies underline this flexibility, its deliberate lack of resolution. Sundry extensions into textiles, costume, dance and video only reinforce the importance of the subject at the mercy of circumstance, the picture cut from disparate materials. While collage has become a common practice in art over the last century, its marriage to a theme of feminine identity and invitation to more expansive projects and collaboration is distinctive of the artist. 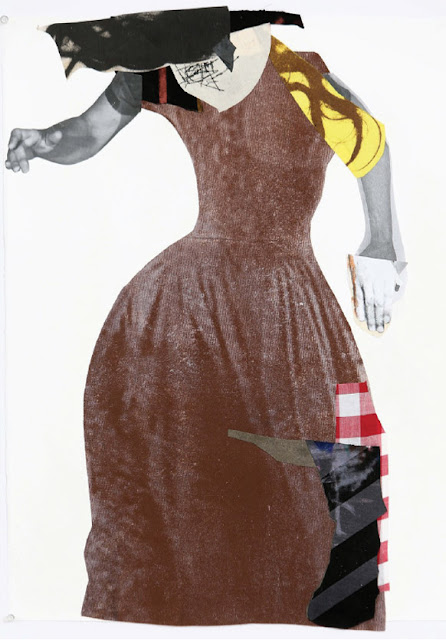 In recent years digital developments have enabled greater integration and sophistication to the collage process. In works such as Choreography Collage – Hand Movement (2013) photographic sources may now be printed digitally to fabric or paper, edited and tinted with far greater finesse. Significantly, this does not replace hand-cutting and placing, stitching or painting, but rather augments the options, gives the work added momentum, more versatility or transience.  The dance becomes between and across sources, a celebration of tasks evaded or abandoned, of fashions revisited and revised, of women as something more. 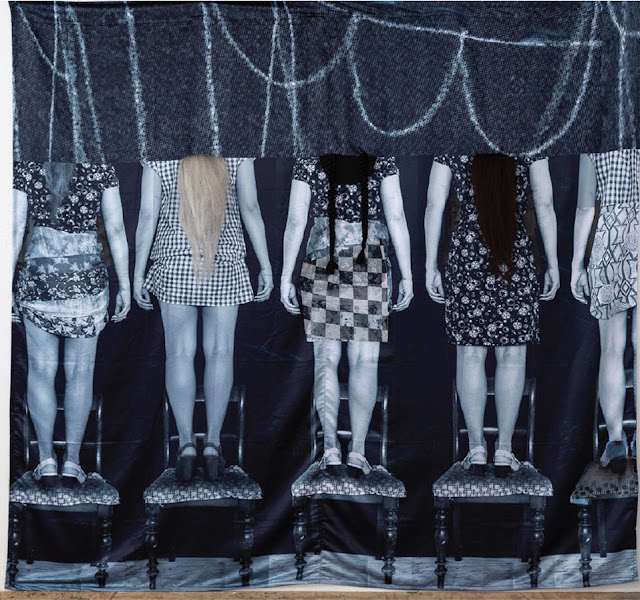 The largest work in the show is Assembly – Performance (2018-19) displayed with the three copies in separate rooms and different accompanying works. But in a larger space all three may be placed side by side as a kind of frieze, stressing a collective identity. The work is a good example of how digital options have shifted the emphasis in some ways, so that cutting or delineating elements is more varied, from the obvious division across the top, separating the enlarged drawing (in itself more easily accomplished and tinted through software) from the staged photograph of figures, to the stitching of the seam up the centre of the photograph, to the outline to legs and cushions through lighting and focus or software. Cutting thus becomes far more nuanced. The added hairpieces to the four main figures also adhere to the upper division and flag a growing interest in three-dimensional presentation, most fully demonstrated by the monumental public sculpture in the Docklands, Shadow Tree (2015). But in essence Assembly – Performance (2018-19) rehearses a chorus of dancers or puppets, their faces avoided, their legs a measure of hemlines as much as height or shape, their dresses a match of textiles and fashion. And, returning to an earlier observation, there is something teasingly prim about the arrangement. The chairs may be theatre props or simply aids to the dressmaker intent on fall and fit. Yet taken collectively, the ensemble becomes a performance, the looping lines across the top suggesting puppet strings, a grand plan. The contrast between nature and culture, interestingly, here shapes between realism and diagram. 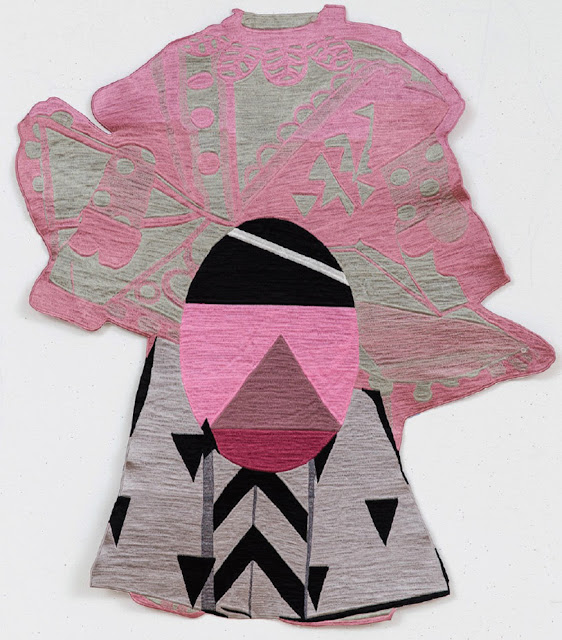 Assemblage – Costume (2015) 110 X 80 cm commissioned embroidery and mixed media
Another recent development has been a cross-cultural exchange with Indonesian artist Entang Wiharso, in turn furthering a longstanding interest in Wayand, Indonesian shadow puppetry, (a form of silhouettes) and leading to commissioned embroideries from an artisanal workshop there. These were incorporated into costumes designed by Smart that alternatively, may be worn in a performance, such as this year’s Violet Ballet, as part of the Adelaide Festival, or as a more full-bodied, not to say material collage, as in Assemblage – Costume (2015). 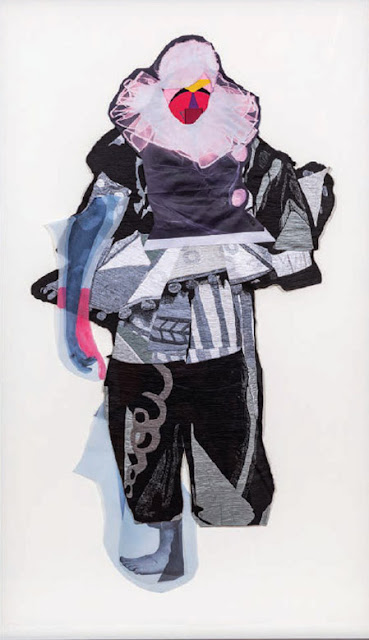 This growing interest in collaboration and versatility enables the artist to conceive of items of clothing as a form of collage or cutting to the figure, through actually designing costume. Cross-cultural exercises also draw the work into familiar critical concerns with globalism and post-colonial culture which are perhaps inevitable given this expansive project but somewhat obscure its true trajectory. As noted, Smart’s version of feminism is peculiar and probably better understood as a private quest for identity. Her career commenced as a painter, attempting to give the female figure some extra quality that finally paint alone could not supply. Her progression to large wall assemblies provides a pictorial structure once collage components are reduced to silhouettes and given only temporary or tenuous fixture. The work broaches installation, but Smart is not drawn to more three-dimensional construction there (in perhaps a Judy Pfaff-like direction) but rather into more colourful and photographic elements. 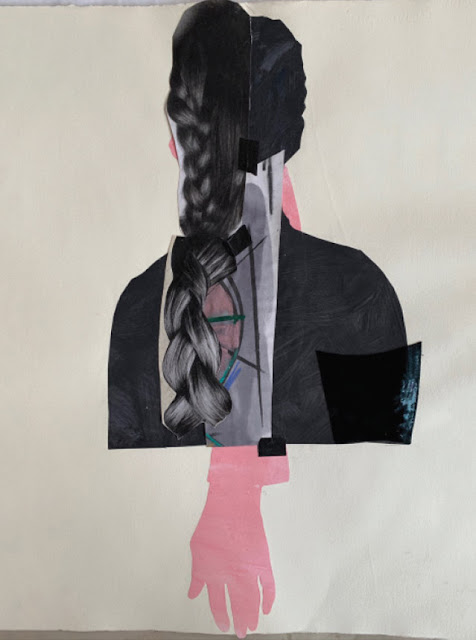 Her collages do not always result in wall assemblies, although often ascend to an impressive scale. Around 2011, digital editing and printing from photographic sources were adopted, granting greater volume and detail to parts. Smart is attracted to greater flexibility, but clearly does not always abandon more fixed arrangements. Flexibility, it seems, is weighed against more elaborate preparation and co-operation in some cases. All the same, wall assemblies and their variable configurations have become the artist’s signature and in this respect it is instructive to compare her practice with the American artist Kara Walker. Walker also arrived at site-specific wall assemblies in the mid-nineties, her content based upon Antebellum slave stereotypes and caricatures (not exclusively female). Smart’s assemblies by comparison are more abstract and circumspect, avoiding social stereotypes in just the way that Walker embraces them. Walker remains committed to a Black American identity and its savage history, adroitly echoed in silhouettes, or keeping figures in the dark - black in every sense. 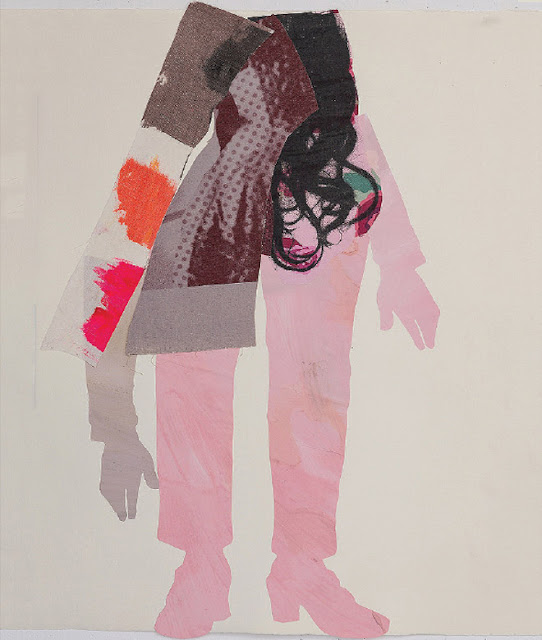 For Smart, silhouettes provide an essential ambiguity to her frameworks rather than a more loaded or racial meaning. Her figures generally adhere to conventional proportions, at times slavish in details to footwear, but are never exaggerated or caricatures, if anything brittle and exacting. While Walker is in a sense married to the equation of silhouette with American slavery, the work is then trapped in historical stereotypes. It cannot provide a more nuanced or contemporary view of racial identity. It remains, even for animation and sculptural extensions, a narrow project. Smart, in contrast never aims for that kind of cultural punch but instead toys with the iconography of pirates, insects, fashion and puppets in intriguing schemas. Smart has her historical side as well, with an allegiance to Modernist pioneers from the 1920s, the collage of Hannah Hoch and the theatrical costumes of the Ballet Russe, while pointedly ignoring more recent and popular exponents. Yet since Smart skirts broader social issues, the omission is hardly crippling, but rather points to some more personal address to a remote past, an era of breakaways. One project is narrow but potent, the other broad but diffuse. Neither is superior of course, but usefully indicates scope of silhouettes in wall assemblies. In passing, it is also worth noting Melbourne artist Irene Wellm has adopted wall assemblies following frustrations with painting, but with very different interests from Smart or Walker. 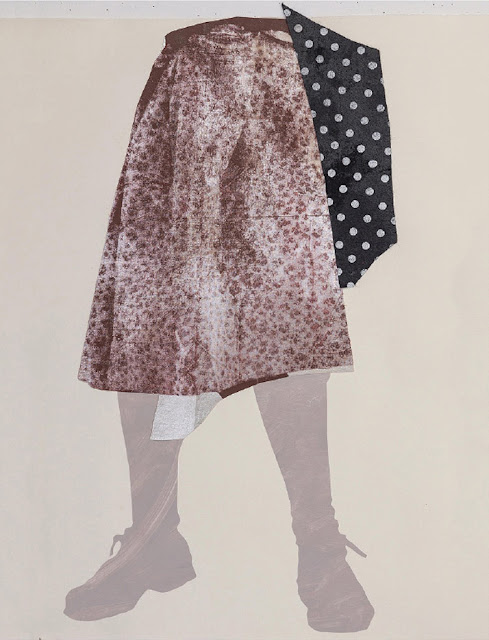 Finally, the present show demonstrates that Smart continues to return to pictorial concerns, not quite to painting or prints but in some more fixed form and hybrid of means, ingeniously reshuffled for temporal and tangential needs.