MICHAEL VALE - 'The Transit of Mercury' 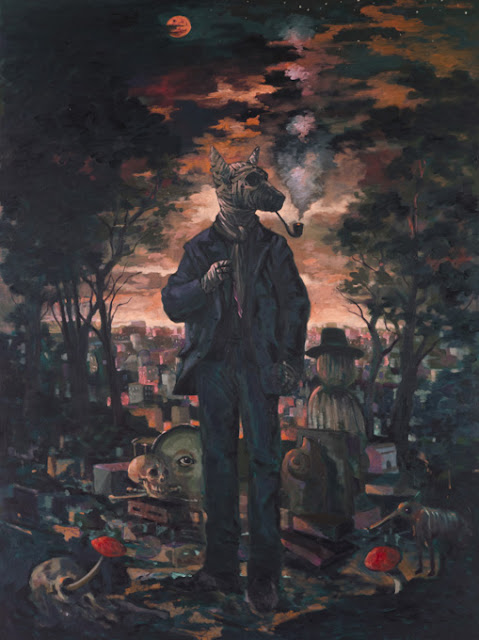 This is the artist’s first show with Anna Pappas Gallery, although he has been a popular presence on the Melbourne scene for some time, through involvement with artist-run and smaller exhibition spaces, teaching at Monash University, video production with partner Donna McRae and finalist in various art prizes. Vale is best known for his dark and brooding paintings featuring an anthropomorphic dog (possibly a Great Dane) smoking a pipe. The title of the current show takes up a celestial theme first flagged in 2011 with an exhibition at Five Walls titled The Conquest of Space. There, following Marcel Broodthaers, a utopian programme of space exploration is slyly bracketed with painting’s similar aspirations for abstraction and each treated as naive or at least an overly optimistic ambition for the twentieth century. The dog recalls an earlier era of illustration for children’s tales and is offered in the same spirit as extraterrestrials and mischievous cartoon spirits, essentially as myth preceding complex fact. In fact Vale has visited NASA, has a genuine interest in space exploration and the actual transit of Mercury occurred in May. But it is as much astrological as astronomical meaning that concerns him here, something the accompanying short video in the exhibition takes up.

Mercury is also the Roman god of communication and the sign of Mercury is characterised as a time of prompt and vigorous messages. However, in the paintings this amounts to not much more than clumsy pantomimes in the dark; a childish posturing in the face of remote alignments. While the messages are plainly silly, they nonetheless coincide with astronomy and it is this dual appeal to myth and science, to the comic and serious, high and low, traditional and popular culture that is central to the artist’s vision. Vale belongs to a generation that came of age artistically in the eighties and was drawn to Post Modernism as it exchanged the blunt symbolism of Neo-Expressionism for more diffuse reference, for pastiche and parody of pre-Modernist styles. Painting then looked to recycle its means, sometimes as a way to highlight contemporary photographic genres, sometimes to combine them into a new version of history painting. For Vale, the latter option proved more attractive.

Painting thus acquired a new and expansive ambit. In Australian painting, the use of children’s storybook characters in this way commences with Susan Norrie’s Fete (1986) where Mickey Mouse is dressed as a pierrot, set against a shifting, gestural background. Later, Stephen Bush’s The Lure of Paris (1992) uses Babar the Elephant against a romantic seascape as a Post Colonial lure for traditional painting. The concern is firstly with familiar, essentially benign figures given wider, unexpected significance through traditional painterly settings or treatments. Such iconic figures eventually allow more general or generic ones and by the time Vale settles on his smoking dog it is enough that the dog has become a genial anthropomorphic character and setting a smouldering wreckage of classicism. We have a flip painting of a decaying history or a history that gathers up painting’s dark sides in comic brio. Either way, tone is distinctly ambivalent, breadth of sources ruthlessly reduced. Whether we can still call this Post Modernism is moot. The project now steers iconography by more remote alignments, effectively navigates by the stars.

Yet Vale’s work remains light in mood and touch and even as works have grown larger in recent years, they remain reassuringly modest in scope. While grand themes are certainly afoot, he resists the big statement, the laboured allusion or fussy academicism. Indeed, the charm of the work lies in his offhand, brushy approach, his evident affection for childhood hokum and the casual tropes of illustration.  It comes as no surprise that the artist has a background in children’s television programmes as writer and designer. The paintings are relaxed, affectionate visions of painting’s reluctance to descend to the official version, received wisdom or the gospel truth. Instead they conjure dim connotation and mystery, dwell on mood and attitude and generally ham it up.  But while this constant deferral is amusing, it also starts to suggest evasion. There is an uneasy side to maintaining a child’s perspective or a wonderland for an adult. Matters of assigning a paternal or dignified character to a dog (or vice versa) for instance might also suggest difficulties with the role or pet, while attention to outward attributes at some point suggests less confidence in more central ones. Similarly, the lack of story to the pictures might suggest a way of preserving a role at the expense of its consequences. The characters remain ‘in the dark’ for their own good.

In this respect it is interesting that the artist has used the smoking dog in short movies in which mock historical tales are spun around him and where he functions as teasing surrogate for obscure pioneers. Parodies of James Ensor and Caravaggio are prominent - they are above all, art movies – essentially the smoking dog is inserted into art history, granted a distinguished heritage. Yet it is the absence of story that is key to Vale’s paintings. In contrast with the recurring character of the smoking dog, the artist has occasionally turned to portraits, and twice been a finalist in the Archibald Prize. Both Night of the Wolverine (2012) – a portrait of rock musicians Dave Graney and Clare Moore – and Warren Ellis (2013) a rock violinist, pose with their instruments and immediately invoke an absent realm of sound in painting. They too are situated in a traditional generic wilderness, all the more acute for being contemporary Australians. While the pictures retain the artist’s easygoing facture and sly tweaking of bodily proportions, the sense of isolation and silence is palpable. Interestingly, the musicians’ dress carries no distinct period either. They too could be from an earlier era. But they too are really mythic images in which the artist is careful to avoid the facts of context and lives. The settings stand for the moods and associations of their music, for the artist unbound, but it is telling that these fall into darkness, not just from deference to pictorial tradition but for something that is finally inadmissible to their identities for the artist and no laughing matter for Post Modern painting. Let’s call it authenticity. All this is just to indicate depths to the work, should one probe for them. 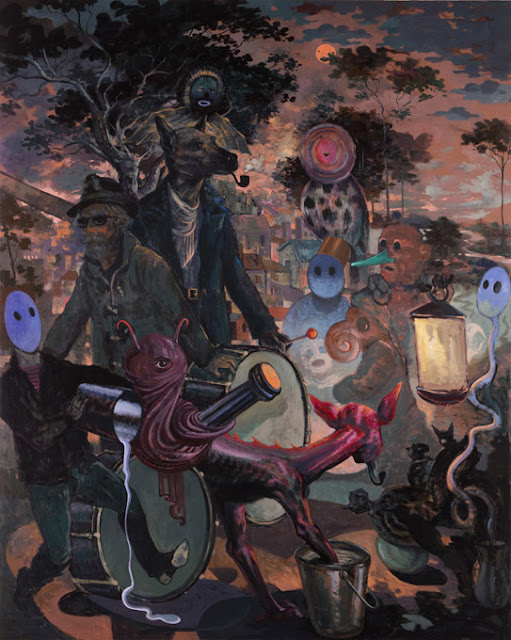 The present show offers no actual persons or portraits however. The cast of characters includes cartoon-like birds or beak masks, spy-like characters in dark glasses, mythic beasts and ghostly apparitions, part comic strip, part mask, part aliens, all blended with painterly panache. All are familiar from recent shows. In works such as the eponymous The Transit of Venus (2016) the mix and events recall Neo Rauch, albeit in idle, sketchy mood or mode, while elsewhere the frontal, staring figures are variously masked or stylised recalling Magritte at his most louche and occasionally villains from splatter movies. It is an appealing juncture. The retreat to stock types is part of a trend in recent years generally labelled the ‘Carnivalesque’, in part for the qualities of a street parade to figures, in part as refuge in popular stereotypes.  While this is distinct from anthropomorphizing animals, it is a segment of the artist’s range of figures. Here, it is not simply that the real person hides behind easy theatrical roles but that there is no real person without convenient roles to stand behind. In some cases the mask or role itself may be so stylised as to be irreconcilable with the rest of a picture. Is there Life on Pluto? (2016) is a good example. On the one hand, masked figures deny any more authentic identity, but at some point they are also denied it by their pictures. Candour is thwarted from within and without. It is a pictorial and a privacy dilemma that touches on very real issues today, particularly in an age of avatars, selfies and digital editing. 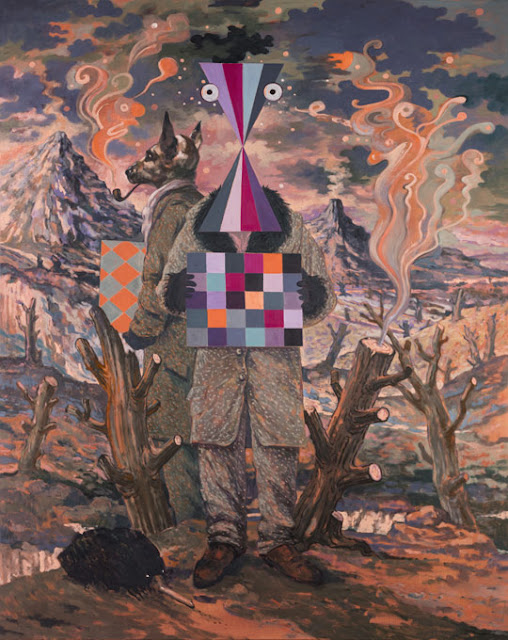 Vale’s paintings thus stretch the array of personifications to the point where personality becomes an abstraction, merely a body in transit or sign of the times. It is a game of course, not to be taken too seriously and hardly bears closer scrutiny. Perhaps that is why in Snow (2016) proceedings are veiled (pun) in multicoloured snowflakes, further concealing figures and announcing a chillier climate. Low visibility is the biggest disguise, for the omnipresent person. It is my favourite in the show. ALL IMAGES COURTESY OF THE ARTIST AND PAPPAS GALLERY

My thanks to both for help in preparing this review.