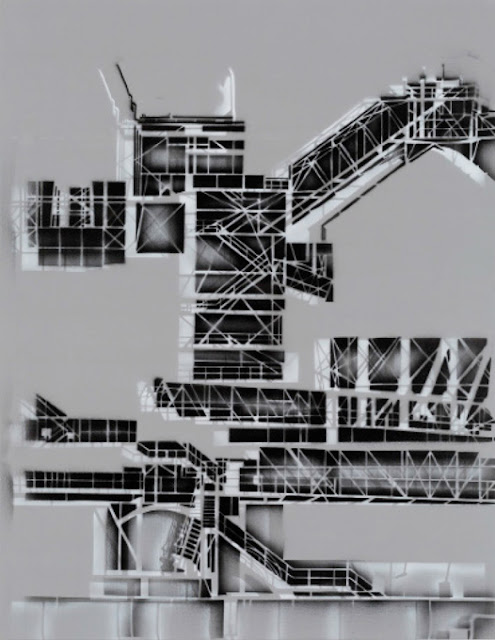 The show comprises seven works in various sizes displayed in the gallery’s main room; all acrylic on canvas with the exception of a work on paper. The gallery’s smaller room is devoted to the works of Will Cooke. The show’s title, ‘Zinc’ alludes to the Nyrstar Zinc Works in Hobart, a vast riverside complex now commonly observed on the ferry ride from the city to MONA, the city’s destination art museum. The factory serves as the source for the imagery used in the paintings. But it is really the isolation or perhaps distillation of the metal to the title that subtly evokes the artist’s characteristic process of using spray stencils, with their high contrast reductions of photographic sources refining the image into an icon of severe geometric construction. The show mines a rich seam on a number of levels.


A feature of the present work is the greater use of a ground upon which the image is arranged, decidedly flattening or abstracting perspective. The choice of a metallic grey obviously adds to the theme, but as with all of the artist’s work, distance is more a matter of detachment than a dogged attention to detail. The work dismantles tonal continuities in order to concentrate on underlying structures, exaggerates conventions inherited from photography and printing in order to reconsider their content and value. In so doing, the work grants painting a new reserve and subtlety. An air-brushed treatment of stencils becomes a discreet gesture to compliance, as naggingly diffident as a Jasper Johns’ stencil or Andy Warhol silkscreen, here amplified through the choice of common architectural imagery. Unfortunately this delicacy rarely survives reproduction and in the artist’s larger works can be distinctly misleading.
Excavation, at 150 X 357cm unquestionably the centrepiece of the show, is a case in point. It uses a mis-registering of black and white layers to the stencil (the white dropped perhaps two centimetres below the black) to create what looks at a distance (or in reproduction) like embossing and a slick or smooth use of mid-tones. In other words, it looks like perfectly respectable graphics, at a distance. It is only on closer inspection that the image floats free on gentle clouds of overspray, blurring and wavering consistency to lines and truly comes alive as a disembodied spectre.

While the ground creates new ambiguities amongst the architecture, it also accents basic geometries of line, grids and triangles that are as much a part of the twentieth century history of abstraction in painting. In this respect the work ‘excavates’ the foundations of say, Paul Klee or Constructivism while tracing the functionalism implicit in industrial architecture (indeed, commercial design). Excavation is a deceptively elegant audit of foundations.


This detached, contemplative approach has been at the core of the artist’s work for most of her career. It arose as a reaction against the Neo-Expressionism of the eighties during her studies at the VCA. Her interest in urban architecture was already in place, but toward the end of the decade she adopted aerial views, implicitly derived from photography and a more objective genre and a technique at pains to avoid standard facture and drawing. 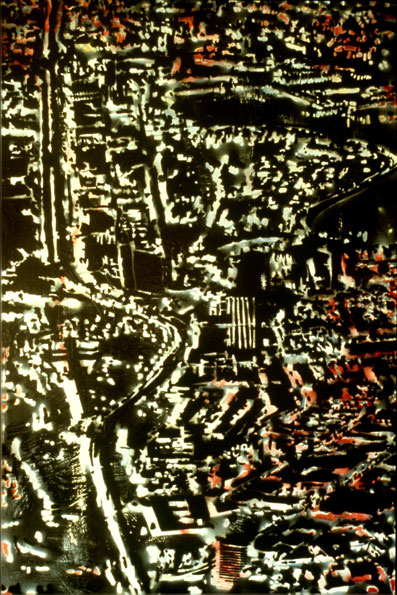 Precedents here might run to Pop Art, as indicated, but it is the debased, abstracted quality to a familiar Melbourne landmark that flags a new voice, less an expressive or ironic attachment than a retreat to process, a defusing of experience into stages or layers.  She then adopts simple spray stencils using card and spray-cans on a varied, colour ground in works such as Orange Building Site (1989) where stencil modules are varied in colour and placement, adding to the layered, diffuse image. 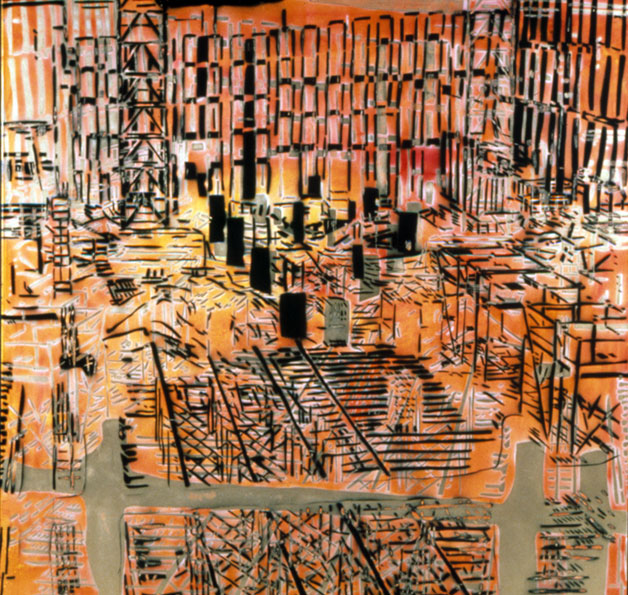 Other works from this time use a vertical view of the Eiffel Tower, which may be seen as looking up or down upon it, compounding the ambiguities in a deliberately photographic ingenuity, but effectively renders the landmark as a dense, overloaded asymmetry, a skewed, crystalline jewel. The choice of the Eiffel Tower also declares an artist not content with merely local content or tone contrast as stencil’s principal asset. Her work then experiments with a dark or coloured ground against which her sprayed edges to a stencil register as blends or gradations, but otherwise surrender a more recognisable image, as in Mesh (1995). 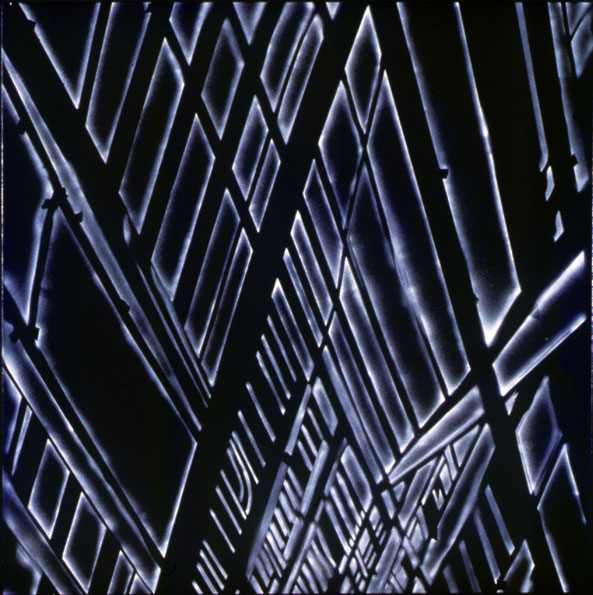 Forthun has occasionally explored other subjects, such as flowers, a cemetery and more abstract compositions, indeed more traditional print forms. But in general her focus remains on the urban panorama and the intricacies of stencil technique, of light over dark, loosely secured or sharply registered and modular assembly. A work such as Heat (2006) is a good example of the artist’s growing sophistication with what is generally considered a primitive or amateur form, increasingly the province of graffiti or street art. 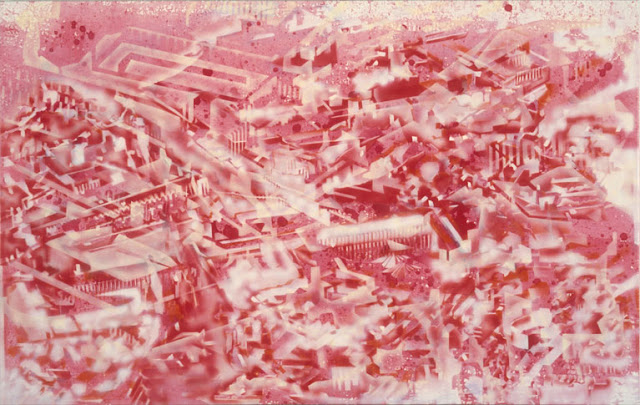 Here the aerial cityscape yields spatial coherence for something like a time-lapse busyness or blur of activities, yet is still in some way a street plan with buildings, lights and shadows. Forthun’s patience and planning carry what was initially a technique for quick and crude summary into unexpectedly subtle permutations and this growing command sees her switch to an air brush rather than the crude nozzles of spray-cans and greatly increase the subtlety of edges and blends.
The artist has refined her process in other ways, commissioning particular aerial photography of Melbourne and taking advantage of digital advances with the flow onto digital graphics in Photoshop. This enables not only higher quality source imagery but the means by which to convert them into high contrast of ‘tone dropout’ versions, greatly adding to the precision and detail at her disposal. The Photoshop file is then printed onto a large polypropylene sheet which the artists divides into modules and removes shapes with a scalpel. The process thus retains the artist’s hand, in decisions over which shapes or tones are to be discarded, but offers not only a more durable plastic stencil but a greater range of edges or outlines.
Works over the past decade thus feature far finer lines than had hitherto been evident, as in Love Story (2011) where an aerial image is exchanged for an eye-level perspective on an old steel bridge (based on the Story Bridge in Brisbane). Here the painting no longer derives from a distinctly photographic perspective but rather assembles silhouetted modules, by dark or light, with fine detail in intricate layers, pacing digital graphics somewhat. 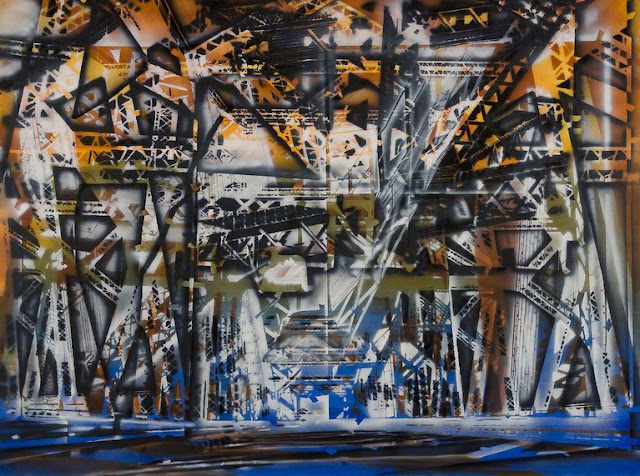 Her 2013 show at Blockprojects ‘Room 131’ offered a surprising departure in subject matter and style, taking a museum display case at the Victoria and Albert Museum as another kind of distant contemplation and concentrating on rendering glass transparency and reflectance. A work such as Soda Siphon and Glassware (2013) arrives at something closer to a wood or linocut in its treatment and interestingly dispenses with layers and modules for a more straightforward picture plane. The work is interesting in extending the range of subject matter and theme but so far remains an isolated foray into more complex surfaces for objects. These works do not suggest digital graphics but may yet pave the way for other Photoshop refinements. 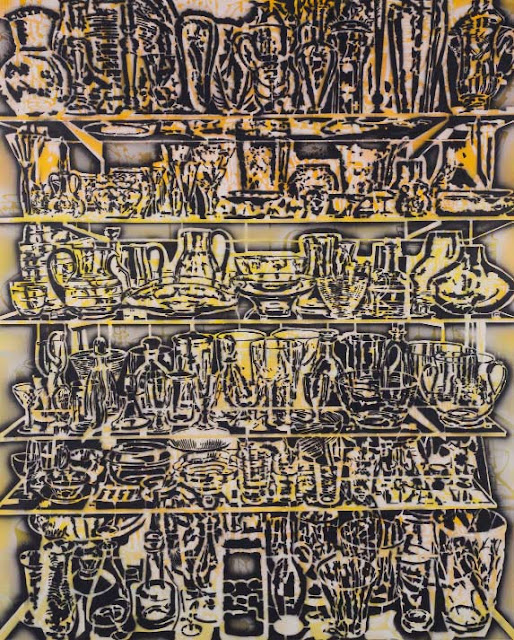 Returning to’ Zinc’, smaller works such as Airy Stares (2018) feature some of the layering of earlier work but in general the show plays off black and white treatments of the stencil in continuity and counterpoint as in Double Zinc (2018) 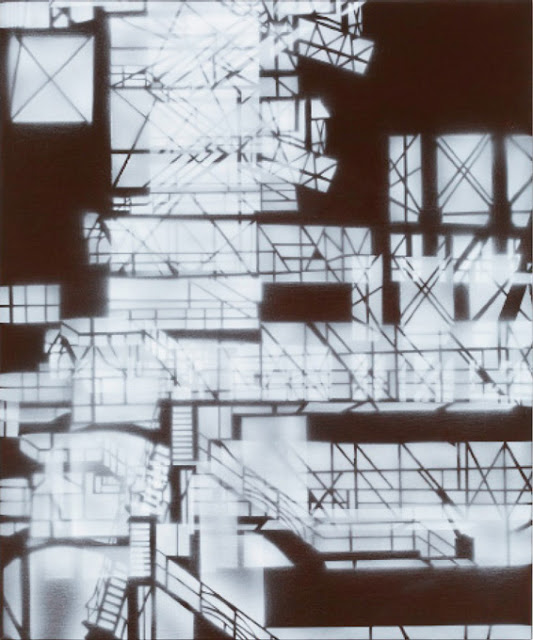 Here the frontality of the image again rehearses various lessons in traditional design and abstraction. 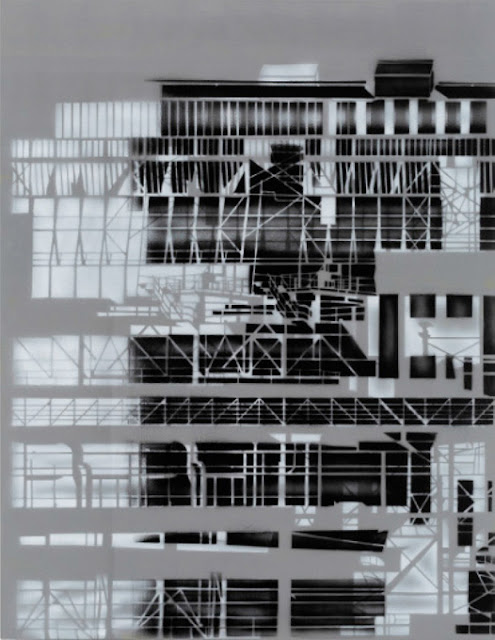 The show is not the first time the artist has used the Zinc Works as subject matter. In 2016, working in collaboration with printer Stewart Russell, she produced several works based on the plant, one of which was a finalist in the Glover Prize in Hobart of that year. But typically, the process is a slow one, from initial snaps taken on her phone while on the ferry to NOMA to higher resolution photography developing those sketches and then further processing in Photoshop. The artist proceeds in careful stages with considerations that continue to carry her stencils into original and intriguing refinements.

ALL IMAGES COURTESY OF THE ARTIST AND BLOCKPROJECTS

My thanks to both for assistance in preparing this review.