Nicholas Thompson Gallery, 29th April – 21st May 2017
The artist is a distinguished figure in Australian painting, noted for absorbing the colour fields and stripes of New York Minimalism in the seventies, while retaining links with the more freewheeling abstraction of Tony Tuckson, Michael Johnson and John Olsen, under whom he studied at the East Sydney Technical College in the early sixties. The work often maintains an implicit landscape orientation, further aligning it with local tradition, while an abiding love of waterways and sailing strongly suggest the harbour world of Sydney. It is this extending of tradition, absorbing overseas influences and redirecting them to more local and personal ends that continues to hold our attention. The current show cannot be properly appreciated without some indication of these developments.

Firth-Smith is also an inveterate traveller and collector of all manner of curios and materials and these activities are reflected in underlying themes to the work. At a formal level, the work oscillates between a marked accommodation or collection of elements within a literal framework, their relations as mere two-dimensional measurement and colour, while on the other hand, emphasising an austere exclusion, a purity to the relation, a self-sufficient identity. One denotes the detached traveller, the other the compulsive collector. There is a psychological dimension to this disengagement, indeed its balance or compensation in collecting or assembling, should one care to delve more deeply. But usually and more directly, this dynamic is tracked as gradual concessions to figuration from the mid seventies and greater awareness of metaphor and expression throughout later work. By the mid eighties, the work looks closer to Neo-Expressionism than Minimalism and by the turn of the century attains a baroque, Post Modernist breadth. These changes bring distinct undertones. Where the Minimalist work sings of colour harmonies and complementaries and revels in a brushy aplomb, work from the eighties is notably more dense and tense, as the sweeping lines, squeezed directly from a paint tube attain a surprisingly adamant tone in contrast with vigorously gouged or combed backgrounds. The work declares a heaviness to gesture. There is also a strictness or precision in the use of circles and ellipses, often a darkness or greyness to palette. The combination suggests that the balance of opposing impulses at that point came at some cost.

Later work diversifies, venturing into literary allusion (such as Salome 2001) still lives of banjos and lamps, deeper space and horizons to seascapes (such as Long Reef 2009). There have always been experiments, but this growing versatility brings a more relaxed and confident mood. Rich colour eventually returns. There are still works that zealously guard their self-reference or remain completely abstract, but here the distinction between ground and element becomes far less clear, as more vigorous technique erodes the distinction

We now have something closer to Abstract Expressionism, where the sense is of an immersion in process and the slipperiness of either accommodation or identity; form or content. But the breadth of interests by this stage relieves such equations of some of their primacy or urgency. Such works acquire a lush fluency, a greater variety of means or technique, a greater awareness of tools. Firth-Smith’s contribution here may be less conspicuous than in earlier phases but continues to gently refine local considerations, for gesture or facture and a range of emblems or metaphors available.

More recently, the artist has turned to the remains of long abandoned house foundations and casual archaeology for inspiration, features discovered around Hill End in Western NSW, where he now lives. His first show of these at the King Street Gallery in Sydney in 2016 was considered one of the highlights of the exhibition year by SMH critic John McDonald. The current show at Nicholas Thompson covers similar territory and the initial impression is of how light the paintings are, in palette, facture and mood, how loose or casual the line in figuration. The artist now even admits a figure – a woman in a black bathing suit – together with garden tools, sundry trophies, talismans and rusted relics. Water is still present, and the artist still plots his picture plane like a floor plan, or in strict two-dimensionality. But rather than wrestle with issues of depth or scale, accommodation here is more a matter of an assembly of panels as suites, diptychs or triptychs. 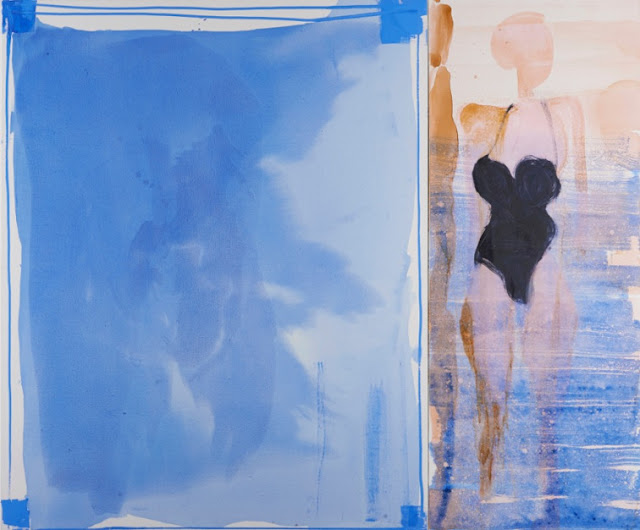 In Salt Water Salt Air (2016) the elements of water and figure are granted separate panels, not because the figure is not bathing, but because the painting is intent upon the entire volume of the pool, as a sheer area of swirling blue, as well as the figure and its displacements and motions. In fact one cannot resist looking for some trace of the figure in the empty pool, as some kind of resolution, such is the novelty of the arrangement and compelling execution. This picture alone makes the show worth visiting.

Other objects pictured are often encrusted or distressed and the painting furthers this identity with spatters, drips and washes over them, adding its own weathering and history. Even the term ‘washes’ deftly fuses nautical imagery with bathing and painting technique. The paintings thus forge a formal integration as much as an accommodation (and the use of housing foundations is hardly coincidental with this term). The work makes rooms for the artist’s world with a cleaner, lighter touch. Little wonder that brooms figure amongst the tools, or that their backgrounds comprise broad ‘sweeps’ of colour, as if applied with a broom. 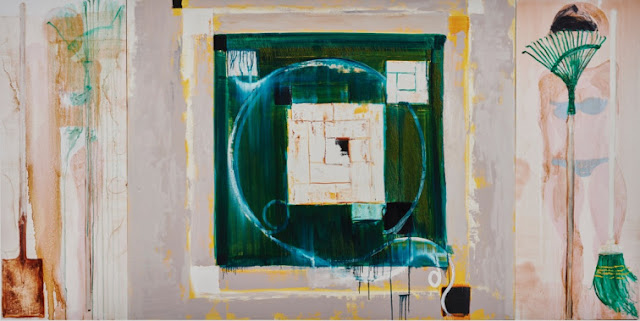 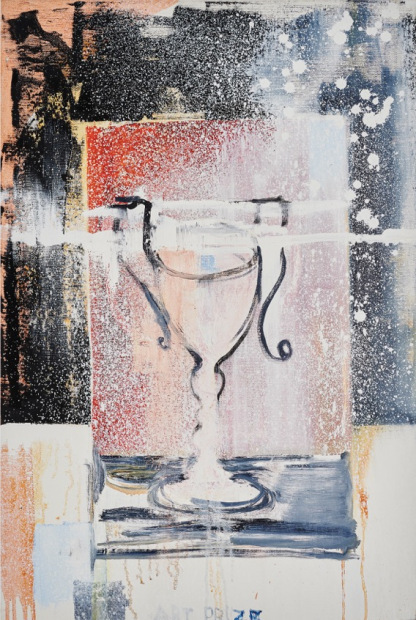 The trophies certainly add to this sense of achievement or reward and with the curving flourish to handles perhaps suggest that they too share a spiralling arc, in which at some point they might stand for a person. But it is the series of small pictures based on rusted farm equipment and fittings titled Rural Rust (2015) that suggest not just retrieval but transformation, not merely an array of long discarded tools, but elements in their own little landscapes of locks and hinges, horseshoes and screws, all personifying forgotten lives and places. 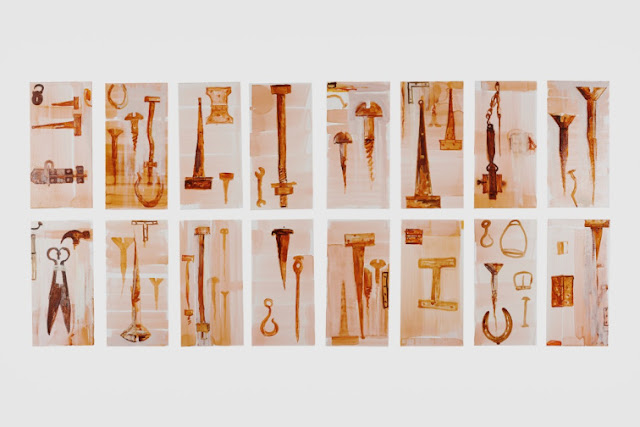 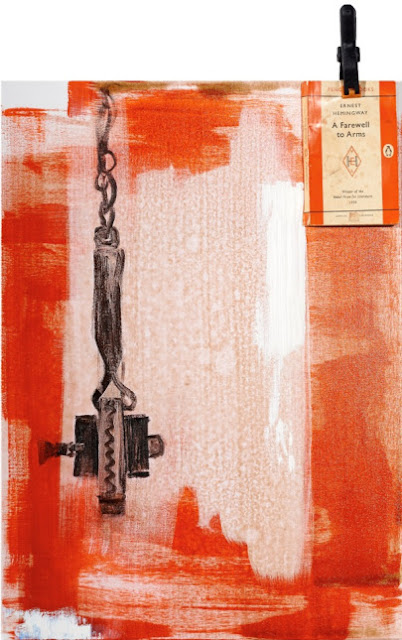 But while Firth-Smith is certainly alive to the pictorial potential in his subjects, one suspects he is reluctant to be too tidy with meaning, too ambitious or clever. In Trap (2015) a vintage copy of the Penguin paperback, Farewell to Arms by Ernest Hemingway is clamped to the upper right corner, more or less as a ‘lure’ to some arch, literary interpretation for the battered rabbit trap depicted in the upper left, or perhaps conversely, and a little controversially, to urge the novel as some kind of rabbit trap. The orange to the margins of the book cover perfectly match the broad margin to the painting so that formally, the book presents an elegant counterpoint to the dangling rabbit trap, one projects into the painting, the other out. One invites more remote reference, the other more direct or literal reference. So what do we make of the relic, even if we recognise it as a rabbit trap?  The painting strips it of all context and places it on a pale ground framed in orange, just as the book cover presents the title of the novel (a wartime romance) and while the trap undoubtedly has a tale to tell, plainly that is not foremost in the painting. Rather, it is its appearance as simply an isolated relic, as detached and abstract as the surrounding strokes and scrapings of orange and white. In short, the bait is really figuration and the target forthright painting. The novel looms as a side menu really, a reminder that a world and wider meaning lie just outside the picture plane. In this respect the clamp holding the book functions as another kind of trap, (indeed the title Farewell to Arms, may hold sober warning for rabbits). It is a modest and surprisingly rich addition to the theme of Full Circle, but here too the artist returns to first principles with renewed conviction and surveys the damage.


The Australian landscape tradition has long since splintered into indigenous tribal traditions and more urban concerns and ‘common ground’ seems harder to come by than ever. But an awareness of history, of revision and retrieval on even the most modest scale, within one’s own career or across the priorities of painting, are useful steps to maintaining a consensus. Firth-Smith continues to demonstrate that much.

All images courtesy of the artist, Nicholas Thompson Gallery, Melbourne and King Street Gallery, Sydney. My gratitude to all for assistance in preparing this review.

An interview with James Gleeson for NGA in 1979
The Roslyn Oxley Gallery, while no longer representing the artist , continues to display an excellent selection of his works on their website.