The artist has been a quiet fixture on the Melbourne art scene for around fifty years, can boast of regular reviews dating back to 1971, a solid following among major private and corporate collections, yet is curiously absent from public collections, national prizes and the elaborate apparatus of grants, scholarships, residencies and broad surveys that generally propel a career today. In standard accounts the work is seen as Romantic for the lush handling of darkened, turbulent scenes of leisure, prestige and seduction, these in distinctive loose but compelling arrangements. In his seventy-fifth year, the artist is perhaps due a more nuanced reading and the current show at Australian Galleries provides a perfect platform.

The artist is based at Cape Schanck, on the southern coast of Mornington Peninsula and the surrounding landscape is often a subject as well as setting for his scenes with figures. It is a recognised area of exceptional natural beauty, with large national parks, extensive vineyards and wineries and a popular tourist destination, particularly in the summer months. There is a challenge therefore for the artist in just transcending the clichés of marketing, and while a transient population is somewhat captured in festive activities, Anderson’s depictions are intent upon a more selective sense of place. They are views that are both veiled by a sweeping painterly treatment and made more alluring by it. The artist makes his own place from conspicuously shifting skies, dappled shadows and juggled perspectives. The place is firstly in a state of flux, not so much as a matter of season but as precarious occasion; a fleeting moment where he can place himself. Dusk on The Road (2020) 152 X 122 cm oil on canvas
In other words, we are in a very private world, one riding on the back of a very public one. Throughout the past thirty years at least it has been one peopled largely by partygoers in formal attire, giving way to some fairly raunchy courting in dark, furtive encounters that suggest at times an unlikely meeting of John Constable with John Updike. 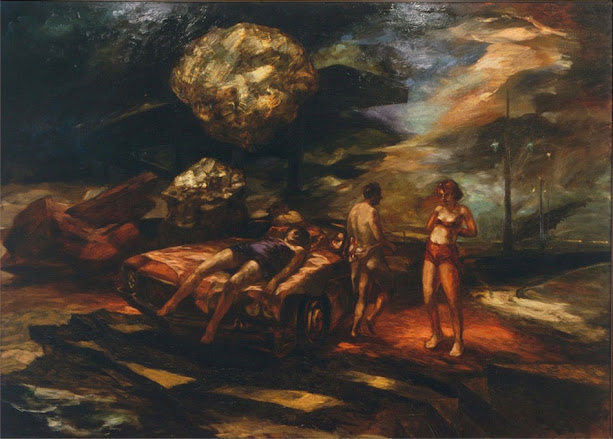 Highway (1997-9) 200 X 280 cm oil on canvas [NOT IN SHOW]
In common with many artists of his generation, Anderson’s training initially directed him along abstract, Greenbergian lines, but dissatisfied with formal constraints by the eighties, he ventured into figuration interested in fragmentary narrative, an accommodating picture plane and a more improvised approach to composition. Interestingly, Neo-Expressionism held no interest for him and in lieu of adequate training he immersed himself in Baroque and Romantic painting, adding later figures favouring broad treatment, such as Edouard Manet and Edward Hopper. The work flaunts the full range of traditional painting technique, from glazes to impasto but resists pastiche or parody, resists a more conventional Post Modernism, instead pursues contemporary, personal ends. 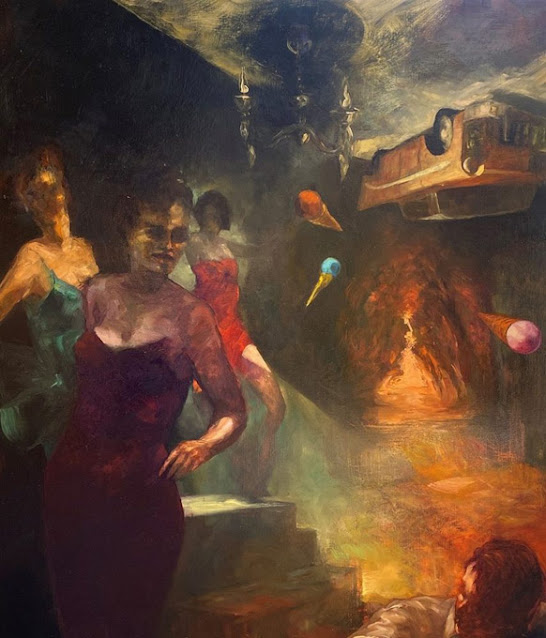 Subsequent development has been along roughly four lines. Firstly undressed couples have gradually been exchanged for a greater attention to bodies of water, from swimming pools to rivers or dams as well as the beach, all offering suggestive immersion to figures and a ready Freudian symbol. Secondly the state of flux has gradually amplified to include floating or flying elements, toppling or falling arrangements, adding to the instability of place, at times perhaps suggesting the layout of advertising or movie posters, particularly in the use of signage or text. Thirdly, the work has acquired a distinctly nostalgic or period quality, in the makes of luxury cars from the sixties, motorcycles, furniture and decor from the same era and to some extent costume. Where once the work stressed a privileged and possibly decadent lifestyle this has now become a more distanced, retrospective prospect. Finally the work has grown lighter in tone – literally brighter and richer in hue – making a decidedly cleaner, rosier vision. 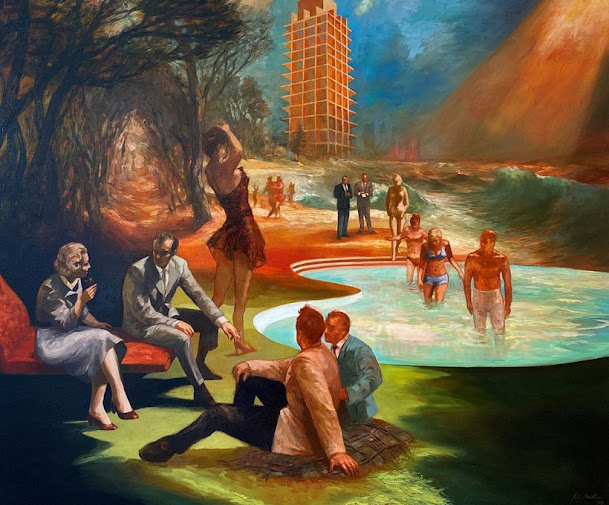 Rendezvous (2019) 152 X 182.5 cm oil on canvas
All four traits are in evidence in the current show of seventeen mostly large oils on canvas. The standout is surely Rendezvous in which a typical gathering of young men and women lounge by a pool. The very young and elderly find no place in this world, nor do domestic or workplace activities. It is a world firstly of leisure and amusement. It is also an encounter between the sexes, a preliminary sizing up or posturing that occurs against a background of shifting planes and brilliant hues that announce a fleeting grasp of a cherished moment or role for all concerned. Granted, it is not a particularly novel or sophisticated insight, but it is one with considerable pedigree, stretching back at least to The Judgement of Paris. And it is one to which the artist is able to bring an unexpectedly timely and localised aspect. The artist sees the place through this ritual, sees the ritual imbued with place.

Note also the procession of bathers that no more than ‘wade’ a little wearily at this point. In Blueprint, we have an older man intent upon plans, a 'blueprint' of a female nude, to judge from the upper portion visible, his old Jaguar (an XK 120) missing headlights and with a rear wheel discarded far left of frame, brought to an abrupt dead end, indifferent to the fleeting attractions of place, the attentions of others. The precariousness of the situation is further emphasised by the mysteriously toppling tableware in the foreground, the result of a drastically rising tide perhaps. Here again, the picture displays a deliberately cryptic structure in order to capture something about sexual opportunity at its loosest. The characteristic dappled passageway beneath local Teatree on the left delivers the figures to a situation that has no real future or plan, that now remains merely a distraction.

There is a subtly melancholic undertone to much of the recent work. Time (2021) 122 X 152 cm oil on canvas
Time is a good example of the increasingly nostalgic element to the work. We have a Jacobsen ‘Egg’ chair (1959) before a painting of a vintage motorcycle (possibly a BSA or Norton) and while it does not mean the scene takes place in say, the early sixties, the prominence given these objects now rivals revellers. They function now more as trophies to a past lifestyle. 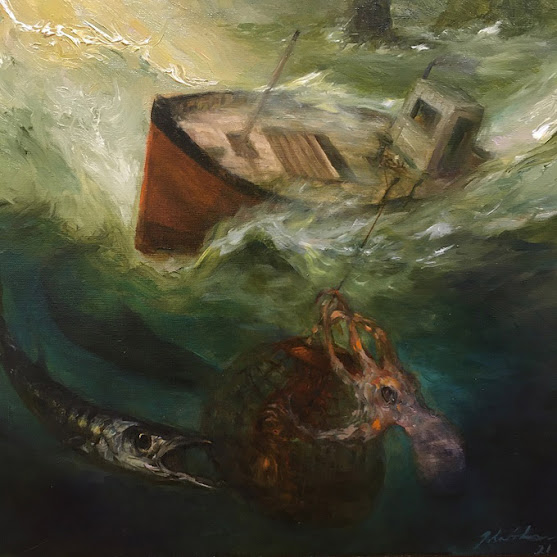 The show also contains the small work Catch – a dramatic study that draws upon the artist’s experience working on a local crayfish trawler. Such works have been occasional departures to his oeuvre for some time, are usually a variation on a trophy or ‘the one that got away’. In the context of the rest of his work, they offer a heavy metaphor for more romantic activities. Again, Anderson is less concerned with workplace routine than the excitement of high seas, unpredictable catches and the whims of weather - implicitly with a symbolic value. 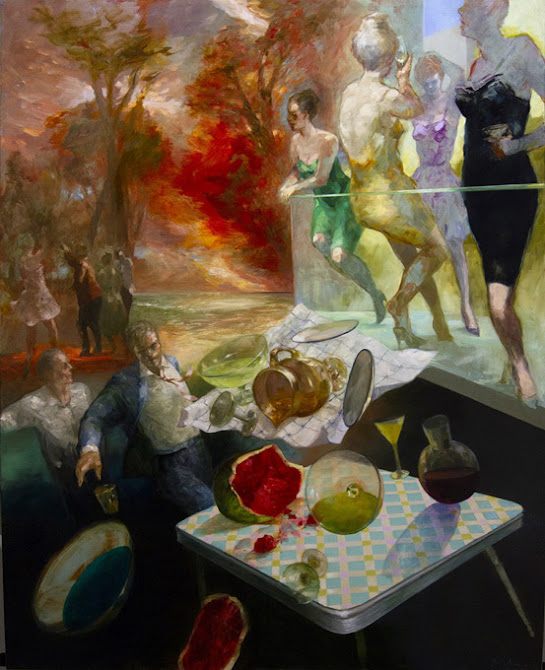 Dazzle (2021) 152 X 122 cm oil on canvas
Dazzle features a figure (possibly a self portrait) clumsily upsetting another table of refreshments, setting in play another moment to briefly regard tempting ladies upon a balcony. The elevated, symbolic level to the occasion underlined by the brilliant scarlet background. The moment has become a kind of deliberate conjuring act, a world falling apart, and it is a moment that will end in embarrassment.

As a genre, such figure compositions most directly derive from advertising and movies, something Anderson’s looser drawing and brushwork are understandably at pains to distance, just as actual locations proceed under heavy disguise. Then again, Anderson is not particularly drawn to the cinema, has difficulty sitting for long periods and would much rather remain active. But, as with his use of signs and logos (not in evidence in the present show) there nevertheless remains a distant affiliation to Pop Art, indeed to Post Modernism. However it is one curators evidently feel is not sufficiently compelling. Regrettably, wider recognition for the artist still awaits.

In his favour, one might cite the work of American painter Eric Fischl (b.1948) initially keen to exploit similar sexual mores of the leisure class, in his case, mostly located in comfortable suburbia. Then there is the precedent of British painter Michael Andrews (1928-95) whose triptych All Night Long (1963-4) is in the collection of The National Gallery of Victoria and uses the title of a contemporary British movie and figures derived from Federico Fellini’s celebrated feature, La Dolce Vita. Both examples reinforce the central theme to Anderson’s work. While the artist was not particularly aware of the work, he does recall an art school enthusiasm for the approach, and interestingly, other local artists of roughly the same generation, such as Peter Neilson (b.1944) and Gareth Sansom (b.1939) also attest to the influence of All Night Long. All of this is only to argue for a wider significance to Anderson’s work, a broader, richer context. For many though, it will hardly matter, the romance to the work is both abundantly evident and enduring.

ALL IMAGES COURTESY OF THE ARTIST AND AUSTRALIAN GALLERIES

My thanks to both for assistance in preparing this review.