IRENE WELLM- ‘Devils I Have Known’


As usual, Tacit Galleries presents a warren of sub-divided spaces, each devoted to a single artist under a tacit sub-letting arrangement. By necessity, works are mainly small and while astutely arranged to highlight affinities, the effect is nevertheless a bit like a mini arts precinct or fair, with up to eleven ardent voices vying for attention from all corners. The last time Melbourne Art Seen visited the galleries was in 2016, at its former address in Johnson Street, Abbotsford, when the dark Minimalist abstractions of T. J. Bateson blind-sided the reviewer, while seeking the work of Irene Wellm. This year no such distractions arise, with all due respect to fellow exhibitors, Linda Pickering, Myunghee Kim, Peter Summers, Mel Kerr, Eugen von Nagy, Ruth McIntosh, Brenda Walsh, Peter Ward, John Rabling and Katherine Westfold. Although Wellm’s space is much smaller this time, the work continues its striking use of a wall assembly of large black and white gouaches of mythic figures and props, effectively a site specific installation of cut-outs. 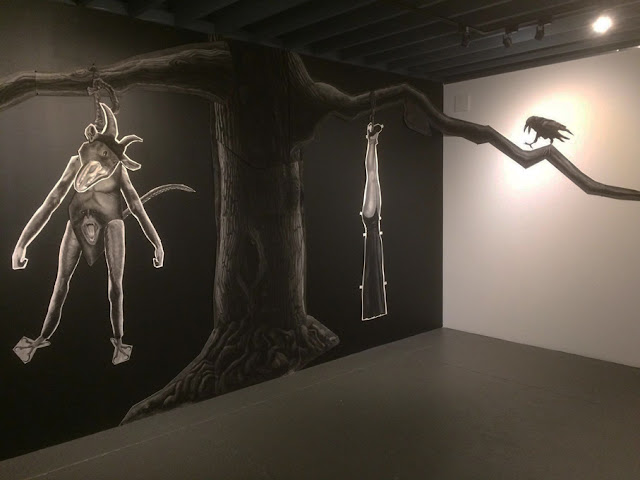 For some time, the artist’s work has dealt in surreal fantasies, involving childhood, make believe and role playing, often animals as magical symbols.  Following a Masters degree from the VCA in 2001 Wellm quickly gained recognition as an emerging artist, very much in step with overseas developments such as The New Leipzig School, with its revived form of history painting fuelled by obscure narrative and a more detached, Pop sensibility. Two Australia Council grants for a residency at the noted Spinnerei studios in Leipzig (2012 and 2014) seemed to promise a perfect match, but it was only when in close proximity to key exponents of The School, that Wellm realised the need for a more focussed, austere approach.

The work up until that point had mainly been large oil paintings, which brought with them various formal and technical issues that she felt were becoming a distraction. A work like Forging The Mandolin (2012) sees the artist with many of her motifs in place, but seeking ways to provide a more elaborate setting without being caught up in too much detail. The result is curiously muted, ultimately lacks conviction, pictorially. 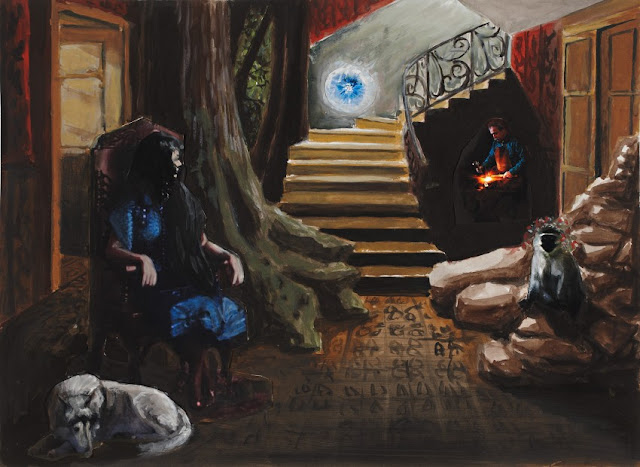 At some point in 2013 the compromises no longer seemed worth the effort and sustained settings themselves were more or less jettisoned. Similarly, the work while in Leipzig discards colour, initially to further narrow rendering options but actually enhancing volumetric or tonal qualities, granting isolated objects or fragments far greater realism. The change was not quite abrupt, but the pictures gradually favour a far more fragmented construction, deliberately betray photo-collage sources. The most striking feature is the introduction of conspicuous borders and tabs to parts, alerting us not just to a collage construction, but to a kind of children’s game of cladding and manoeuvring storybook characters. 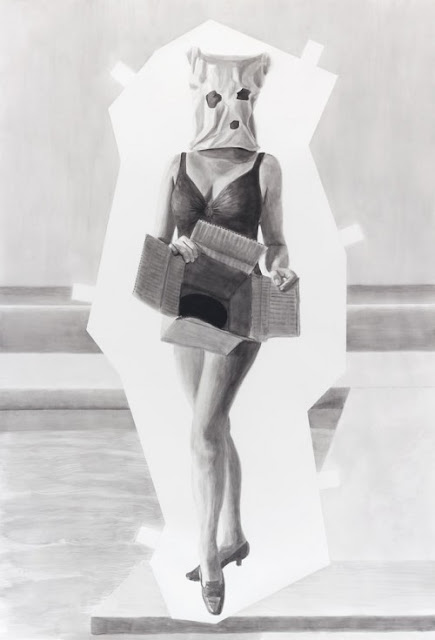 Empty Promises (2013) simply isolates a figure against a background but soon Wellm uses the devices to underline a more disparate assembly, as in She Gathers Under Her Shadow (2014). 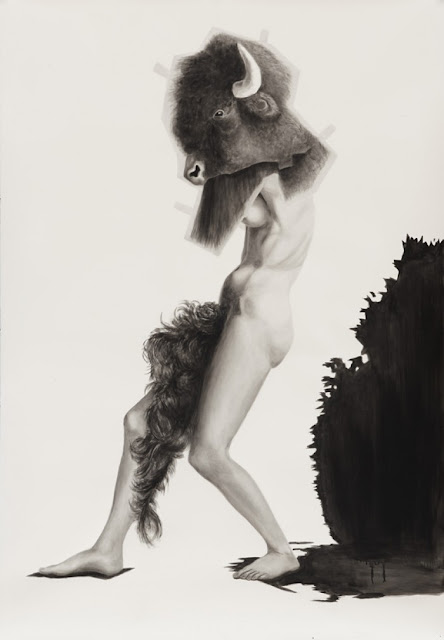 Here the game is not just one of sexual identity but a play upon nature, upon the bestial and cultivated, upon pictures and illusions. While the artist’s devices prompt the playful, the precision to her drawing reminds us that the content nevertheless carries a certain weight, has roots in the real world and tradition. We do not arrive at merely a mythic character such as a centaur or Shadow The Hedgehog (to take a more contemporary example), by parts, but rather at the underlying equation between person and beast, a role or costume and the person within and without it. This is novel, quite curious territory, since a degree of stylisation is usually involved to flag a more symbolic function. A more stylised treatment is something the artist experimented with in 2009, in works such as Something Like Us (2009) simplifying and flattening shapes. 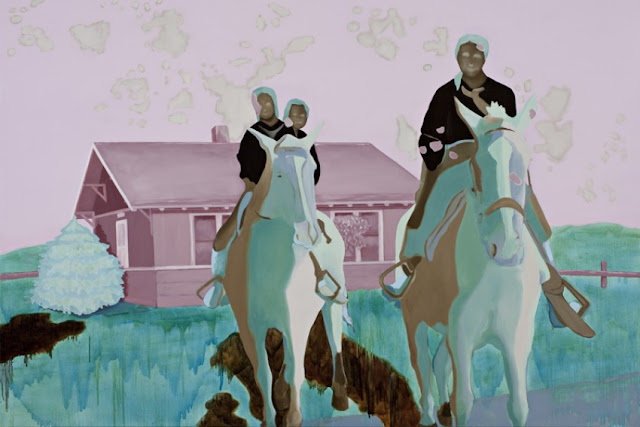 But this too ultimately lacked traction; needed more focus. A more effective solution awaited more drastic refinements. In recent work blunt fragmentation or collage generates enough realism for a metaphor, enough of a metaphor for grasp of the world. The two things hold one another in check, so that the borders and tabs signal a metaphorical realm yet invite careful attention to volume and surface within them. In effect, we have a world of close-ups.

In abandoning elaborate and sustained settings, the artist thus finds a far more compelling structure for her themes. As noted, these have been present throughout most of her career, but are now distilled into links or chains of fragments that all but eliminate backgrounds. A further, striking development of this structure has been the adoption of wall assemblies – detaching the figures and related objects from a support and arranging them across an exhibition wall. Precedents include the work of Sally Smart and more recently Kara Walker, but Wellm’s distinction is in the brute juxtaposition of pictorial elements, heightened by configurations upon the wall. What counts in her case is really how the parts reinforce one another, without quite becoming a whole, extend a network of associations outward, much as the branches to the large tree in Devils I Have Known snake around abutting walls. 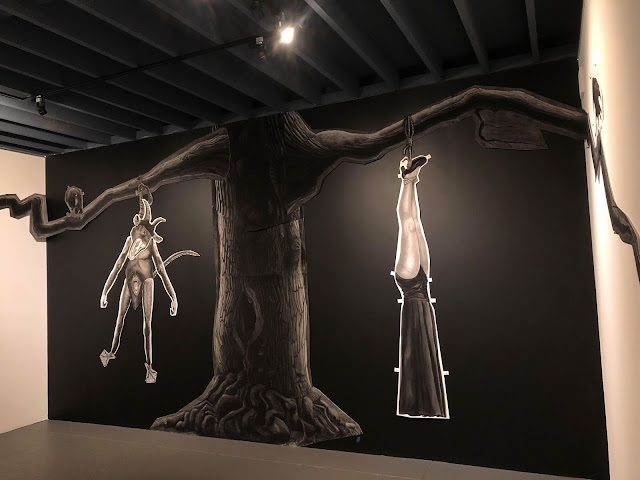 A wall assembly also allows the artist an all encompassing scale, surrounding the spectator and drawing them into a private world and thus making the pictorial space literal or actual. This too meets a long standing ambition for the artist. The current show consists of just two works, the wall assembly, Devils I have Known, sprawling around three walls, as noted, and on the fourth wall, Moksha (2018) 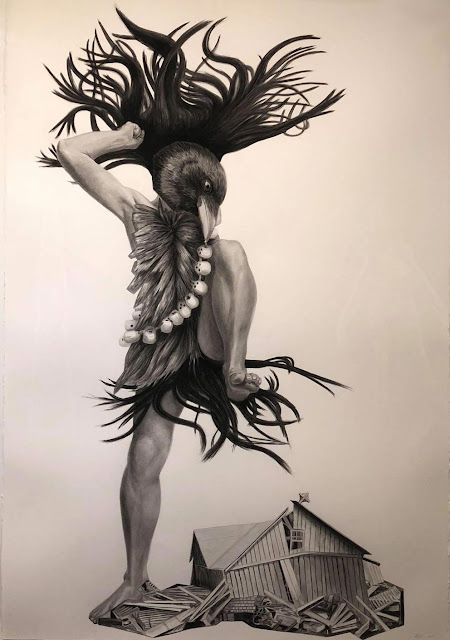 The title derives from an Eastern spiritual term for liberation or release but is here given a furious destructive interpretation. One might suppose it represents freedom from domestic duties or some more fixed existence perhaps but the giant pounding bird/person also represents a savage regression in the circumstances, the price to be paid for such liberation. While the artist regularly appeals to the natural world (although notably not Australian instances) for states of instinctive disposition, for notions of balance and support, the work also reminds us that these come in small or circumscribed portions and that beyond them lies, if not a vacuum then indifference. 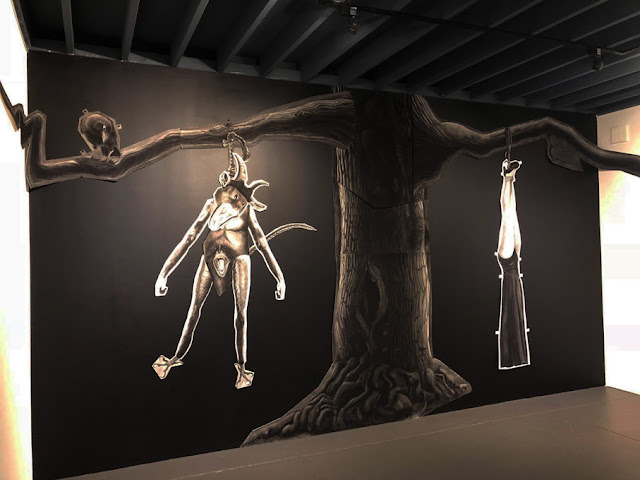 The title Devils I Have Known also invokes the notion of evil and for the artist these are seemingly bound up with themes of bodily identity and sexuality. A feminist art critic would have much more to say about these, here it will suffice to note that parts often stress multiple and conflicting roles, grant the person a complex and troubled existence.

The work presents a dramatic balance between two figures suspended by rope on opposing branches of a giant archetypal tree. While the arrangement initially reminded this critic of the old jazz song ‘Strange Fruit’, it is clear that the victims here represent a much more allegorical equation. Here, an animal (and animated) sexuality is contrasted with the passive inversion of a fashion choice. Whether the contrast is between male and female is moot. Ravens stalk each side, bringing with them a distinguished iconography ranging from folk parables to Edgar Allan Poe. The tree itself offers similar respectable cultural roots but the more germane meaning is surely in the way it dominates the assembly, stretches from floor to ceiling and embraces abutting walls. The tree is the reassuring growth or life that the artist can form attachments for, weigh up options and cultivate its outermost reaches. It is no coincidence that the artist is also an avid gardener.

Finally, the structure of an assembly also suggests the possibility for re-configuring elements for other sites or works. This flexibility is crucial in the work of Sally Smart of course and more of a convenience in the case of Kara Walker, but for Wellm it may yet provide another off-cut that in time will bear its own strange fruit. 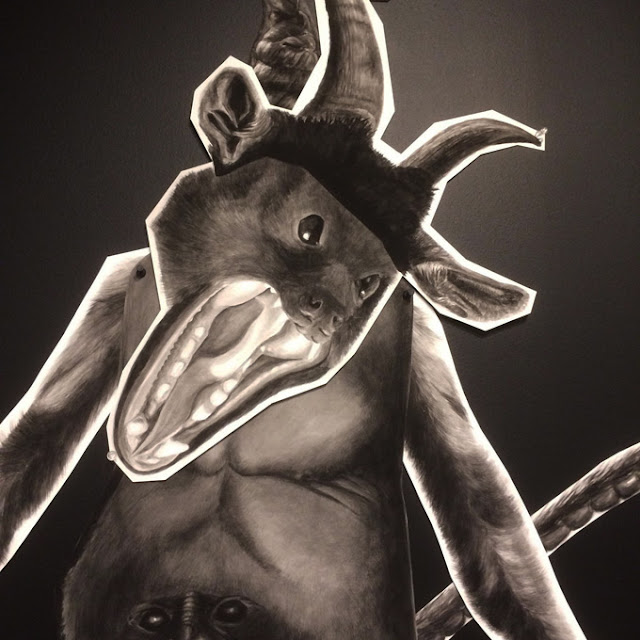 ALL IMAGES COURTESY OF THE ARTIST AND TACIT GALLERIESMy thanks to both for assistance in preparing this review.