This is the first solo show in Melbourne for the young Sydney artist, building upon a notable inclusion in a group show at the gallery last year. ‘Apfelschuss’ comprises twelve, mostly mid to large easel paintings, all oil and acrylic on canvas. The work deals in rippling figures amid vivid churning fields; exotic, vaguely Middle Eastern settings. Motifs of an apple, an arrow, a bow, a snake, goldfish, a candle, an oil lamp, a toy monkey and bleached bones hint at some mythic or symbolic meaning and in conversations with the dealer and artist this transpires to be a mash-up of a Persian folktale with the legend of William Tell shooting an apple from the head of his young son together with William Burroughs’ tragic re-enactment in which he shot his wife. The title of the show ‘Apfelschuss’ (‘apple shot’) is taken from the German generic term for a feat of marksmanship. 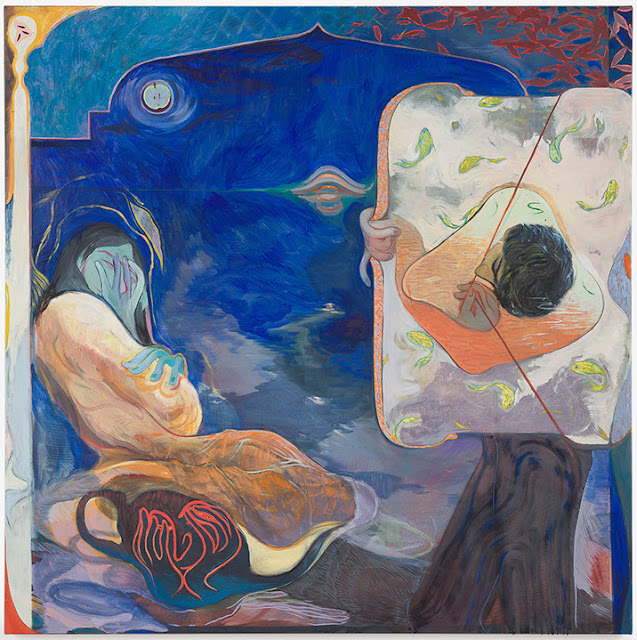 Yet very little of this is obvious in the works. We have several works featuring a long bow (rather than Tell’s crossbow) and rather than a child, the target would seem to be an eastern beauty, as in Throning (2019) where the apple serves more as a coronation than target practice, perhaps offers an interesting transposition for the roving folklorist. None of the works feature guns. 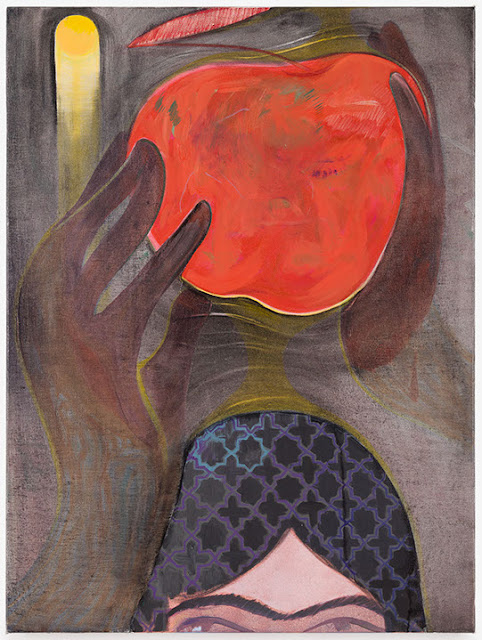 As for the role of goldfish, candles, a sea serpent and a clutch of drifting bones, presumably one must consult the relevant Persian folktale. There is, to be sure, some personal relevance in the artist’s father being Iranian and relating the scandal of Burroughs’ shooting to him as a young child, in which the artist then imagined Burroughs somewhere in Iran (or in pre-revolutionary times, Persia). Consequently, the substitution of an alluring beauty for the child throughout the series possibly acquires some psychological resonance. However, none of this really explains the nuts and bolts of the paintings - the curious, sinuous line to figures, and especially hands, the floating, surging grounds of rich colour and casual facture, the close attention to pattern and architectural framing devices. None of these things are particularly tied to myths of archery or family reverence yet these are foremost in our impressions.
The style has myriad precedents in variants of Symbolism, Art Nouveau and Expressionism and yet somehow remains resolutely contemporary. Its thin, broad washes, halting brushwork and abrupt juxtapositions in treatment, scale and drawing mark it as part of a trend to a more detached, circumspect encounter with the world. It is a trend that has largely followed in the wake of the work of Peter Doig, particularly his later work and to a lesser extent The New Leipzig School. It is an aesthetic that retreats, not so much historically, as socially or culturally, from stricter identities and more loaded or political issues. It is painting that often takes itself on holiday. Coincidentally, the work of Adam Lee currently on display at Station Gallery, provides another local exponent, albeit adopting somewhat different means.
Painting here assiduously avoids the rhetoric of cartoons or graffiti, as well as the trappings of realism or standard illustration and instead embraces something murkier and more fleeting in style, a network of allusions spun on a gossamer of technical incident and tinkered with patiently. 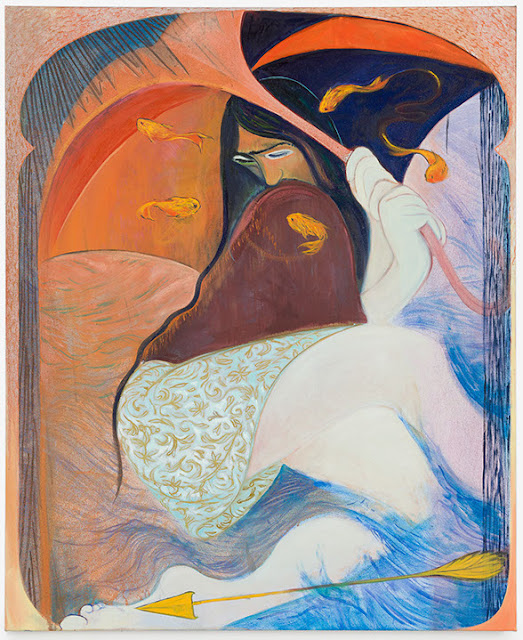 A work such as Fish Whispers (2019) for example may seem to court a deliberate inelegance in its disregard for anatomy and proportion, in a composition that weights so much to the upper right while seemingly abandoning the lower left tonally, that warps the umbrella arm held by the girl yet rigidly delineates the golden arrow below, lavishes delicacy to the flow of water but leaves limbs no more than outlined. This discord however actually serves to display a distinctive detachment, a drifting disengagement from standard and familiar styles in pursuit of something closer to a process or phase. The artist is certainly capable of elegance, as demonstrated by the circling goldfish, yet elegance in itself can never be enough under this shifting approach. The work is more like a compendium of linked techniques or forays that advance a theme obliquely, maintain a picture plane diffidently.

In this sense the paintings are firstly about a pattern of engagement, a flow of ideas, perfectly expressed in the serpentine line and aquatic imagery, a halting immersion, signalled in intricate, wispy details and decorative fields confining perspective, proffering an array of motifs, as in Night Shade (2019). 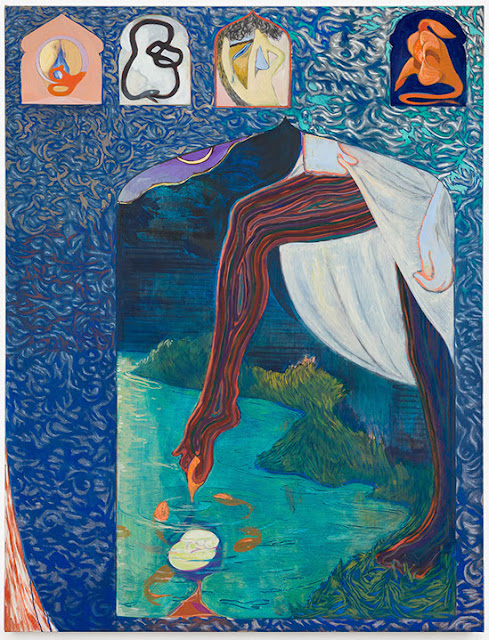 Titles it should be noted, scarcely advance a narrative, but rather emphasise an isolated, essentially opaque incident. Under the proposed reading, this too splinters a consistent or continuous tale and stresses a moment, a fleeting identification of content. Another reading may well posit a post colonial agenda and see the works as merging or blurring cultural traditions and while this too is an important thread to contemporary painting, this critic is inclined to see the engagement as markedly skittish or piecemeal at the level of execution, as an evasion as much as a sharing of underlying myth. Here the work trades firstly in exoticism, in the remote and esoteric. 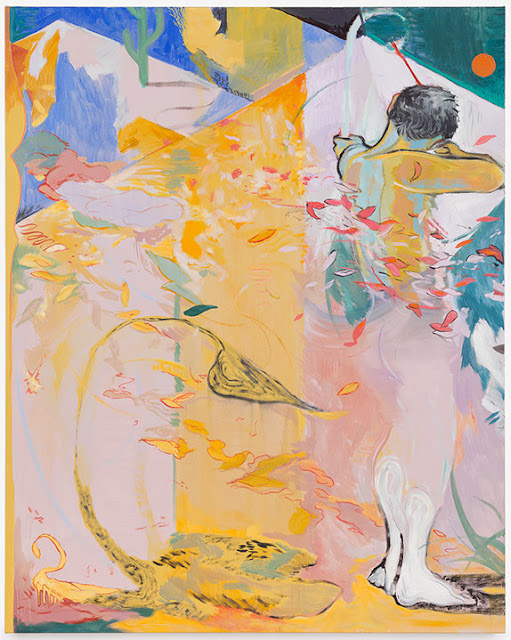 Further to the theme of marksmanship, Setting The Table (2019) with its full length archer, his back turned amid a swarm of goldfish, his target, deep within the painting, a barely sketched reclining female, offers the most compelling demonstration of this scattering of motifs and techniques, of a moving target in every sense. For many, this is the show’s standout. Here, only the slender left edge offers anything of a Persian cue while the notional apple hovers as no more than a red circle in the upper right, at once a sunset or rise, a prominent red dot mischievously urging gallery visitors or a red light for urban travellers. An extravagant shrubbery anchors the base of the composition while diagonal planes across the top assert the decorative over any more elaborate perspective. But all declare a swirl to events, to the shuffling composition, to a glimpse into paintings manifold and mysterious resources and a web of mythic possibilities. The title Setting The Table, presumably indicates this menu.
Finally, mention might also be made of one of the smaller, more curious works in the show, ‘Turn Off ' (2019) in which the switch in the back of a toy monkey is deactivated. 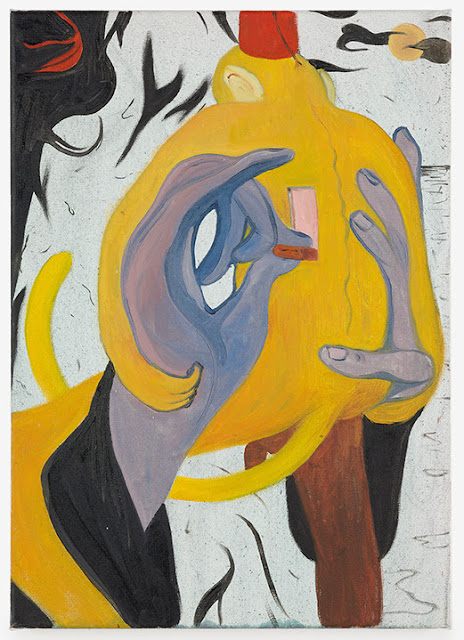 Yet ‘turn off’ may also signify an obstacle to sexual attraction and since so much of Apfelschuss toys with desire, the pun is hardly coincidental. A monkey too may carry associations of mere animal efficiency in sex, stupidity and or frivolity, but it is the intertwining of fingers and their cool grey pallor that finally suggest greater resonance. Many of the works highlight distinctive hand gestures and fingers in particular are elongated and curved, at odds with actual knuckles but giving them greater animation, a life of their own as probing, clinging extensions. In terms of the general theme, fingers are where the picture is literally felt. Hands often cup a face, not just for comfort or protection, but underlining a pictorial grasp of sensitivities. In a minor work like Turn Off that grasp becomes the focus and is carried through to a very precise sense of control. It is the work of an artist acutely aware of his options.