This review was written for the Scarlett Award for criticism on sculpture, in conjunction with the Lorne Sculpture Biennale of 2014. Unfortunately, I did not read the entry conditions closely enough and the date of the exhibition I chose to write about fell (just) outside the time frame allowed and so was disqualified. I include a slightly amended version here because it is not otherwise widely available.

The artist was born in Romania in 1945 and has been an Australian resident since 1982. He is the winner of several international and local prizes and a stalwart of the Melbourne art scene for many years. Zeitgeist comprised seven large figurative works in blackwood, variously waxed and painted, averaging around two metres high or wide. Firmly in the Modernist tradition, the works offered severely stylised figures and animals in teasing metaphor. The distinctive treatment of careful lamination contrasted with vigorously carved volumes, the rough and the smooth, together highlight process and material and suggested some vital contribution to the theme. Yet just how the zeitgeist or spirit of the times was to be interpreted in this way was by no means obvious. The theme perhaps initially suggests current economic or environmental decline, and while the choice of wood as material might support some ecological concern, there was little about the poses or choice of animals to suggest social stress or intolerable exploitation. Zeitgeist here was hardly so straightforward or pedestrian. Actually it turned out to be something rather more psychological and particular to the artist’s post-war generation.

Several shared features to the works revealed this spirit. As noted, technique conspicuously carved as well as laminated, added as well as subtracted form and flagged a crucial balance to resources and construction. Similarly, a balance was struck between finish and structure, ranging from paint and wax coatings to chiselled and incised surfaces, to revisions and discrete or fitted components. The balance lay in how much adjustment or revision the work can absorb before simply failing or falling mute. Finally, extending the play between incisions and additions, works highlighted an embedding of parts in contrast with less integral appending. Figures were often resolutely secured within larger objects, as in Crossing The Styx, where the rider is no more than a torso, his lower body embedded within the horse. 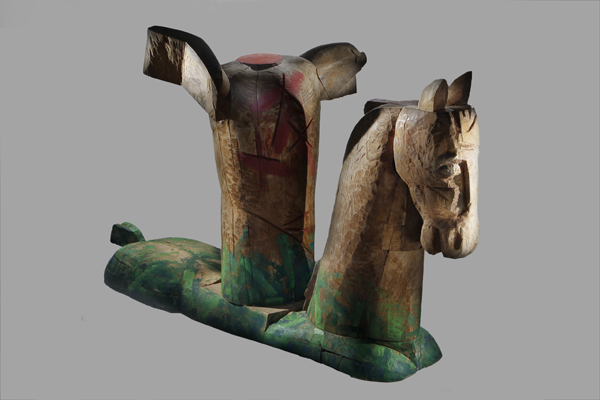 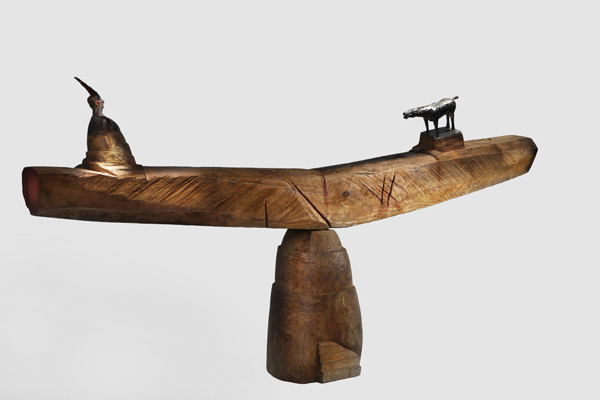 In Angst the figure is literally no more than a figurehead set upon a curious scale (again stressing balance). 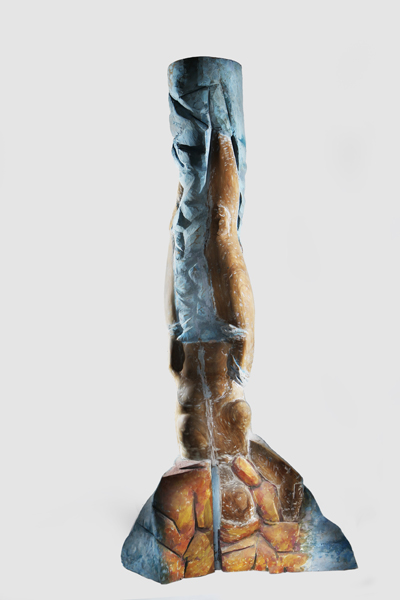 And in Blue Muse the female nude plunges headlong into the base, embodying an élan of commitment, a fixity of purpose, a finality of support. She is surely a muse of sculpture.

At the same time works dealt in a distended or dispersed identity, so that figures displayed pronounced components or appendages, as in the right arm to the rider in Crossing The Styx – even the absence of a head implies a similar exchange - while in Memorial (2012) the strange handle or blade affixed to the back of the head is at best some more abstract headwear or grooming, at worst, violent assault. However, the prominent addition also balances the radical incision to the face (on the other side of the head) that presumably flags eyes, with the red trickle of paint from its corner, most assuredly indicating a wound. 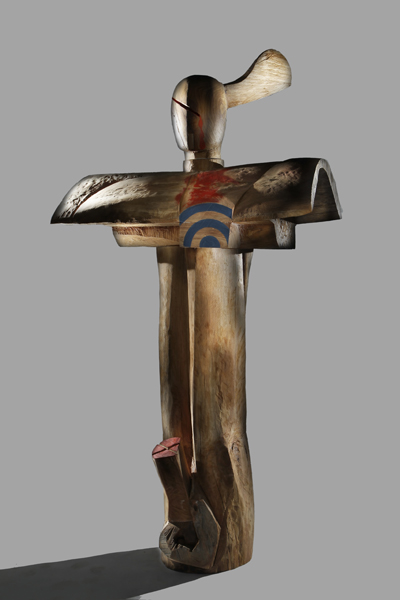 Adding some things only compromises others, would seem to be the message. But while body parts may be replaced or revised in this way, there was a further dispersal to the figure in the three works that feature animals, Crossing The Styx, Angst, and - surely the centrepiece to the show – Bob (2012). 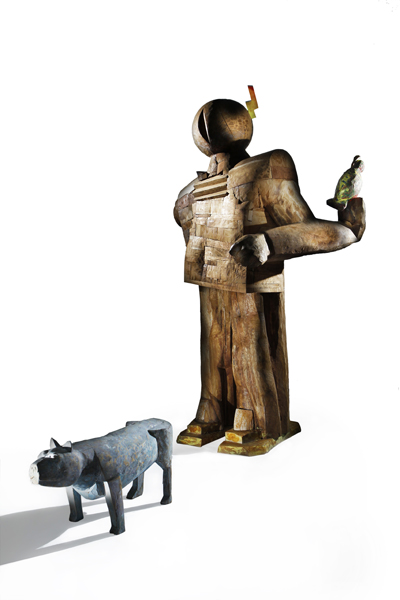 In Bob, the title may refer to man or dog obviously, but importantly covers both. For clearly, Bob is not fully Bob without his dog, his dog firstly an extension of Bob in every sense. Bob the man was further stretched by a lower right arm that extends forward and back, not through motion but as if a second lower arm had sprung from the back of the elbow. The forward lower arm provides a closed hand; the backward lower arm ends with a bird perched on the hand; another pet, another appendage. And again, the theme of balance or compromise, a mixing of messages or clumsy adaptation was gently ushered to the fore, contributed to a pervasive spirit.

But while Bob is manifestly many things on many occasions, the delicate balance finally imposes a crippling stasis, renders him disturbingly inert, inscrutable. He is many things and yet none. His face for example, is reduced to no more than a savage cleft, again echoing damage or reckless incision, while in other ways signalling a closed or defensive mask. In truth, it is not even clear which way the figure faces, where stylisation is granted such licence. Yet the feeling is not so much of a confused or anxious pose as a careworn, even resigned one. The figures were all firstly symbols of stubborn survival, of myriad adjustments, substitutions and adaptations that somehow retain a stoic gravity, literally, a wooden presence. Here we start to grasp a guiding spirit. For the various balances and accommodations are all made on the basis of prior commitments; whether to materials, form or content. They are concerned with the constraints to change within a given structure, with maintaining integrity or consistency while adapting to new circumstances, further possibilities. At a certain point we cannot change without losing too much of our past. We are trapped by obligations, habit and inclination, no matter how urgent or attractive change may be. Actually, at a certain point we can no longer even speak for ourselves, where we have a position to protect, others to think of. Here the spirit is one of agonised concession, mute acquiescence.

Where we stretch to meet new needs the attenuation may only make us more compromised, more diffuse and wishy-washy. We are then all the more feeble for having made the effort. Obviously this is a complaint those more advanced in life will recognise more readily. It is surely no accident that the sculptor belongs to the baby-boomer generation, that vast demographic that for a member might easily represent an age to this spirit, a sprawling entrenchment of interests that ultimately spells stagnation and decline. The mood was almost elegiac, unmistakably one of quiet exhaustion perhaps defeat. Crossing The Styx plainly addresses death, not strictly on classical terms, but again, as a negotiation, a reinterpretation of tradition. Sexuality is explicitly linked to the theme of time or aging in works titled Memorial and Time Piece (2012). In Memorial an erect phallus branches from the base of the torso, is painted red to echo the trickle of blood from the eyes and is sheltered by striking roof-like shoulders. Virility lurks beneath our shouldered burdens and sacrifices; but it too has a use-by date, might be the epitaph. 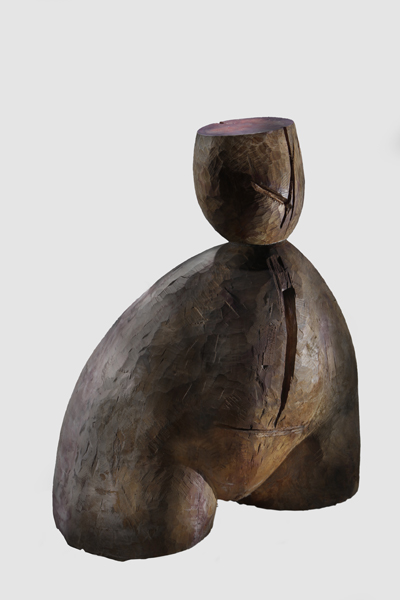 In Time Piece a woman is reduced to just a mound of hips and thighs, topped with a tiny cup-like head, the balance here reflecting a traditional duality. Both bear stark lacerations that equate womb with face, suggest a body clock pacing temperament, foiled or aborted amendment. The brutality of the incisions might equally convey a sense of impotence or futility. The spirit may be willing, but the flesh, after a time, is not.

These are variations on the theme. The spirit touches upon them but sweeps over much more, the life much lived, the work much loved, an art and tradition quietly revised. It leaves them at best reconciled, at worst diminished. The mood, as noted, is one of stoic exhaustion. It is not the zeitgeist many will welcome or even recognise, although those inclined to the long view, the big picture, would do well to heed the detail. There is a sting in the tail. The spirit might also apply to economies or ecologies, but to see this implied in the figures is to torture the theme, exceed valid interpretation. The seventh and final work to the show, Ladder (2012) was the least successful thematically, concerned less with revision or a balance of techniques than plays on scale and perspective. However the show was strong enough to permit this digression. The theme, while subtle, also served to demonstrate the sophistication and resources still available to a Modernist idiom. The dedication to the medium, to first principles of carving or construction, is here paid a moving tribute, rather than strictly eulogy. 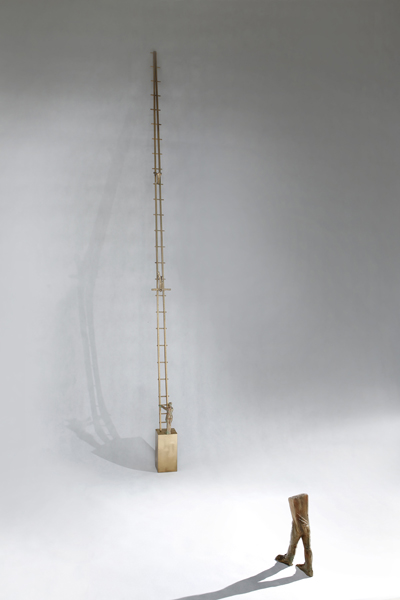 For Modernism no longer holds much interest for sculpture, of course. In closing, it is worth briefly considering the difference between more recent practices and Modernist fundamentals and whether Zeitgeist holds any lessons for current sculpture. Post Modernist sculpture more or less exchanges a ‘truth to materials’ for a ‘truth to market application’ and looks to shifts in context, in quantity or quality to reshape meaning, renew art. The sculptor now is less interested in starting from scratch, from a ‘pure’ material than in proceeding to unexpected uses from given forms. And the forms are not really those of the canon or tradition but those achieving current popularity or prominence in the practicalities of daily life. The focus is not so much the ready-made as the readily made, the forms easily commissioned or fabricated. Society’s default settings for manufacture become the building blocks for the contemporary sculptor. For figurative work this has tended to result in the adoption of popular figurines or toys and their redeployment as a way of constructing more challenging roles or themes. Work may be slickly industrial, as in a Jeff Koons or Murakami, or ravaged and distressed as in the collections of toys by Mike Kelley, but the objective remains to re-present them in a new or surprising way. A variant is the adoption of commercial standards of model-making, as a Ron Mueck, Patricia Piccinini or Tony Matelli, where applications pursue provocative fiction and scale.

Yet the retreat to low culture, to minor social custom for a source obviously has its limits. Sooner or later the distinction between high and low, traditional and popular erodes or blurs. At a certain point industrial or vernacular forms cannot reveal new roles or uses because after successive and successful transfers, their source is no longer so strict or remote, their target as unexpected or beguiling. The whole strategy has a shelf-life, inevitably becomes stale and predictable. At that point the sculptor can no longer simply work with ready givens, no longer rely on just working contexts. ‘Pure’ assembly is then no more effective than ‘pure’ carving or modelling. The tools for prying a form free of its source, for repositioning it in a receptive context then swing back to a more analytical mode, must take a little more from tradition, if a little less from current custom. Some current practice, such as the work of young British sculptor Cathie Pilkington, already broaches this issue; makes teasing hybrids between found or given forms and modelled or carved augmentation. Her themes are very different from Zeitgeist but there seems to be a convergence of means that offers new scope. For Turcu’s part, Angst also includes a small, very Marini-like casting of a horse, a surprising nod to appropriation or a Post Modern eclecticism for the artist, but again, indicating a breadth of means available and the reach of the theme (Marini too, a Late Modernist).

So some rapprochement or reconciliation between idioms is available and ultimately desirable. In as much as Zeitgeist holds a lesson for contemporary sculpture, it is that delegation and out-sourcing only ask more of supervision when the going gets tough, beg hands-on experience. And this experience in turn, discloses the dearest themes, the most effective means.

All images courtesy of the artist and Place Gallery.

My gratitude to both for assistance in preparing this review.