The casual visitor could be forgiven for supposing the show of nineteen paintings and prints no more than the brave efforts of a demented outsider, in keeping with the modest store-front venue. The artist was certainly amused by the conceit however this was actually another serendipitous chapter from one of the hardy perennials of the Melbourne art scene – Gary James, A.K.A. ‘Spook’. With a career stretching back to the seventies, inclusion in more than forty group shows, spells with mainstream galleries, William Mora and Ray Hughes (Sydney), many more in lesser venues, acquisitions in public and corporate collections and an array of day jobs from gallery installation technician to cafe muralist and archaeological site illustrator, Spook somehow continues to haunt the margins, to trade in a shrewd versatility and to pursue a vision both comic and perverse for painting and people.

While satire has been a staple of his work since the nineties, the show was a marked departure in style. The artist’s signature has hitherto been for a more polished grotesquery, exemplified by his works documenting travels in India and China from the turn of the century and his epic tribute to rock culture The Big Day Out in 2004. 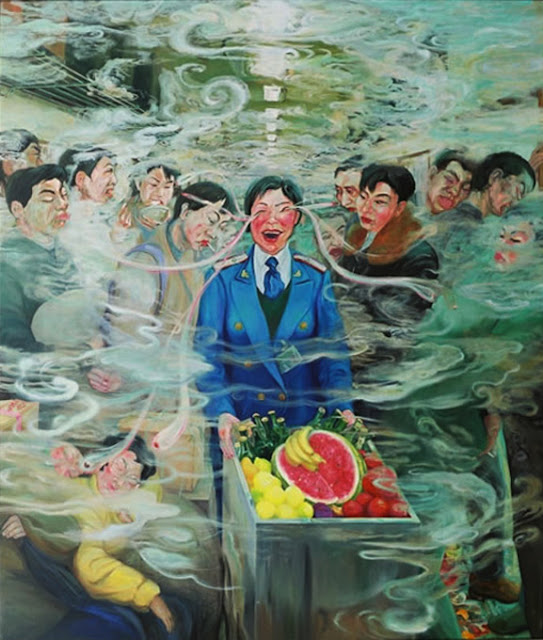 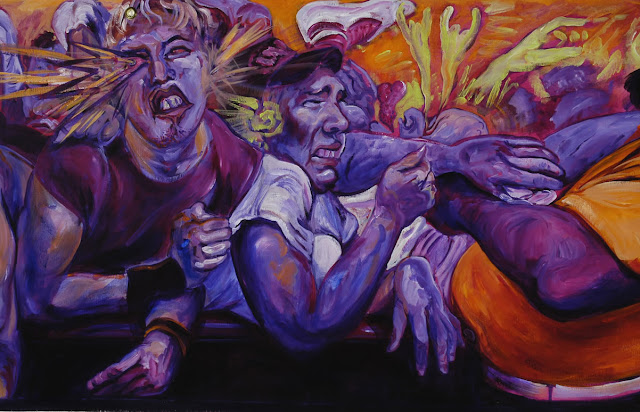 For the visitor ignoring gallery documents, the confusion was thus understandable. But obviously this was more than just an in-joke or art world prank. The artist had embarked upon a new phase and radically refocused themes and treatment. The change is worth considering for two reasons. Firstly, for a more comprehensive understanding of the artist’s style, and the part this plays in meaning to works, secondly, for how this reflects undercurrents to local figurative painting.

Spook divides his career in two. His youthful works throughout the seventies and eighties that concentrate on realistic portraiture and a deconstruction of pictorial conventions, most of which he destroyed, and his mature work from the later nineties onward, that take a more comic and satirical approach, for which he is best known. The transition is more or less provided by his football-related works, usually done to accompany the annual Footy Art Shows he organised at the Fitzroy Nursery Artist’s Garden Gallery from 1991 to 2014. As noted, the work advances with his travels in India (1998) and China (2000, 2003). Here he developed a more discursive structure, flowing from figures to events and places, finding pictorial devices for outrageous noises and smells and a more surreal and exuberant treatment of public stares or directed gazes, as in Watermelon Woman (2001). Here he truly finds himself as an artist. Yet the work remains centred on the figure. Spook is never really a landscape, architecture or still life painter, no matter how exotic the location.

Rather than dwell on individual foibles, the figure now provides a springboard into rich social, political and historical allusion. Seemingly, distance lent perspective. While inevitably drawn to caricature and some knowing pastiche, such as the Mao-themed public litter bin in The Mist (2000) or the pandas of Bamboo Garden Hotel (2000) with their subtle Tang Dynasty palette, it is the range of roles available to an event, the multitude of levels for allusion that are the abiding theme. 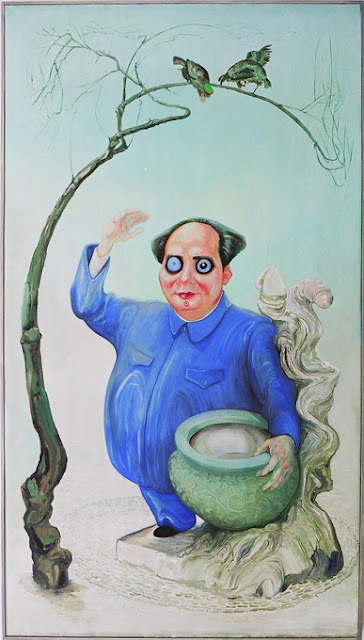 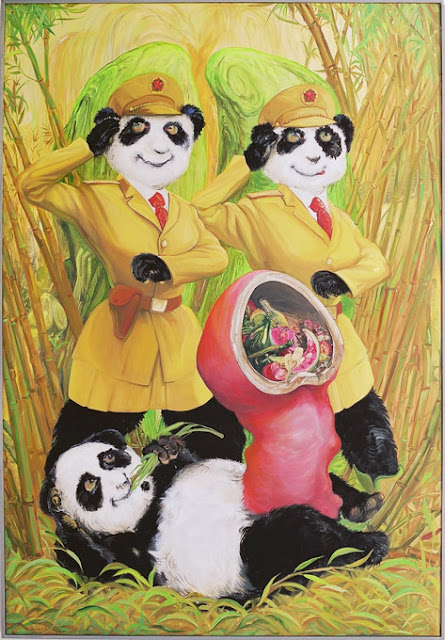 If roving eyes (quite literally) are often at cross purposes with other gestures, figures are stretched in frantic multi-tasking, may be costumed as mascots or dissolve spookily into clouds of noxious fumes, hover there as venerable icons or serve merely as sexual ornaments to an extravagant banquet, as in Dream of Jang Jing (2003?) surely one of the artist’s masterpieces, in the true sense of the word.

The whole riotous gamut lends itself to panoramas and whether horizontal or vertical, this range to figures rather than any imposing distance or vista suggests a structure for the subsequent Toilet series. The series began as records of travels in Egypt and Israel in 2007, but persistent bowel problems confined the artist’s adventures and when his partner offered him the amusing volume, What’s Your Poo Telling You? by Josh Richman and Anish Sheth, Spook was promptly inspired by the vision of a dialogue with one’s number twos, with their perspective on matters generally.

The series ended up containing little that actually relates to the Middle East (the exception being No.5 ‘Mr Dung Savours the Seven Wonders of the Colonial Nebulae’). The artist maintains that something of an Egyptian frontality informs the style, but it is the tall, narrow format on un-stretched canvas, the meandering curves and cartoon-like figures that are foremost. The effect is a bit like Michael Leunig channelling Enzo Cuchi or Robert Colescott. This is amusing in itself of course, yet the insistent facture, the coarseness of the loose supports and the stark contrast between looming aspirations and plunging waste, give the pictures a new peremptory tone, a provocative terseness. Because of these qualities to surface and format, installation views have been preferred in reproduction. 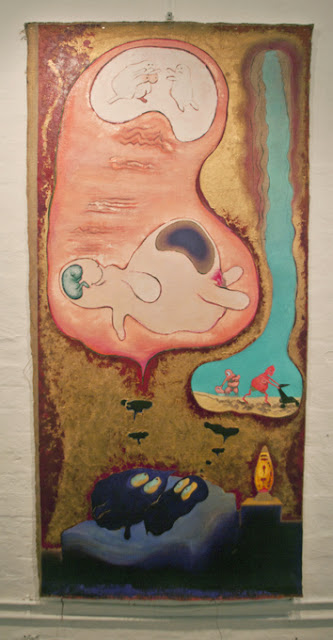 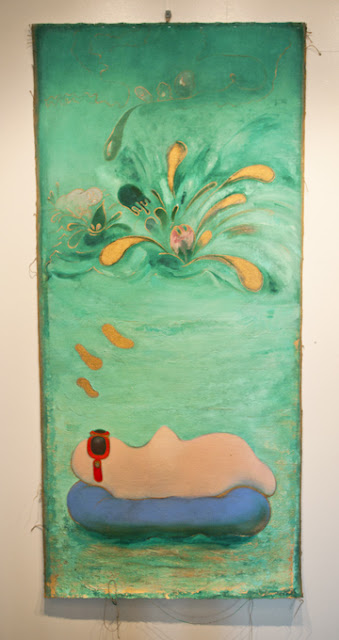 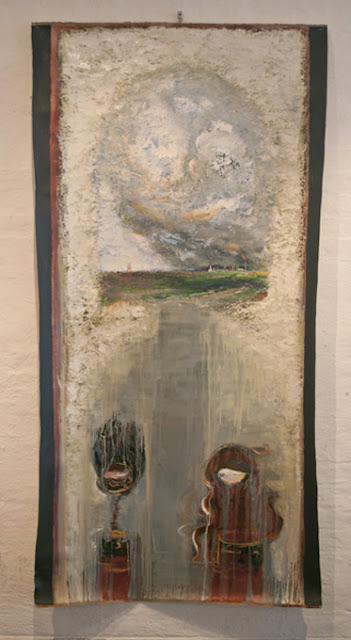 Here the Rabelaisian humour all but disappears under painterly vigour. The turd’s eye view has become a turgid accretion and even this is slyly mocked by deft detail of the distant sewerage works, on closer inspection. 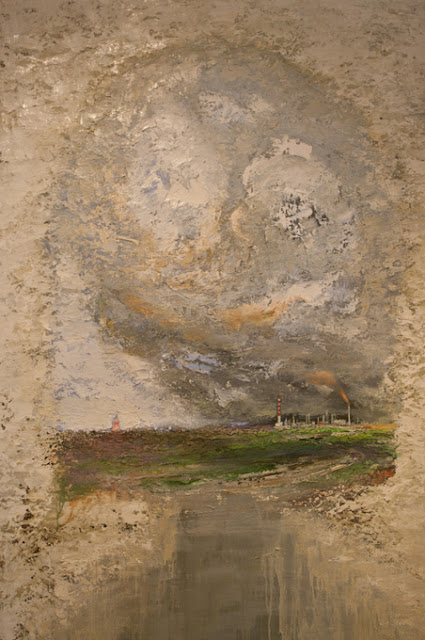 Detail to Mr and Mrs Werribee... with distant sewer works

The show’s title ‘Adventures in Archaeology’ suggests excavation and reconstruction and while Spook has a genuine interest in the science, for his paintings the process often seems the reverse, one of resisting recognition or distancing a goal. Here, the heavy facture does not just labour the joke, it strands it in ponderous abstraction. Painting too has its high end and bottom line, its form and content, and as the artist grows more expansive in his toilet perspective, pitting sewerage against heritage, the appeal is to the literal support and material; partly as some further dissolution of faith or dreams, partly as a blocking or shoring up of resources. Surprisingly, this device carries echoes of the artist’s youthful work, such as Off The Stretcher, Up Against The Wall (1976-77) where a portrait of unrequited love is embellished with urgent text, inset photographs and a collage approach that records the artist’s inability to fully engage with his subject. 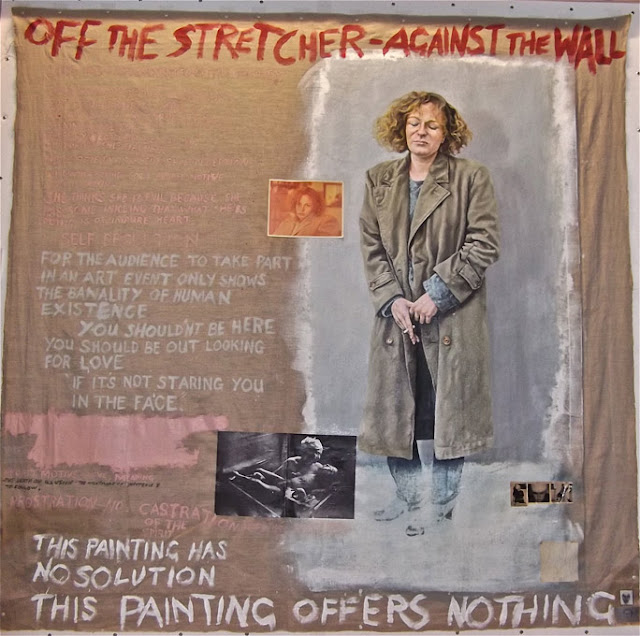 It is a melodramatic admission of defeat, not only for the artist but the resources of painting. Here too the artist resorts to the un-stretched canvas as a stark fundamental, an adequate foundation for an expansive concept. Forty years on, the artist recovers the rhetoric, does not so much hold a notional realism and person in check by it, but rather a digested array from the abstract to the concrete, from loved to loathed. In this sense the show does achieve a kind of archaeology in which the artist’s youthful inclinations are recovered and a deeper understanding of person and painting reached. We see not just that the artist’s style has greater scope than supposed, but that it demonstrates an underlying consistency and tenor. From a show that initially appeared little more than a joke, the patient visitor eventually encounters a far more subtle and sophisticated one.

Finally, such practice is obviously some distance from the fashions of the mainstream and public galleries. The doctrinaire salutes to identity politics and cultural correctness play no part in Spook’s more arcane researches. The whole clamouring farce of prizes, grants, scholarships, residencies and surveys that are eagerly enlisted by curatorial networks to foster respect in the market have proved irrelevant. If anything, their profusion only signals conformity and doubt. At sixty-four, the artist continues on his way, part of the great groundswell in imagination, dedication and expertise to the local scene that raises standards, sadly without due reward.

ALL IMAGES COURTESY OF THE ARTIST.
MY THANKS FOR HELP FROM ARTIST AND GALLERY IN PREPARING THIS REVIEW.