I first encountered the artist’s work on the web, had heard of positive reviews and liked what I saw. So I was grateful for this opportunity to see the actual photographs and was not disappointed. Even photographic reproductions can mislead in scale, illumination and colour and are at best a rough guide but in this case the prints exceed expectation in size, resolution and superb tonal range. In recent years the artist has concentrated on flowers, viewed in close-up at twilight, emphasising an alien, decidedly sinister world. The title of the current series (and show) Flores Venerae gives little away, part Spanish for flowers, part combination of perhaps venerable and venereal. The opening speech by David O’ Halloran, an invited curator, was firmly in favour of the erotic and it is assuredly foremost in earlier work. But while flowers have a long and venerable tradition as symbols for sex or passion, here the sense is less of disease than mystery. To see them as possibly the mysterious and fascinating symptoms of sexually transmitted disease, for instance, seems troubling on any number of levels or frankly comic and neither tallies with the elegance and subtlety of the pictures. The title is better treated as simply a surreal rejection of standard associations and an affirmation of their dark side. 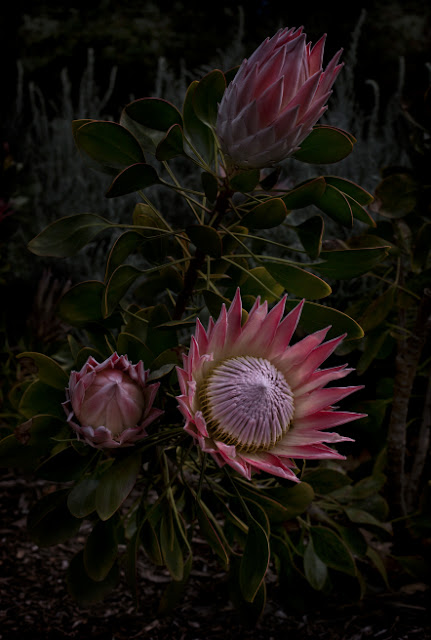 What is the dark side of passion? It need not be repulsion actually, but something more insidious. In as much as this can be represented by flowers, one might start by noting that the pictures are not of isolated specimens or a traditional still life, but of actual gardens and so are properly small landscapes. The actual locations turn out to include a range of Asian as well as Australian cities, for some reason. The flowers occupy not just a curiously glowing foreground but recede into a darkened background and while the focus is on a single specimen we are aware of the profusion of growth around it, often of overlapping or intertwining parts. It is often not easy to see where one plant begins and another ends, or indeed what is not a plant. This indefinite spreading or sprawling, I submit, is really a prime feature of the dark side and makes it more of a dark place. If the flowers deal in sexual allure, the mystery lies not so much in rampant proliferation or propagation but in the unseen and incalculable implications. The thrill or threat does not remain in just genitalia but extends to other, higher organs, other matters. That looms as the great unknown, the surrounding darkness to the moment. 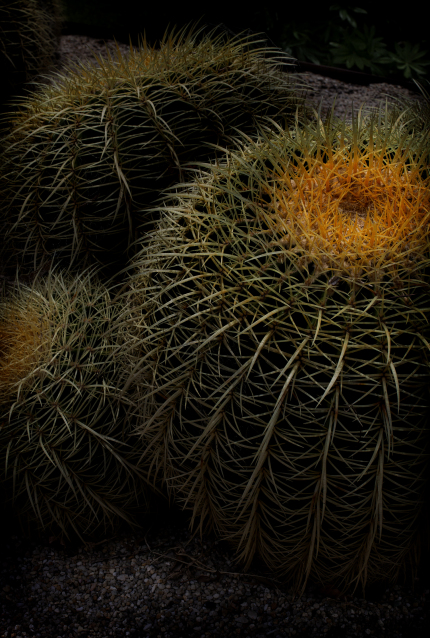 The sense of danger or menace is explicit in the pictures of cacti with their formidable array of spines, although these were less in evidence than in the 2015 series Naked Garden, where the pictures were confined to black and white, giving them a more austere and formal detachment. But elaborate defences hold their own attractions for some and such intimate contemplation only adds to an ominous atmosphere.  Exoticism may seem part of the attraction but in an email the artist stressed that strangeness is not always sexy for his pictures and that may be more of a distraction. It is often familiar flowers, seen at the right time and place that best demonstrate the allure he seeks. 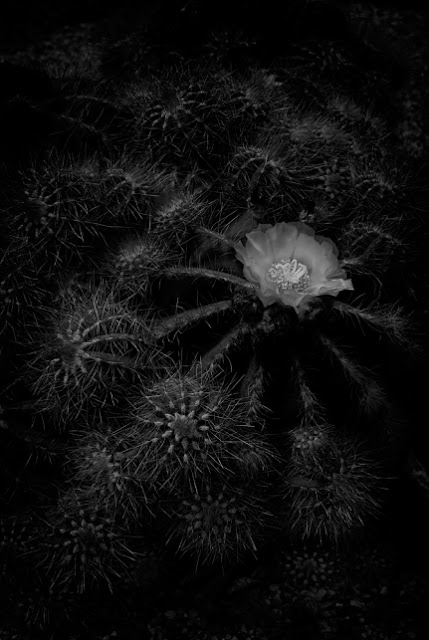 Reviewing the Naked Garden series, The Age critic Robert Nelson concluded that the aim was essentially sculptural and dealt with seeing exotic plants as elaborate exercises in mass and volume, and while this gets at the curious ambiguity of scale, it hardly accounts for the darkness or contiguity, or why the ‘sculptures’ should be viewed by night, and if by a voyeur (as he supposed) one of decidedly dry interests. The photographer also affirmed an interest in complex botanical structure, which partly explains the choice of cacti, but again begs the question of the role of darkness and overgrowth. Interestingly, where the photographer focuses on a single flower and allows the background to be just black or blank, as in the Untitled series from 2016, the effect is closer to a botanical specimen or document. The lighting, while still low key, does not quite bring another world. 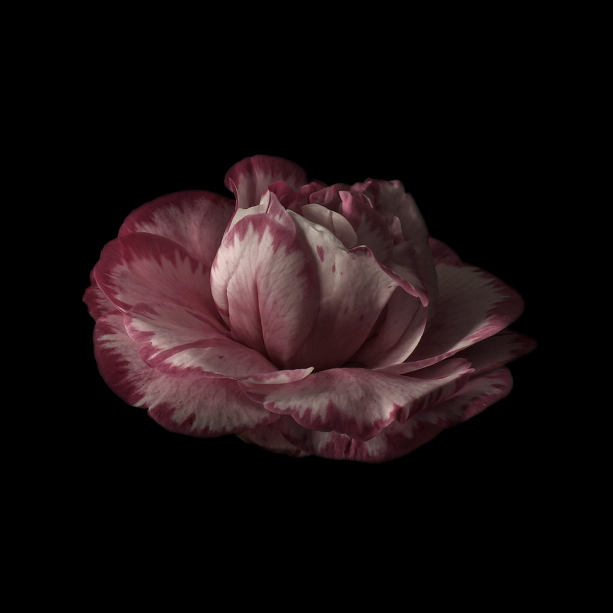 When does a literal document become something more? Generally this is a matter of precedent and practice and depends as much on choice of subject as treatment or technique. Issues of realism and objectivity are hotly disputed in any case and photography has its factions, either passively recording events or staging highlights and issues and in various combinations. Bigot’s position here is as intriguing as his loiterings in the twilight zone. He is also a thoughtful and articulate artist and I have drawn on his statement for the Naked Garden show, reprinted on his website. While he identifies with street photography and a faith in recording surroundings, he nevertheless is drawn to its quietest moments, most traditional corners. And while he works with a small camera without a tripod in order to quickly take advantage of city gardens encountered at a suitable hour, what he wants from his flowers is no longer strictly a matter of observation but rather intervention or construction. The structure to petals and stems is subtly massaged by torch light. One gradually realises that the light is not just the ambient light of dusk or distant moonlight or even streetlight. The light is too diffuse, shadows too soft for that. It is in fact subtly supplemented by the photographer and it is this heightened or dream-like glow that grants the images a symbolic rather than botanical meaning. It is what makes the darkness an expressive rather than literal situation. Consequently, the plants smooth emergence or retreat into shadow takes on a strange prominence and renders distance and scale mysterious. 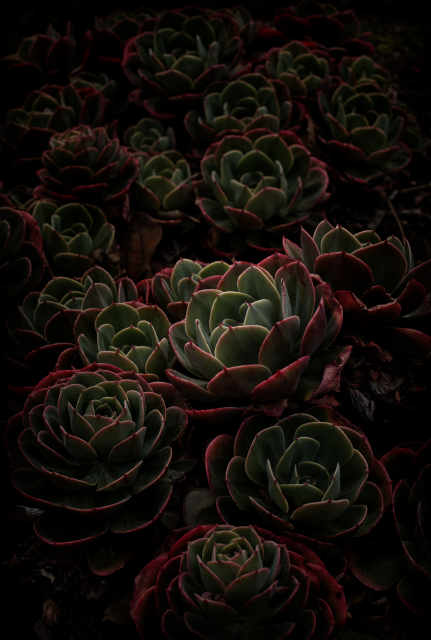 With the digital revolution, much of this could have been accomplished with software and initially I supposed that Bigot, like so many contemporary photographers, manipulated his images in Photoshop. However this reckons without his commitment to reportage, an allegiance to street photography, where framing and exposure must be caught in the moment. The more considered judgement available with software, no matter how convenient, is thus antithetical to his aesthetic although he concedes that some minor tweaking to hue intensity is done in Photoshop, but this little more than traditional dark room adjustments. In this too, the photographer is distinctive and one cannot help wondering where this approach might lead, what further subjects lend themselves to such treatment?

Earlier work, as noted, has dealt with the frankly erotic in darkened surroundings. There, dramatic angles and solarising possibly owe something to Man Ray, while a series from 2015 called A Place which Keeps Calling Me deals in giddy high-rise perspectives reduced to trails of lights in the night and a futuristic desolation. Other work from 2013-2015 picks out vintage city alleys around Melbourne by night and feel almost like movie sets. It comes as little surprise to then learn that Bigot spent twenty years working in the French cinema mostly as a film editor, later as an assistant director and that he has also made short videos which share nocturnal settings. The movies deal in wordless surreal scenarios involving a woman (performed by Jane Burton) in darkened interiors. Formal concerns there lie more with theatrical or Film Noir lighting, ghostly events and a simmering ambient soundtrack. The effect, which might have been nostalgic or a pastiche, is closer to say, David Lynch than Jacques Tourneur and retains an edge, invites longer, more elaborate narratives. All confirm a taste for the dark, sexy and surreal and reveal Flores Venerae as a new refinement with colour, a greater restraint to the erotic or decadent.

Digital photography has also brought a convergence with video, so it is not surprising to find photographers adding longer time spans and motion to their pictures. In this regard the videos might appear more central to Bigot’s concerns than stills but the artist sees both formats as equally valuable and viable. This greater scope suggests that while remaining on the dark side, Bigot is unlikely to settle for anything too predictable or comfortable.

All images courtesy of the artist.

My gratitude for assistance in preparing this review.

The artist's site
An interview with Angela Tandori