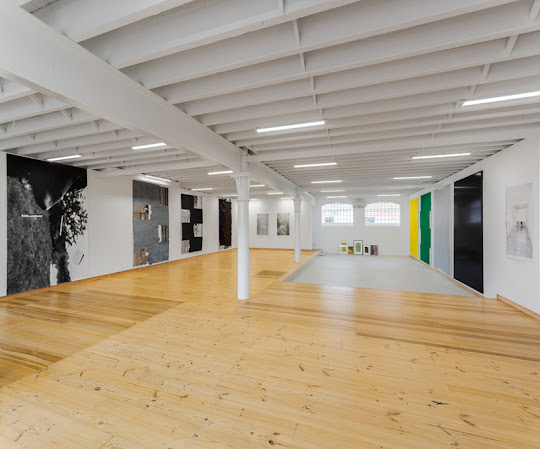 Installation view
The show consisted of eight large paintings, three medium-sized grey works on photographs, pinned directly to the wall and five smaller, framed works, simply leant against the far wall. It was a notable show on two counts. Firstly it declared a frank Minimalist heritage, quite distinct from more baroque variants of abstraction by younger exponents much in evidence of late. Here the familiar repertory of monochromes, stripes and grids are mainly practised upon black and white photographs, these printed on long strips of paper combined as panels in the larger works, no more than pinned in place, some surprisingly delicate in weight. The substantial catalogue appealed to the foundations of painting in ‘colour’ ‘materiality’ and the conditions or circumstances under which these are displayed, their temporal or transient nature. Normally all this would pass as just dry, academic concerns, but in the current art world climate, dominated by Identity Art and social profiling as pictorial meaning, the show demonstrated a striking reversal or mirror-image to that process; a stark reminder of the roots and routes to pictorial meaning.

The second plus was how effective the display was for the distinctive Blockprojects architecture, with its low industrial ceiling and broad floor area, which can often intrude or squeeze the viewer’s more long range appreciation, but here, with works that stretch from floor to ceiling, precisely these circumstances are boldly confronted and converted to a measure of the work’s stature and material resources, very much a hallmark of the Minimalist approach. 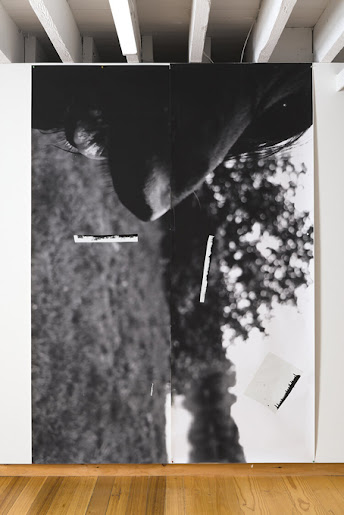 This is to be a more polemical review than usual, but given the stagnation on offer elsewhere, a needed one. Before advancing the argument however, there are the particulars to Moving Times. David Thomas (b. 1951) is a veteran of the Melbourne scene with an extensive exhibition record here and overseas as well as a senior academic at the RMIT. Essentially a cautious, introspective man, his work did not find its mature style until a series of studio residencies in Paris in the early nineties, where exposure to French Minimalism through the BMPT group and the Supports/Surfaces movement found resonance. His work duly proceeds through stripes and symmetries, modular constructions and stricter geometry to monochromes, while frequently retaining a smaller, adjacent photographic panel, almost as a footnote. Over the years this composite identity for the work has been pursued variously as installation, collaboration, site-specific and temporary works. 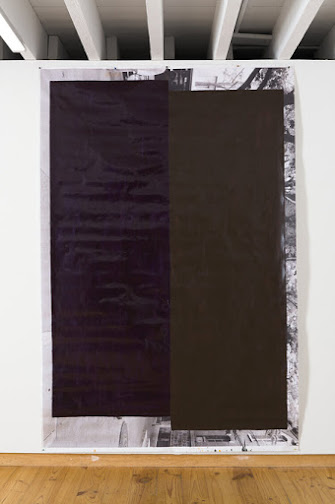 Shifts in Time – Violet and Brown (2019) 250 X 183 cm acrylic on photograph
An extensive career survey at the RMIT Hub Design in 2017 brought together a hundred works covering forty years, with the title Colouring Impermanence flagging abiding themes of colour definition and context. Moving Times reprises these and gives new prominence to the photographic element. All the photographs are the artist’s work, are generally nondescript urban landscapes and are rotated to the right in orientation or presented on their side. None depict notably public events or attempt conspicuous composition or camerawork. Rather, they read as casual, deliberately private or personal records. This gives the painted portions less of a sense of censure or correction than accommodation of a withdrawal or calculated subtraction. The reorientation of the photograph onto its side signals the work’s indifference to a standard reading of its content, to its figuration, and a reassignment to relations with painted portions of the work, notably of tonal range. 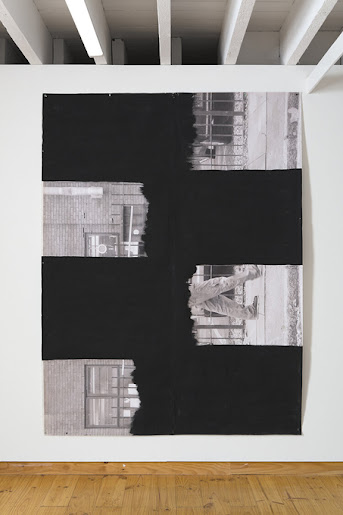 The Movement of Colour/Black (2018-9) 240 X 180 cm acrylic on digital photograph
In a work such as The Movement of Colour/Black (2018-9) the steel fence and window frames are also prominently realigned as vertical and horizontal elements, divisions urged by painted parts, and carry an intensely formalist concern not only from photograph to painting, document to expression, but crucially from figuration to abstraction. For Thomas, this alerts the viewer to the act of ‘looking’ - a movement of sorts - but in a very loaded, narrow focus. The work in this way grants the Minimalist an engagement with the world – and the artist’s achievement here is surely to make explicit this relation – but it remains a retreat, a time-out from the business of living, a brief consolation amid the fundamentals of tone and shape.

On the facing wall, the artist’s equally large monochromes deal in integrity or consistency of a colour, depending on viewing distance and application of pigment - the ‘materiality’ in the literature (traditionally recognised as facture). Here Thomas’ touch is anxious to signal a lightness and fluency, a patience and deliberation, a kind of relaxed ‘slow painting’, albeit of a fairly modest task. Concerns with a unitary colour identity for a work - or as a work - go to the heart of Minimalism and it was the steady concession to additional properties for painting, as qualification, that eventually exhausted the project. 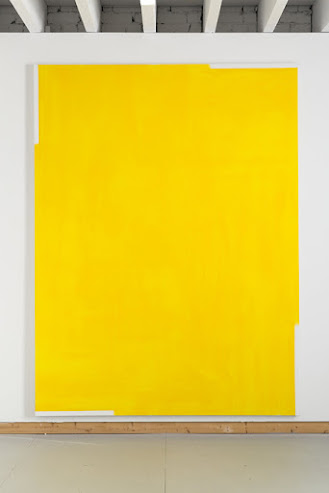 When A Still Painting Shows Us That We Are Moving (2016) 244 X 183 cm acrylic on linen
At this point a polemic is introduced. Very briefly, in the fifties, matters of colour identity in painting were tested against scale, shape, support or surface, application and pigment for a nagging equivocation. In a nutshell, the colour of a shape or the shape of a colour, its size, consistency and constituency fuse into one irreducible instance – the sign of itself. Painting as picture can be reduced to this much. With Minimalism, by the sixties, shape is confined to stricter symmetries, initially, stripes, monochromes and grids, which soon suggest the frame itself participate, by thickness to sides and as novel ‘shaped canvases’. Elsewhere, shape and colour are determined by more radical pouring to application, suitable support and these in turn prompt novel pigment concoctions although severely limit shape options and rapidly acquire a three-dimensional or sculptural project. Scale as a factor soon suggests an architectural dimension which confines application, support and pigment in some ways, while elegantly declaring stripe, grid or monochrome in complimentary setting. You cannot have it all in one go, is the message eventually. Minimalism, as a quest for a fixed foundation for painting expires in myriad factors, factions, combinations and variation, finally proves chimerical. By the end of the seventies, critics rashly conclude the death of painting. Even to declare the death of abstraction proves premature, but effectively the project loses momentum as a guiding intellectual doctrine, is soon overshadowed by post modernist perspectives.

What has become clear by 2021, however, is that Post Modernism proved no more than an interval as the quest for intrinsic properties for painting was gradually exchanged for extrinsic properties, for social and political factors determining a work. One looks inward, for the core of form, the other looks outward, to the social network in which it arises, for content. One sees the work representing itself; the other sees the work representing the artist. Both are finally crippled by dogma, but essentially address different needs. Identity Art finds greatest application in the growing levels of art administration, in public collections and their networks, education and the profusion of art awards that now replace criticism. The concern really is with an equitable distribution of recognition for works according to favoured social profiles of artists. Yet the project is inconvenienced where the same profile results in strikingly different styles, cannot explain how a work then refers to or represents the artist, no matter how worthy the content. The project is simply blind to formal differences beyond mere illustration, can only endorse a sprawling pluralism, which in turn offers no measure for awards or recognition. 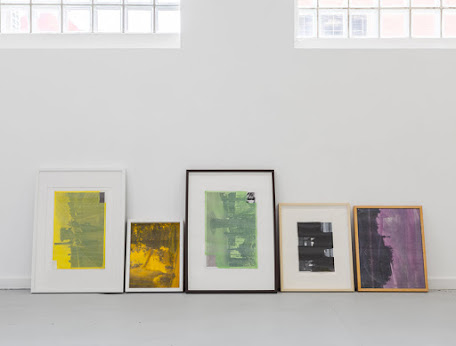 While too much form proved stultifying, too little simply grinds matters to a halt. Similarly, fear of a ‘grand narrative’ leaves art history in limbo, can only be revisited in the interests of a favoured social segment or profile. How does one recover a crucial cultural consensus? This is really part of a much broader problem, but within the sphere of art, the role of depiction or figuration cannot be confined solely to painting, the role of painting confined exclusively to figuration. The formal resources of painting need to be seen in relation to broader pictorial practices. A show like Moving Times, with its sly play upon moving (as motion or emotion) provides a surprising and timely reminder of the problem and the consequences of neglect. For an artist like Thomas it provides a vehicle of measured contemplation, somewhat like a Buddhist meditation on representation. It comes as no surprise that the artist is also an authority on traditional and contemporary Asian art, but abstraction has other uses, painting has other options. A re-engagement with the problem is overdue and underestimated. 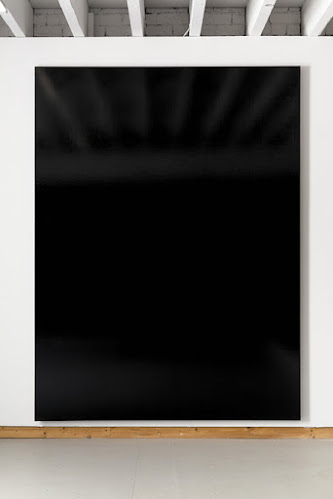 ALL IMAGES COURTESY OF THE ARTIST AND BLOCKPROJECTS

My thanks to both for help in preparing this review