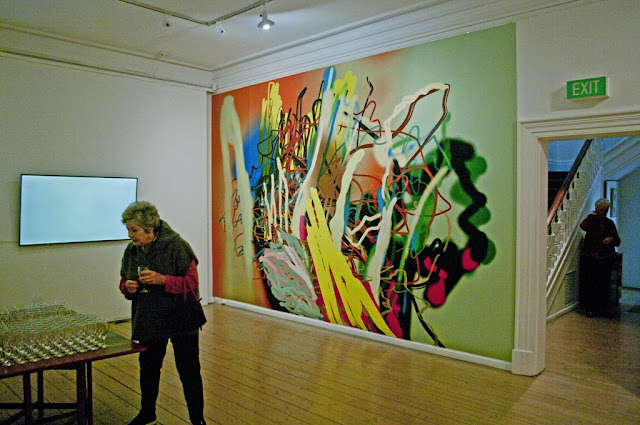 The artist is a veteran of digital abstraction, something he adopted in the late nineties, initially as adjunct to his interests as a painter. The ensuing years have seen his printing activities become his signature. He has expanded them to architectural proportions or as temporary installations, branched into motion graphics and broadened his software repertoire with 3-D modelling. But the formal framework remains surprisingly consistent. The work is rooted in the distinctive lines derived from basic graphics software and favour contrasting irregular or hand-drawn curves, angles and lengths. Compositions accrue layers and an implicit depth rather than related zones or divisions. Standard geometry plays little or no part and colour is in the main, high key and unmodulated, adding to a buoyant, ‘Pop’ feel. 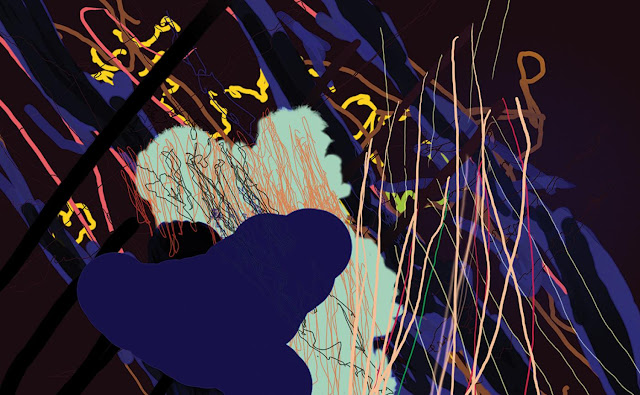 From brittle, jittery lines of exquisite consistency to broad, soft-edged lines of a rounded tip, works trade in a line at once mechanical or remote to touch, and yet random or irregular as reference or derivation. Thin lines can remind one of various scientific graphs or tracings while broader ones suggest other kinds of commercial diagrams and denotation. Combined, we arrive at an intriguing intersection between gesture and process, spontaneity and strategy. The effect however is somehow at odds with itself, at once scattered and carefree yet smooth and slick.

The work is Pop, at Pop’s most abstract, gestural at gesture’s least heartfelt and it is not easy to see how one might sustain such a seemingly narrow project. It is territory that many artists and students were drawn to in the nineties, as graphics software became more widely available, but few stayed long. The best known proponent from that time is probably Albert Oehlen, whose work also rose to an architectural scale and eventually augmented graphics with photography and text and merged it with painting, in an inclusive project somewhat like a latter day Robert Rauschenberg. This assimilation of digital graphics to painting occurs on more restrained terms in the work of Los Angeles artist Monique Prieto from that time, who also began with the distinctive, continuous line (in Corel Painter) to steadily be drawn to text in later work. Other artists pursue more programmatic or computational directions such as Jean-Pierre Hebert’s automated 2-D modelling or Siebren Versteeg's statistical algorithms based on abstraction.

But in general digital options have not been confined to abstraction, largely one supposes because the critical standing for abstraction has faded with Post Modernist agendas and also because software offers far more than mere graphics, integrates not just photography with movies or motion pictures, the graphics and animation that can be part of both but also the sound tracks that then beg accompaniment and these too offer an infinite variety of digital modifications. The sheer breadth of options is largely why the era has become known as the Digital Revolution and rather than dwell on the pictorial fundamentals posed by abstraction, artists have been more intent on exploring the multiple and interlocking platforms now available. 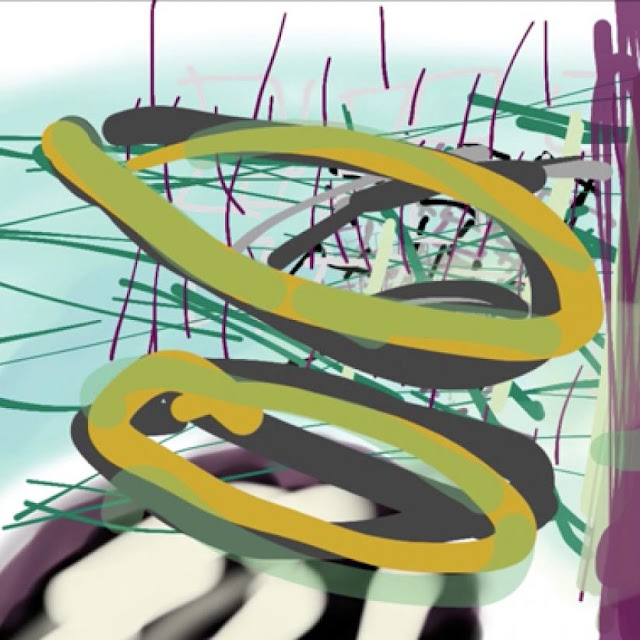 In this respect it is inevitable that Harley too is soon enticed to motion graphics and the current show presents a number of short animations (regrettably untitled or insufficiently differentiated on the screen). But it is telling that they shun sound tracks and remain firmly abstract. There are no texts, no objects or figuration. A camera circles and drifts through layers of blurred or hard edge shapes, many of them animated - appearing and disappearing, as if drawn and erased before our eyes – in a kind of silent white cyber space. But this is only to amplify the strictly formal relations between line and shapes in a time as well as space frame. The artist rightly sees this development as building upon the tradition of experimental abstract motion pictures going back to the nineteen twenties but this too is now something of a lapsed genre. The real question is why Harley finds such satisfaction here and how one might relate it to broader contemporary practices. That is a lot to ask of a local review admittedly, but there is no reason not to at least give it a shot.

The artist began painting medium size abstractions, studied at the RMIT in the early eighties and had his first show at Pinacotheca in 1990. 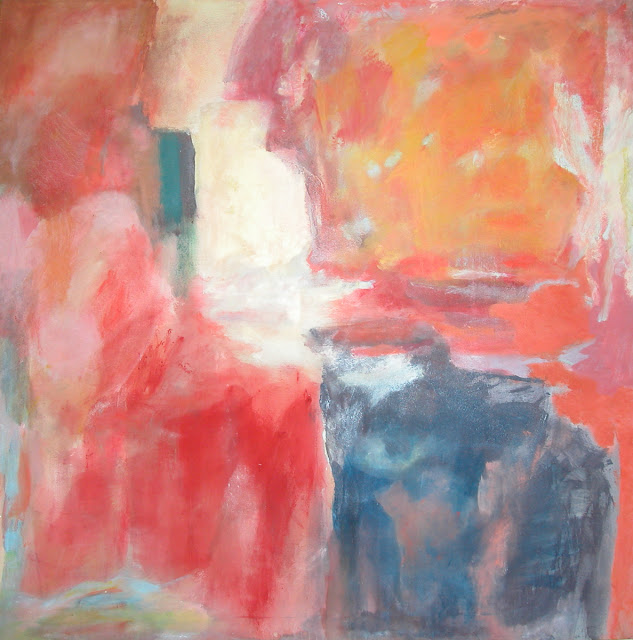 The work dealt in loose colour fields that progressively blurred differences between colour modulation and colour shape so that it tended to grow more Abstract Expressionist in subsequent years, indeed at times hint at figuration. 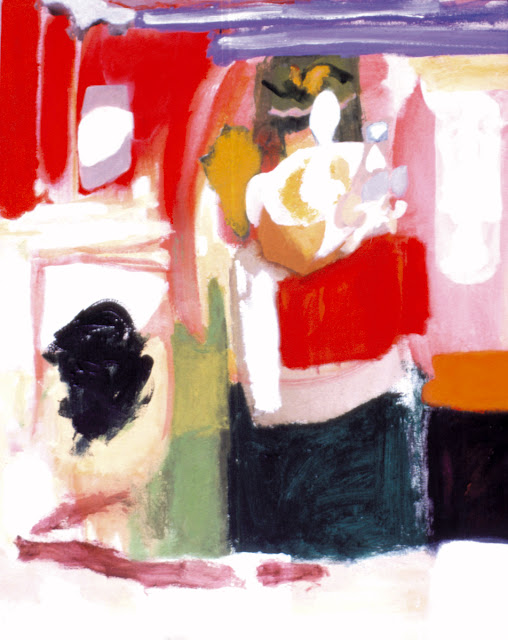 All work is vigorously gestural, stressing not just touch but a serendipitous approach to composition. From the outset Harley had no interest in stripes, grids, nominal monochromes or symmetries. How to then structure a composition proves troubling after a while. It is either too easy, open to endless permutations or essentially arbitrary, undermining issues of facture and colour. There are just too many factors to give the work greater distinction. The range of work from this period (which number in their hundreds) confirms this vacillation. The work unquestionably has a touch, what it lacks is a framework to focus options. It was not until he returned to the RMIT for a master’s degree in 1995 that he was introduced to digital graphics and it took some years before he was confident enough to present digital works. If anything his painting in the meantime continued to diversify its casual structures, to grow more generic.

His first considered digital works occur at the turn of the century and it is immediately noticeable how much more linear his approach has become, once deprived of facture and the temptations of touch and how radically this restructures his compositions. 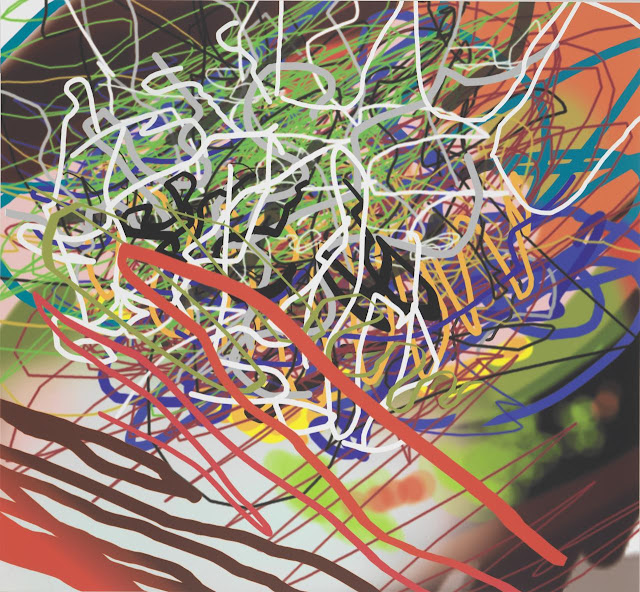 Graphics software in the nineties would certainly have allowed the artist to construct something much closer to his paintings, had he wanted to, but not so directly, not so fixedly. In conversation the artist stressed how he felt freed of this commitment by working on a screen, how less precious his experiments became. At the same time, so many artists when first encountering digital graphics at this time (usually in Adobe Photoshop) were also impressed by linear qualities, some part of the change in Harley’s work must surely be attributed to the prominence of the brush tool in the interface. But where most quickly became bored with the continuous uniform line, for Harley it is precisely this constraint that enables him to then rethink colour and composition. Freed of the commitments of brushwork and the rugged adjustments of colour and shape, the digital work simply works through layers (formidable numbers of them) and contrasts width and edge to line. It is not quite an original development (there are interesting precedents in the work of sixties British painter, Bernard Cohen, for example) but the work does carve out a more focussed, less crowded territory for the artist. 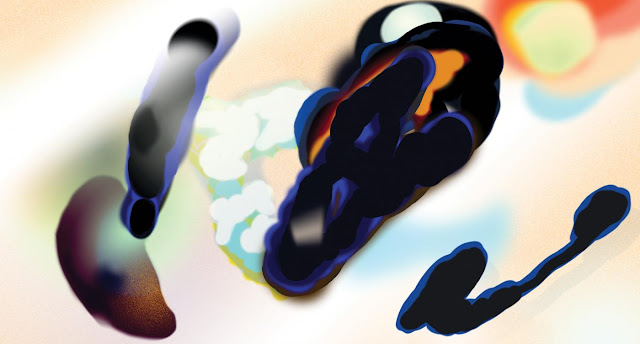 It would be wrong to think Harley was solely motivated by formal concerns of course. Abstraction has its expressive side and what works for the artist, as his remarks intimate, is a more exploratory and reckless line, with which to weave and wander. The artist needs the patient accumulation of efforts, a pooling of lines of enquiry, in which to discern an underlying structure. And something of the artist’s personality is captured in this desultory spreading of means and steady discernment of ends. It is significant in this respect that the artist now goes to great lengths to adjust works to a given site (for this show he even constructed a 3-D model of the gallery in which to consider the selection of works more fully, to adjust them as needed). In sales of works, because of the vulnerable nature of the matt inkjet prints, the artist is also contracted to oversee any future reprints that may prove necessary (the copyright for the file is also sold to the collector). All of this indicates the growing control the artist asserts over the work, in direct proportion to the initial freedom and experiment invested.

This is the return on all those wayward explorations now buried deep in the mix. This provides a vantage point for further judgement and this is what sustains a project where others cannot. The artist still thinks of himself as a painter and occasionally includes site specific murals in his installations. In smaller works painting seamlessly integrates with his digital designs and provides touch as a variant on finish.

The relations or relativity of line have been developed in painting more extensively in the work of Jonathan Lasker (line as field or colour, as shape or gesture) and the later work of Brice Marden (curve in relation to width of line and frame) so that abstraction, having exhausted colour/field modalities still finds surprising scope in looking to less rigidly geometric line. We do not quite return to Paul Klee’s perambulations but the issues of instrument, colour, length width and curve are revisited, now in the wake of Minimalism and Pop Art. If one looks for a broader context for Harley’s work, it not only belongs in this more distinguished company, but usefully expands upon the issues for Post Modern abstraction.

ALL IMAGES COURTESY OF THE ARTIST.
MY GRATITUDE TO CHARLES NODRUM GALLERY AND THE ARTIST FOR HELP IN PREPARING THIS REVIEW.