This Is No Fantasy +Diane Tanzer Gallery

This is a change of gallery for the artist but continues his practice of modest or sparse shows. This one comprised just four large works well spaced around the gallery. All depict abandoned mattresses surrounded by detritus in ambiguous settings, perhaps interior or exterior, the backgrounds rendered in non-committal soft focus. Attention rests firmly on the state of the mattresses, various distress and stains and accompanying refuse, scraps of building materials and shards of glass. The domestic is mixed with the incidental and industrial so that the pile suggests not so much hard waste night in the suburbs as a general clearance, perhaps pacing dispossession or redevelopment. The mattresses take on a disposable, transient aspect, suggesting in turn temporary, possibly furtive sleeping arrangements and at some point a life on the move, riding on a tide of happenstance. A key feature throughout the artist’s career has been urban architecture evoking a lifestyle, reflecting the behaviour of occupants. In the work Oceanic Feeling (2017) it is not just the gentle sliding of planes to the mattresses and the pervasive grey blue palette that suggest a rolling tidal drift, but the great void to the background offering unknown circumstance, expansive possibility. 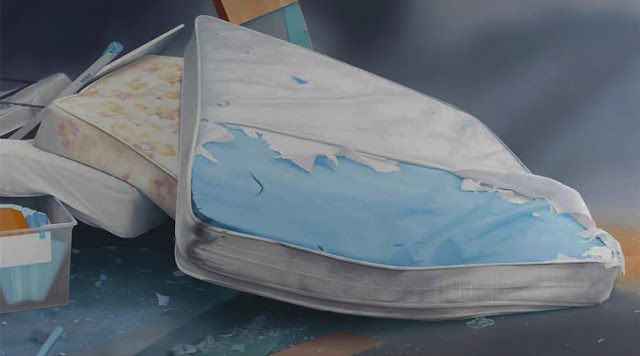 The mattresses carry a close bodily association obviously, so that wear and tear to some degree reflects a restless, possibly careless person. Graffiti, which appears in the other works in the show, such as Secret Travail (Leipzig) (2017) suggests that once abandoned, mattresses perhaps take on other functions for the relentless tagger, even if also the furious dreamer. The show is titled Dream Lovers, (vaguely invoking the pop song Dream Lover, first performed by Bobby Darin in 1959). But the sense here is more of lovers of dreams rather than dreamers of lovers. And dreams are surely what drives such lovers on a nomadic, makeshift existence, keeps them in motion, if not mattresses. 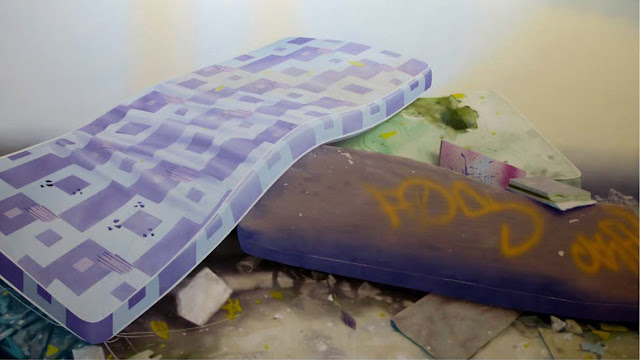 Previously the artist’s work has dealt with unfurnished, flooded and vandalised rooms in modern high-rise buildings. A high-key palette enhanced a remote, science fictional mood while graffiti and dramatic staining to surfaces suggested decay or disuse. For this show the palette has become more low-key and realistic – these are surely the most photo-realistic works he has done so far – and the subtlety extends to the theme of paint, stains and drainage. Here these neatly intersect in the stained surfaces to mattresses, overlaid with sprayed graffiti, in turn echoing the conspicuous air brush technique to the painting. In Street Hassle (Berlin) (2017) the deliberately over-sprayed detail to the left of centre in the composition, results in drips that can be read as both part of the graffiti and underlying stains. Paint is then both form and content and consequently gives painting itself an uncomfortably bodily derivation. 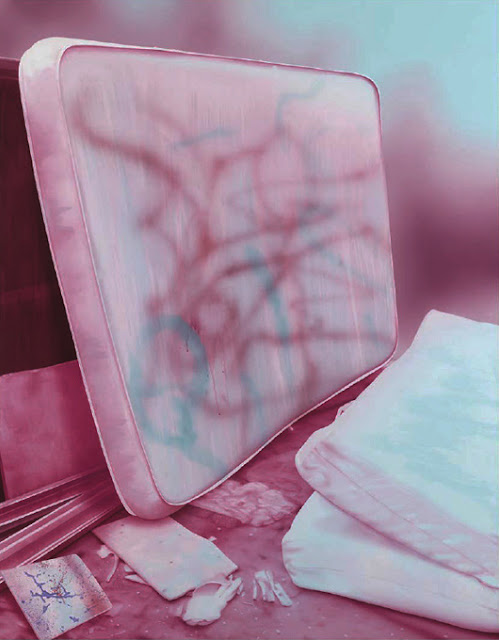 The theme of paint, drainage and defacement or graffiti runs in puzzling counterpoint to the artist’s long interest in contemporary urban architecture. Commentary on the work routinely describes a pairing of utopian ideals with dystopian decline. Yet buildings do not so much crumble as succumb to curious flooding, more often a matter of paint rather than water. In a work such as Transparent Radiation (2012) great cascades of paint pour down inexplicably from the upper levels of the tower (which looks more like an architectural model than an actual building) and defy any plausible function or physics. This surely alerts us to a less literal reading. 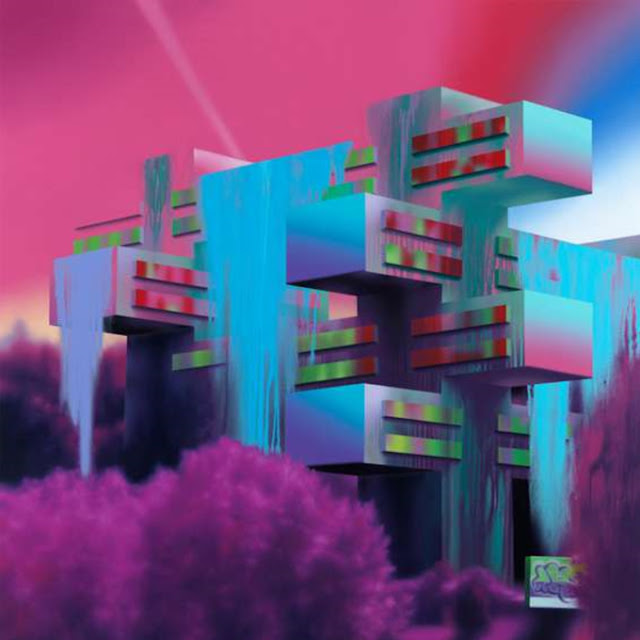 The architecture is not so much threatened by disintegration or entropy as a rival painting technique. One pursues impeccable volume and stability while the other promotes a flowing spectacle of gravity and pigment. While the paint may seem to defeat prim renderings, yet the pictures obviously do not result in pure abstractions. The architecture, while partly erased, holds in check a more sweeping impulse, literally provides structure on a grand and practical scale. It is quite simply structure to live by. Yet it is life paying a price for art. The balance shapes as the excitement of paint and art against the somewhat sterile conditions of living. In an interior such as Moral Hazard (2009) the whole panorama through the full length windows explodes in an ominous red, while inside paint not only flows along surfaces or planes but significantly is saluted in the Lichtenstein-like painting of a brushstroke on the wall to the left. 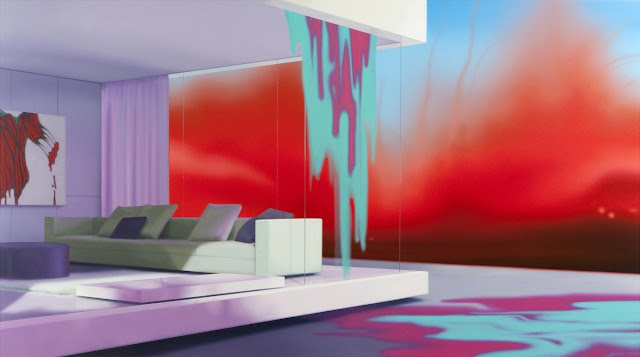 The allusion is complex, since the Lichtenstein reduces a spontaneous Abstract Expressionist gesture to a dry graphic while Wardle’s air brush technique similarly illustrates poured paint as well as more diffuse volumes. Paint has more than one flow or motion, is really the message and nothing stays fresh for long. Excitement rests with variety. Life is not so much at a remove or retreat from art under this arrangement but rather a way of redirecting the flow, never entirely efficiently or predictably, but providing at least some pause or comfort. While a simple duality between the utopian and dystopian is a little wide of the mark as interpretation, there is all the same, a marked switching between paint and place, form and content, art and life. It is, by any measure, a novel and striking aesthetic and in the current show the artist’s airbrush technique carries this forward to new nuances of form and meaning. The pictures are more focussed, more conventionally realistic while remaining the selective demonstrations of paint at its flightiest.

Earlier works also flourished graffiti as painterly effacement with a more articulate message but these too eventually run away with gravity, as in Neighbourhood Watch (2016). 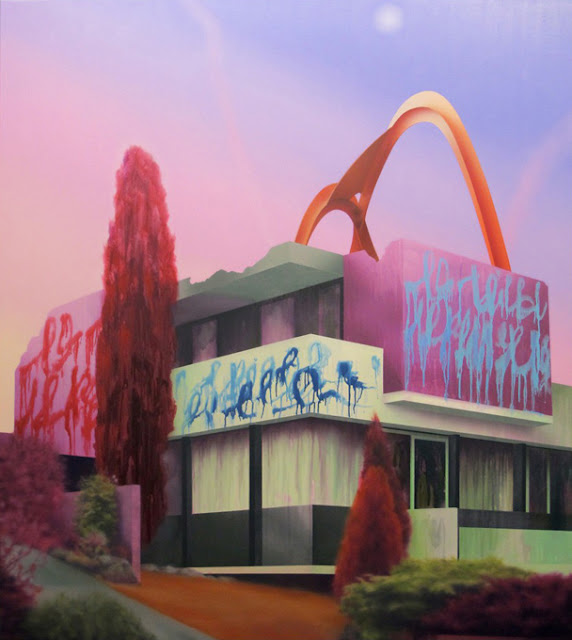 For all Wardle’s distinctive formal concerns, the work nonetheless sits comfortably with a pervasive strain to Post Modernism in its attention to urban architecture, vandalism, desolation and stylistic pastiche. It is very much a global movement. The artist’s starting point however was much earlier, with the work of Edward Ruscha, which he first encountered in a career survey at the Museum of Contemporary Art, Los Angles in 1991. This encouraged him to see the Australian landscape in terms of its suburbia and Ruscha’s cool, technical approach (including airbrush) eventually suggested severely stylised and symmetrical motifs generated in Photoshop and then laboriously painted at the end of the century. These gain Wardle his first recognition. 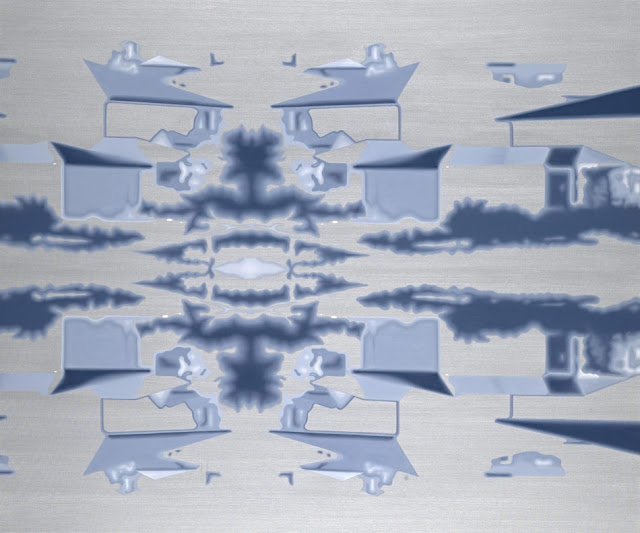 Works such as Winter Tech (2001) attest to a strong formal concern but further travels to Los Angeles and New York in the early years of the new century soon suggested more elaborate and urban content. At this time New Leipzig School artists such as David Snell and Martin Kobe also dealt prominently in urban architecture while British artist Nigel Cooke introduced comic Modernist ruins, graffiti and droll pastiche to elaborate dystopian scenes. In fact Wardle attended Cooke’s breakthrough show in 2004 at Andrea Rosen, New York several times and freely admits to its influence. Meanwhile, Dresden artists Thomas Scheibitz and Eberhard Haverkost also achieved greater exposure with work devoted to urban architectural themes around the same time so that there is a groundswell of interest at various places around the globe by the middle of the first decade.

Wardell advanced cautiously. A work such as Redondo Poolside (2004) is still quite abstract but significantly introduces a water element to the foreground. 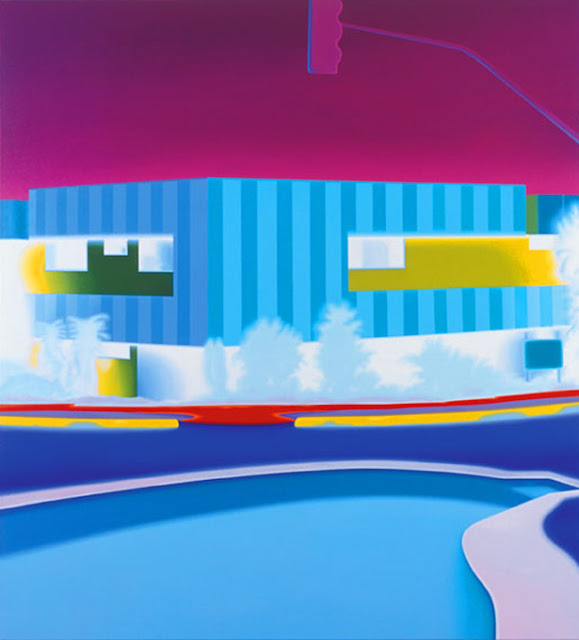 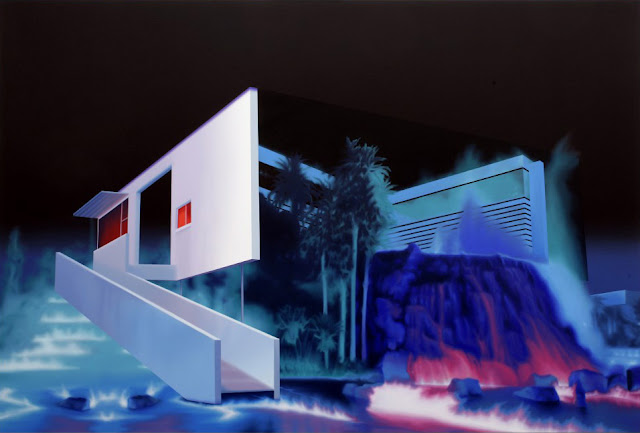 Subsequent work concentrates on more precarious or abstract pictorial construction before introducing graffiti and seepage in works such as Tipping Point (2008). 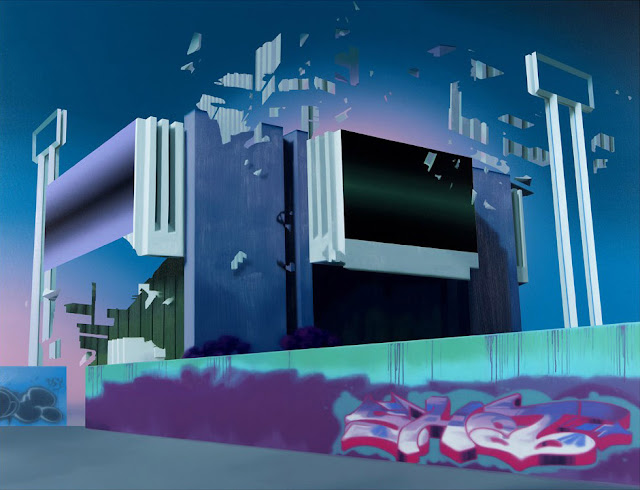 Treatments of the theme then grow more elaborate. It must be conceded that the current work owes something to Ruscha’s Metro Mattresses of 2015, but for Wardle discarded mattresses are pregnant with context, while for Ruscha they are stripped of function. A more unexpected direction was disclosed in 2009 when the artist commenced a series of injured heads or faces, titled Head Case. Apart from literal examples of defacement, it is difficult to find a connection with his architectural work. Evidence of outpouring or graffiti, as makeup or bleeding, say, regrettably do not arise. At most, one notes how the injuries obscure or modify identity, at times amount to a mask or scaffolding, in other cases provide protection or padding, much as a mattress might. 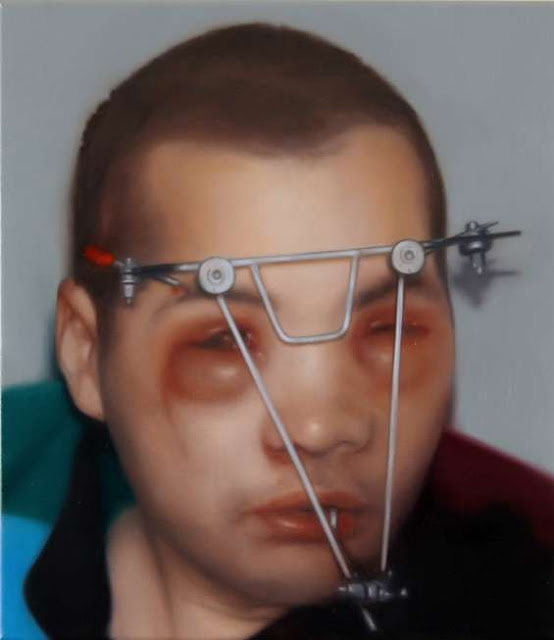 After spending so long detecting character of people among buildings, one supposes the artist eventually grew curious to see more of them, only to discover their identity was by no means straightforward. Head Case advances his inclination to realism and Wardle has continued to work on the series off and on, most recently adding to it in 2014. In terms of underlying theme, the series would seem to establish that facial distress at least cannot be measured in paint or a flow, but rather cedes this to photography and can only soften the focus slightly, recalling Gerhard Richter. But here an airbrush merely declares the flow restricted to this much, says something very different from Richter’s brushier approach. In conversation the artist seemed uncertain how to proceed from this series, but if Dream Lovers hints at a dispossessed, possibly fugitive figure, Head Case confirms their status as victims in an arch and elusive world. 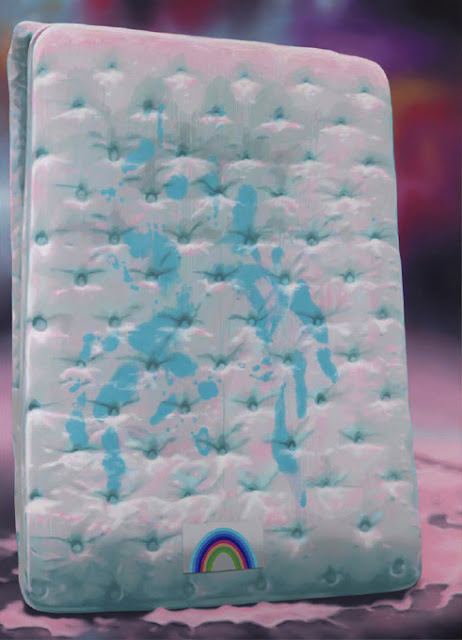 All images courtesy of the artist and This Is No Fantasy + Diane Tanzer Gallery.
My gratitude to both for assistance in preparing this review.