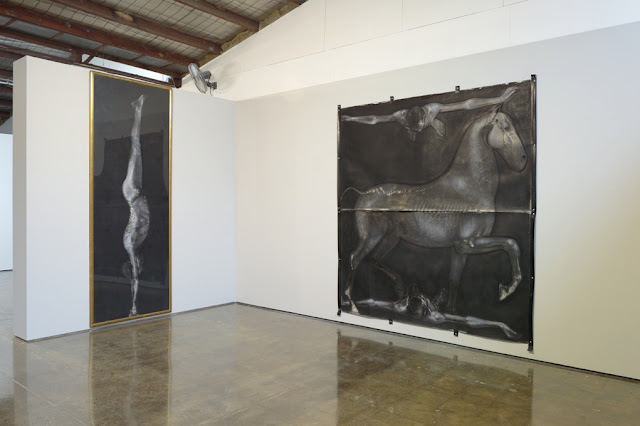 
The show comprises twelve, mostly large drawings in the artist’s characteristic mix of chinagraph, silver oxide and pastel on paper, notable on this occasion for the inclusion of mythic and literary beasts together with his familiar nudes in stark isolation. The show is titled Beasts, bundling together animal poise and vulnerability from across the artist’s long career in a reprise of favoured themes. There is a very dark Tyger, Tyger from 1988 alluding to the poem by William Blake, an enormous prancing steed from 1990 - Terribilita– the term for awe prompted by Michelangelo’s works among his admirers, an Ouroboros – a serpent eating its own tail – an ancient symbol for cyclical existence, a charging bull in a triptych, redolent in allusions to Minoan myth, perhaps by way of Spain and local utilities companies. In the second room, a template of a mischievous monkey is applied directly to the wall, repeatedly, reviving a skeletal motif from the mid nineties. Metaphor lurks, as always with the artist, obliquely. Other works date from as far back as 1980 and serve to underline a resolute consistency to theme and technique. While the artist remains content with a fairly narrow range, over the years the work has cautiously allowed greater flexibility to gesture and finesse to modelling. 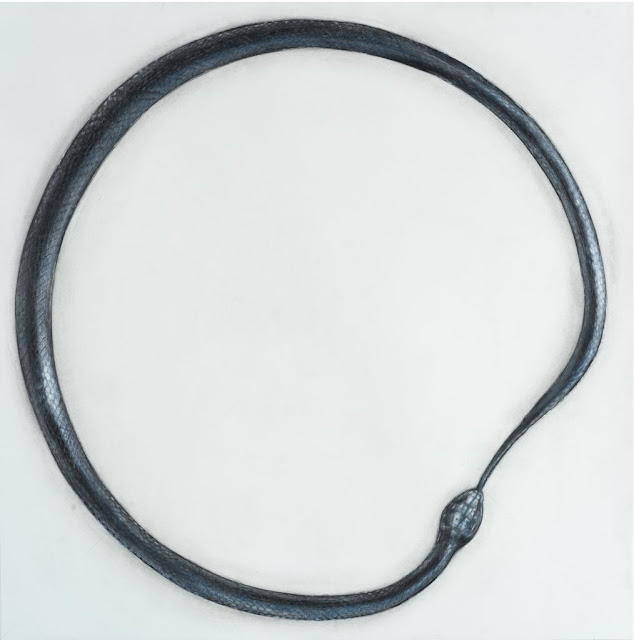 
The show follows the publication last year of a substantial monograph by Janet McKenzie and Kenneth Wach and consolidates a quiet but distinguished reputation. The work pursues an essentially Surrealist aesthetic, inherited firstly through the solarised photography of Man Ray, a source for a distinct linear style, later the stark isolation to a standard or traditional figure found in the painting of Francis Bacon and Alberto Giacometti, in which any kind of measure or ideal is rendered absurd or self-serving. The figure is never truly at home or at rest, understanding is at best temporary or fragmentary. These are the staple to post-war existentialism really. Even the skeletal foundations to much of Bradbeer’s early work share this suspicion for orderly construction, toy with correspondence, much as Muybridge’s patient photographic studies of ‘the model’ remained an enduring amusement for the Surrealists. There was no rehearsal in life. Foundations were finally without foundation. Even the chance fluctuations in chemistry and facture as Bradbeer burnishes and abrades his surfaces recall the Surrealist’s faith in accident and the unconscious. 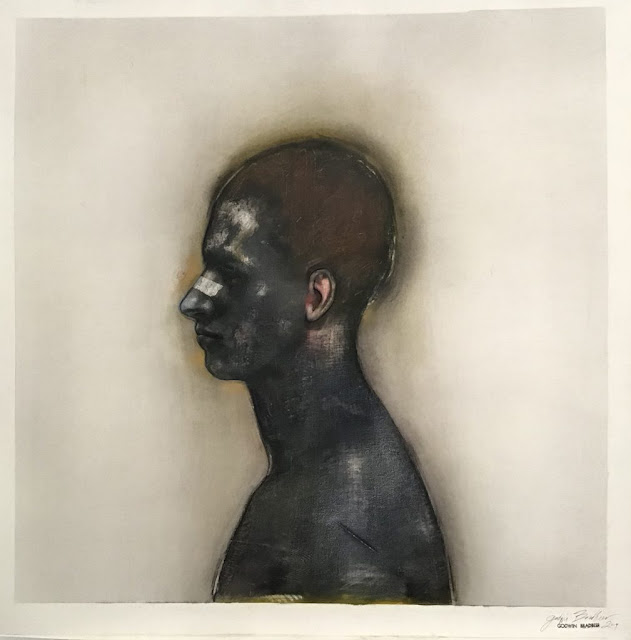 Yet the sheer scale and distinctive materials also give the work a Post Modernist feel, a sense of revisiting Surrealist concerns at one remove, of directing them to other ends. The work properly emerged in the early eighties, in the wake of Neo Expressionism and coincides with an interest in large-scale drawing as a route back into figuration, avoiding all the issues of painting dwelt upon in abstraction. The New York ‘Pictures’ group from 1977 into the eighties for example featured large photo-based drawings by Troy Brauntuch and Robert Longo while Transavantgarde artists such as Enzo Cucchi are notable exponents of wall-sized drawings at this time. In Melbourne, artists as varied as Bernard Sachs and John Wolseley engaged with historical and geographical imagery from the confines of the much expanded sketch, of just line and tone. In this context, Bradbeer’s work strikes a note of firm resistance to the primitive schemas of Neo-Expressionism, to laboured allegory and rhetoric in iconography, to clumsy and hackneyed technique. The work, while rivalling contemporary approaches in drawing, acquires a new restraint, a more conservative, detached attitude. 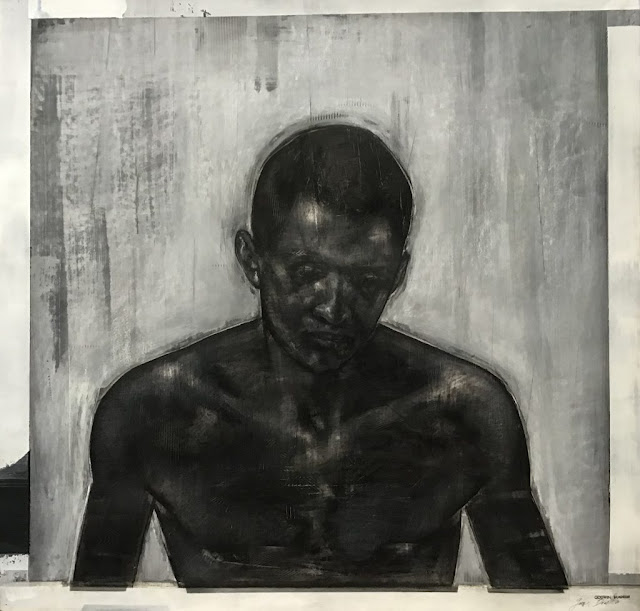 Post Modernism soon allows older, Pre-Modernist allusion as it succeeds Neo-Expressionism, revels in pastiche and parody and threatens to strand Bradbeer’s position as not conservative enough. Except that Bradbeer’s rendering has not been entirely traditional in any case. While maintaining something like classical proportion and modelling to the figure, the artist’s attention to volume and surface brings with it a heightened emphasis upon highlights – prominent gleams or sheens – that in themselves are properly a photographic trait. Together with the smoothed contours and simplified features to his figures, these do not just freeze a pose in rigid clarity, but effectively turn the figure into a sculpture, so that the work becomes more a drawing of a sculpture of a figure. 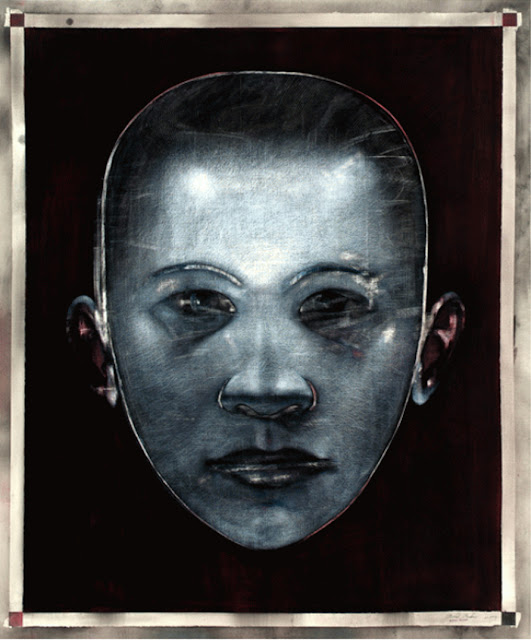 Imago-Domino (2009) 176 x 154 cm chinagraph, silver oxide and pastel on paper [NOT IN SHOW]
This double distancing is very much a Post Modernist taste, a need to acknowledge a chain of reference rather than assume access to an exclusive ‘natural’ subject. In this, Bradbeer’s work straddles the divide between Late Surrealism and Early Post Modernism and earns a place in our recent art history.

This aspect is particularly prominent in the series of gleaming heads produced over the first decade of the millennium, such as Imago-Domino (2009) where the sense of a sculpture or mask clearly outweighs consideration of merely a drawing of a person. In the current show this aspect is less pronounced, but works such as Europa (2019) maintain a gleaming fixity and isolation that still recalls sculpture. 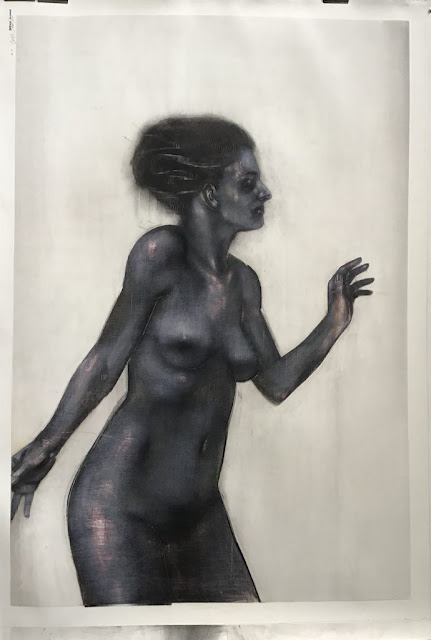 
This detachment brings with it several other features that sharpen the artist’s address, anchor detachment against vigorous involvement. There is firstly the heavy, even outline that perhaps owes more to the artist’s experiments with solarised photography (after Man Ray) than traditional life drawing. Its function is really to signal a level of simplification or stylisation to the figure, to flag a generic or non-specific person. Equally, this emphatic outline marks the border between figure and ground – not even background – merely pictorial vacuum. This too marks an advance on Bacon or Giacometti’s notional interiors. For Bradbeer, though the figure is modelled by an interior ‘hard’ light in the interests of striking volume and highlights, it remains indifferent to further circumstance. There is only the figure in mysterious isolation. Then there is the artist’s distinctive approach to tonal modelling based upon a ground of white chinagraph burnished with silver oxide and worked through successive layers of pigment dust. This novel process is detailed in most commentary on the artist’s work (see resources below) and here is of interest for the integration of gesture with chemistry to pigment. The artist’s efforts carry through to a striking physical transformation; establish a profound connection not only with the figure but the business of rendering itself.
Such depth of commitment is pointedly ambivalent however and successive adjustments as often abrade and distress the surface - by extension the figure - in a troubling oscillation. Works such as Portrait Point Blank (2019) resort to a fine saw blade with which to incise the work with curious scallops on the left of the figure, less an indication of volume than calculated defacement, an inflicted wear and tear to the artist’s judgement. The work is thus also about being naked on this more intimate, private level. 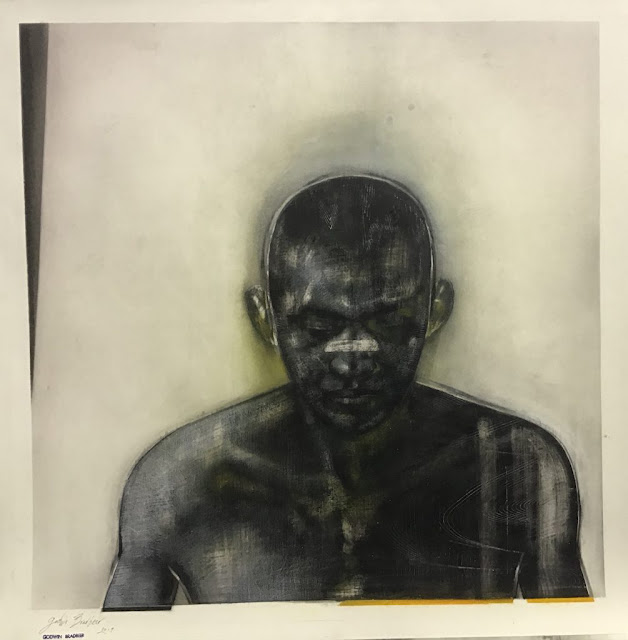 Portrait Point Blank (2019) 86 X 85 cm chinagraph, silver oxide and pastel on paper
This headlong involvement, as noted, is the flipside of an equally concerted detachment. The work stresses detachment not just by opposition to contemporary trends, but in the elaborate framing devices that develop from masked borders to successive stages for a work. In Portrait Point Blank (2019) these allow the base of the figure to overhang its background slightly, further flattening and distancing the figure’s situation. The most conspicuous example in the current show is surely Bull (2019) where the borders between the three panels to the triptych reveal stages involving a surprising amount of red pigment and inevitably suggest blood and slaughter. Interestingly, supplicating hands around the bull beg that vital connection of touch to the beast and its work.


The balance between vigorous involvement and reflective detachment is a delicate, possibly timely matter. The artist’s preference for working on large sheets of paper brings with it a special frailty to sundry heavy re-workings and part of their impact is literally registered in the bulging surfaces and ragged edges of the support. Understandably, many works are framed and under glass as a preservative measure as well as a final step in detachment. But undeniably, the raw, loose presentation of works such as Fall –Torn (1981) and Terribilita (1990) carry a greater expressive charge. The work never seemed more naked or brazen, never less concerned with grand tradition or surroundings. 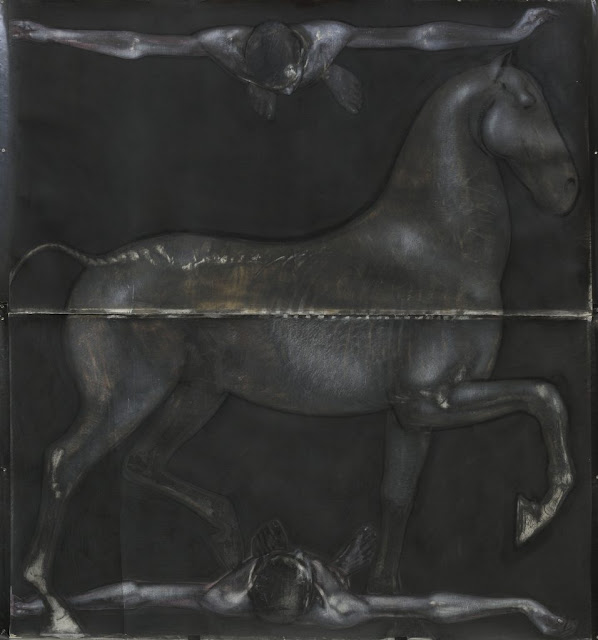 Terribilita (1990) 268 X 245 cm chinagraph, silver oxide and pastel on paper
Finally, the pairing of figures with beasts obviously prompts a shared vitality, although for much of Bradbeer’s career the two have provided almost opposing reference. Beasts, as listed above, easily allude to ancient myth and metaphor while figures generally suppress precisely this extension. Figures have aimed for something more inward, more psychological; perhaps spiritual. Yet, just as the work has occasionally ceded costume to figures and with that cues for roles or interaction, with the current show a female nude is identified as Europa (2019). It is her gestures that are relayed around Bull (2019). The work thus further relaxes the austerities of personality, resistance to greater circumstance.
The artist in his sixty-ninth year contemplates what further concessions his project might allow, while Post Modernism has also moved on, less concerned with a forlorn ontology of painting or traditional resources than the genres that now proliferate in the digital world. It is a rich and intriguing prospect for both.

ALL IMAGES COURTESY OF THE ARTIST AND JAMES MAKIN GALLERY

MY THANKS TO BOTH FOR HELP IN PREPARING THIS REVIEW