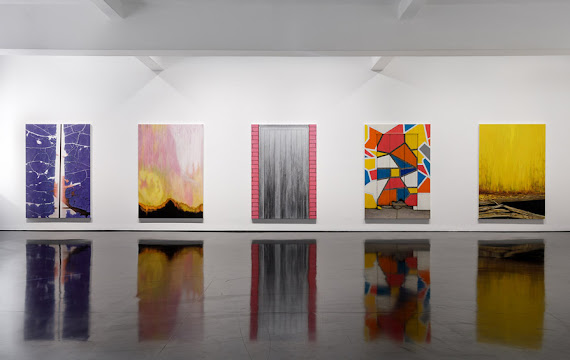 Installation view
After the high drama of the artist’s 2018 show, ‘Spill’, with its towering white cascades into abject darkness, ‘Shoegazer 2.0’ finds him in deliberately quieter, more modest form, more upbeat mood.
The work nevertheless maintains abiding themes of decay, distance and disclosure but now framed in architectural settings, devoid of obvious figures, with a palette tilted to pinks, orange and yellow and a strict frontality to composition. The wry title Shoegazer alludes to a brand of nineties rock in which musicians supposedly averted their gaze from the audience and eschewed greater showmanship, preferring to concentrate upon their playing (or footwear). Here the label flags a similar mock self-effacement, with the artist’s gaze initially confined to small areas of pavement under foot, featuring cracks, filling and sundry stains in the eponymous triptych and the show’s sole print. The 2.0 in the show’s title acknowledges an online version at the gallery last year during lockdown. 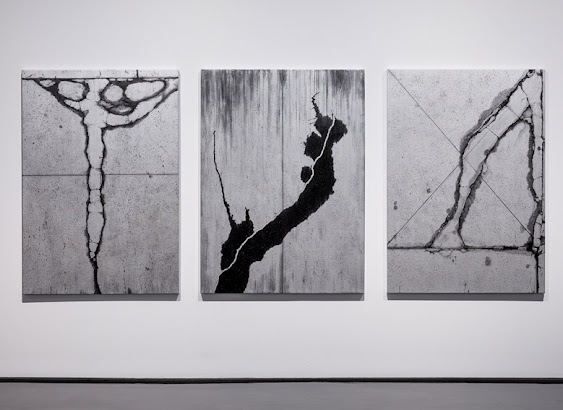 ‘Shoegazer’ (2021) overall size, 152.5 X 355.5 cm oil, flashe, alkyd & aluminium pigment on linen
Yet Browne’s renderings are anything but straightforward. The triptych ‘Shoegazer’ uses a metallic pigment for the concrete surface, instantly distancing a literal reading of the cracks and stains, prompting a more abstracted or stylised function as figures to the ground in ragged outline, perhaps teased in an almost religious ecstasy by the triptych format. Francis Bacon fans look away now.

Figures are a recent and cautious development in the artist’s work, to what is essentially a landscape project. Even while playful, these add to the psychological undercurrent. The silvery ground recurs in other works in the show, giving surfaces an impervious, resolute quality, contrasting with notional distress or legibility. This sense of resistance or protection is reinforced by imagery of walls, windows and doors elsewhere in the show, presented up close or in a shallow foreground, upon which the rot has set in; wear and tear takes its toll. 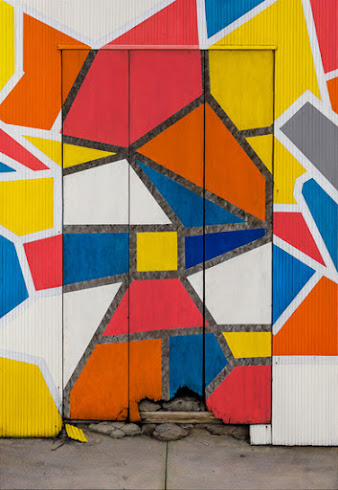 'Rockaway' (2021) 191 X 132 cm oil and alkyd on linen
In ‘Rockaway’ (2021) a cheerful geometric pattern (mischievously recalling modish irregular tiling, much favoured in the city’s recent architecture) decorates an exterior while declaring a trompe l’oeil between abstraction and figuration, appearance and essence. While the title locates the subject in Queens, New York City, the issues are plainly much broader. The first is whether painting actually does more than a photograph might, by such a composition? And to this the artist is happy to point to the many adjustments to his source photographs, much as digital photography now routinely edits files and the elaborate materials and techniques enlisted for his painting’s subtle and ingenious effects. But these are really the last hostages to a Modernism of ruthless purity and austere independence of medium. A more familiar and radical defence simply disregards the need for painting to observe such boundaries to pictures and instead insists upon merely its connectivity or context. Painting is but a means to a compelling picture. The medium is not necessarily the message. In this respect ‘Rockaway’ rehearses the departure of Modernism for Post Modernism, a shop-worn formalism concealing too much, a day at the beach gone begging.

Photo-realism, an earlier historical episode, has a slightly different aim in exploiting camera and print properties in ways only painting can, particularly for recognised genres. These need not concern us here, but the practice is distinct from Browne’s approach. His imagery rarely acknowledges a public domain or genre and until now has mostly been directed toward details of overgrowth, neglect and detritus particularly around water courses. The artist readily allows these concerns stake out an urban periphery or wasteland and the present show offers some advance on that, even if it is only to closed doors, veiled window frames. 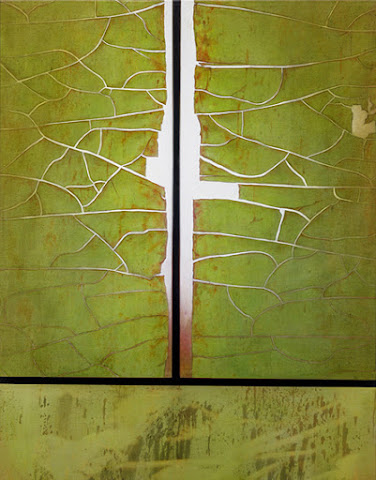 ‘The Crack (Green & Red)’ (2021) 52.5 X 119.5 cm oil, alkyd and aluminium pigment on linen
The organic sense to decay persists, notably in ‘The Crack (Green & Red)’ where the peeling cracks to a blind or curtain resemble veins in a leaf, these set against the black bars of a window, again hinting at concealed depth, a brighter world beyond. This work especially chimes with the quote from Leonard Cohen on the gallery’s website.

‘There’s a crack, a crack in everything,
That’s how the light gets in’

Light has previously been a far more prominent feature of the artist’s world, notably in determining crucial recognition to nocturnal scenes. The artist’s early work proceeds from abstraction throughout the eighties introducing a flare to white shapes that unmistakably assumes a photographic quality in a work such as ‘Staring At The Sun’ (1988) 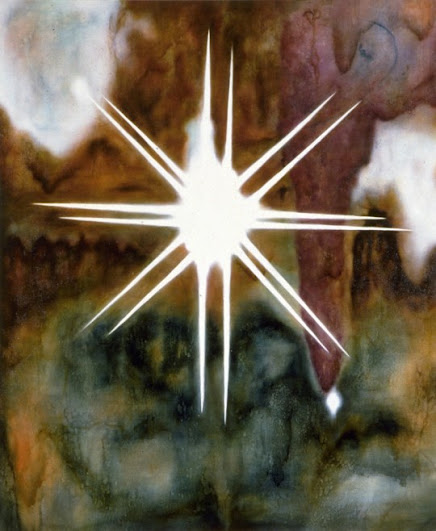 ‘Staring At The Sun’ (1988) 183 X 153 cm oil on linen [NOT IN SHOW]
Here a light source is now part of a scene and surrounding objects are rendered tentative, mysterious and ultimately remote under conditions of unexpected illumination. This early phase culminates in the buoyant ‘Sfumato Nocturne with White Wholes’ (1991) now in the NGV collection and in part inspired by televised coverage of the Desert Storm invasion of Iraq, a rare concession to the public domain by the artist. But for the most part the artist’s flickering nocturnes dwell upon motion or traffic and trees, the world of nature glimpsed at some dim and fleeting remove. 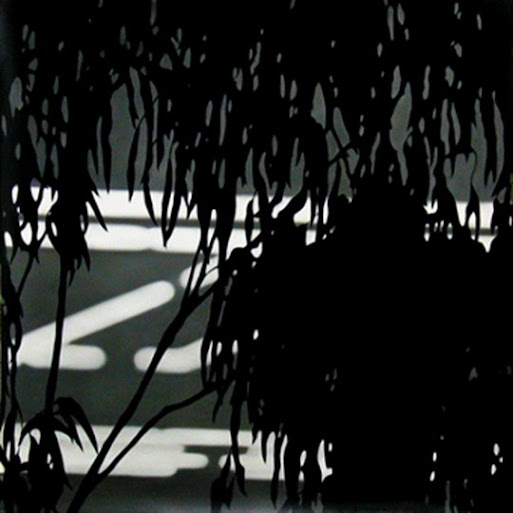 ‘Fringe of Leaves and Lighting’ (2002) 113 X 133 cm oil on prepared paper [NOT IN SHOW]
At a psychological level, the view registers as one of alienation, a deep reluctance to greater engagement. This sense of gloomy withdrawal gradually abates however, somewhere around 2009-10 when the artist then allows daylight to examine the detritus and overgrowth surrounding urban water courses. These are the artist’s most expansive and detailed works, developing photographic sources into an intensely linear style, reducing tangles of roots and creepers to a smooth spaghetti or string-like intricacy. The vast ‘A Riverbank, Culvert, Detritus and Apparitions’ (2012) 130 X 900 cm oil on linen is a prime example. A myriad of minor entanglements might be the message, for the man finally drawn toward the light. 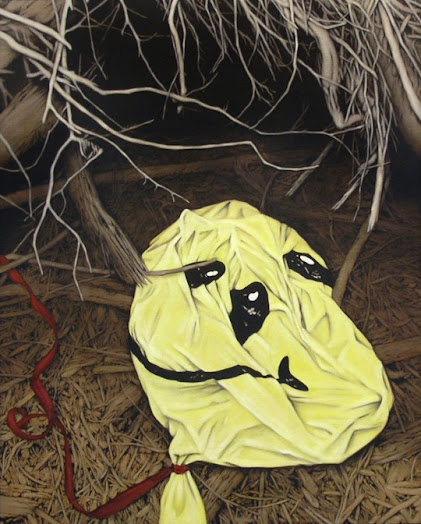 ‘Untitled – After Deflated’ (2011) 101 X 81 oil on linen [NOT IN SHOW]
Other works from this time introduce token or surrogate figures, again signalling an uneasy emotional tone to the landscape. The role of water throughout these works surely suggests a psychological metaphor as well, one that would seem to have culminated with ‘Spill’ although water remains a motif to several works in the current show. 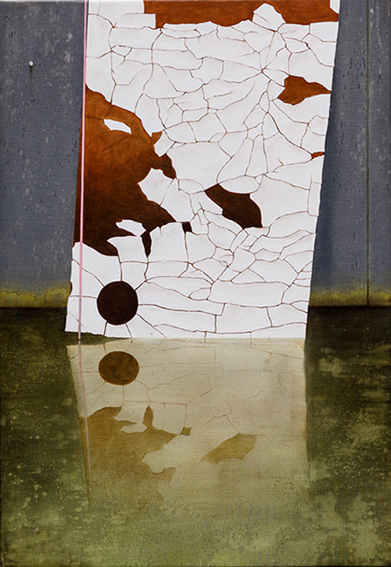 ‘Gipps Reflection’ (2021) 92 X 64 cm oil and alkyd on linen
Browne’s development occurred as part of an international swing away from abstraction in painting, as well as the blunt rhetoric of Neo Expressionism, to something more sophisticated, less dogmatic and obvious. Much of Post Modern figuration embraces a knowing eclecticism, plundering Pre-Modern styles, revelling in literary and allegorical reference. In this company Browne stands so far apart it is doubtful he even belongs within the style.

Like any number of painters of the era, here and overseas, he derived forms or techniques from photography, but in his case remained largely indifferent to genres in which they arose. Instead, he cultivated stark illumination sources as novel means to re-orientate a scene by night, to create a compelling distance to point of view, beyond focus or depth of field. It was this marginal perspective that eventually suggested certain wasteland landscapes viewed in broad daylight. The transition was also from rendering by light to rendering by line, and this is such a peculiar and unexpected change, some overlook the psychological aspect. The work gains greater focus or legibility at the cost of a certain rigidity or immobility. The sense is subtly of entrapment. In this regard the current show is interesting for the greater attention to formalist structure or stricture, to the frontality and symmetry to compositions, with nods to colour field and gesture. 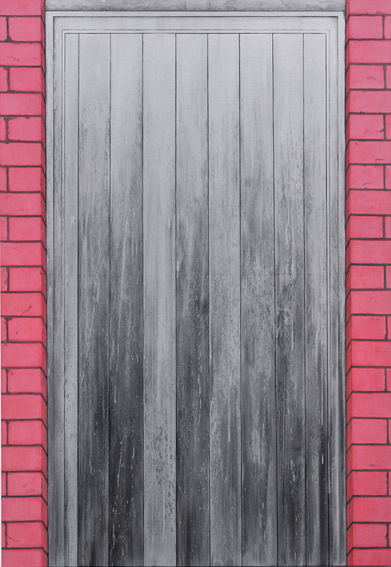 ‘Silvers & Pinks’ (2021) 191 X 132 cm oil, alkyd and aluminium pigment on linen
Having edged its way in from the margins, the work now pauses before a forlorn heritage. Note that light source is now virtually negligible; line is at its most regimented. What this bodes for future development is intriguing. While a stint of shoegazing may have been in order following ‘Spill’, the prospects here are perhaps a little too confining, a little too close for comfort. The artist has pursued one plank to his project in genial solitude, but one senses others will soon beckon. And he is to be commended for refusing to rest upon prior achievements, for continuing to explore.
The works inflect upon what has gone before; offer an altogether drier, more measured account of a world distanced by formalism, of formalism distanced by the world. The pictures are fascinated by the interplay; in a realism that channels abstraction and vice versa. There are options on both sides of the ledger here, in painting and photography for more of this, but Browne is anything but programmatic in his inspiration. Having contemplated a wasteland at length, its thrills and spills in fluid remove, it may be time to consider more central pursuits. The show may prove a watershed
. 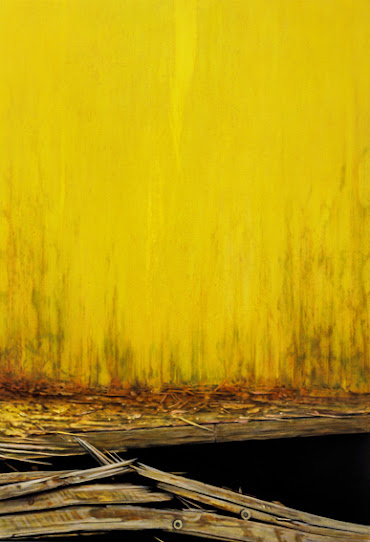 ALL IMAGES COURTESY OF THE ARTIST AND TOLARNO GALLERIES
My thanks to both for help in preparing this review.