A show of nineteen digital prints, available in two sizes, (70 X 46 cm and 46 X 30.5 cm, editions of five), announced the artist’s move into digital graphics. Trained as a photographer at the VCA (1998) and completing a masters there in 2017, she was previously noted for brooding portraits in extreme chiaroscuro, elsewhere dark, ambiguous surfaces and at other times video and installations pursuing these interests. To these one can also add her participation in the all-female pop group, Beaches. The title for the Koenig show, Polytechnic, flags this versatility while funnelling her interest in found materials into surprisingly formal tableau. Initially the pictures read as sober assemblies, a kind of studio exercise in composition but the game is really in their identity as sheets of coloured and folded paper, wooden blocks of a certain scale and shadows of an uncertain angle and diffusion. 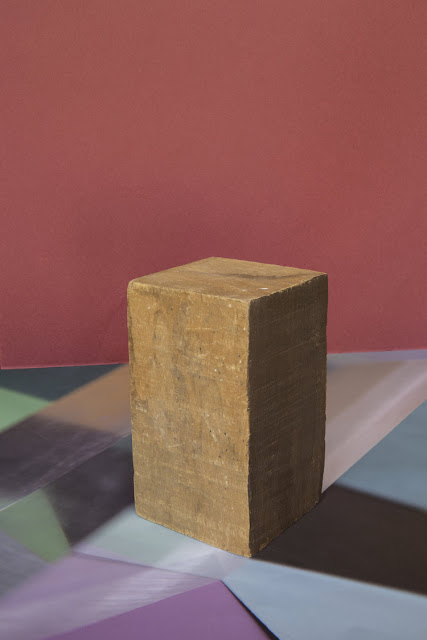 The works are notably restrained, concerned with the placement of an obvious volume within an ambiguous or problematic plane, and although suggesting basic Photoshop compositing, are actually ingenious tableaux involving the placement of prints of previous versions of the composition or similar as a base or support. Despite the difference in technique, the results are surprisingly similar. In Figure #9 for example, shadow does not match up with the wooden block, nor is focus or depth-of-field consistent across the supporting plane. Realism or even a convincing fantasy is plainly not the goal. The work teases at a consistency or coherence to a three dimensional rendering, that might recall Surrealism or perhaps its metaphysical precursors in the work of Giorgio De Chirico or Carlo Carra, but on terms that are now entirely the property of the digital age, with the added ease of photographic printing. The aim is not so much a philosophical conundrum or a disturbing departure from pictorial norms, as a measured attenuation of pictorial properties for a range of related objects. The work is a deconstruction rather than a Modernist reconstruction, a quiet but rigorous catalogue of depth, proportion and shape identities. 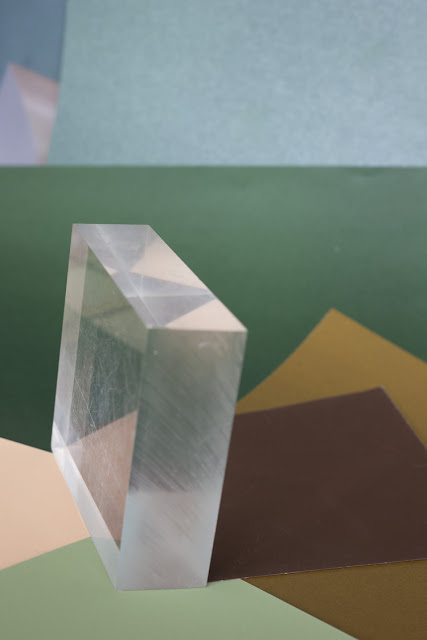 In Figure #1 the foreground edge to what at first glance would appear a brown shadow is given a distinct thickness and roughed edge, as cut paper, with a delicate drop shadow, all cancelling any plausible function as shadow to the white frame, which may have a window or mirror mounted on the left side. Yet how realistic are we to take any of the arrangement? On what level does pictorial consistency need to operate? We are not dealing with a familiar object (even though a plausibly concrete one) or a situation of any greater consequence. The folds to the top of the white frame perhaps declare its identity as a repurposed photograph, but so much argues with a convincing illusion, at best one appeals to unusual properties or circumstances for such a frame. We are in a realm every bit as hypothetical as a De Chirico but shorn of nagging clues to time and place the concern narrows to identity of object as volume or plane, on a generally small or intimate scale, with qualities of light as colour and surface played against focus.  It is these delicate matters of consistency that provide the artist with a range of formal elements with which to construct her modest but deceptively complex tableaux.

More abstract compositing has generally taken the route of more elaborate fictions or illusions, combining and merging improbable, at times paradoxical objects. McCann’s work stands in stark contrast to such practice. Perhaps the most telling comparison would be with Thomas Ruff’s imposing Photograms series of 2012-14, constructed in a 3-D modelling programme as a massive virtual darkroom with an array of geometric objects in degrees of transparency and overlap with one another as well as nominal light sources. Files took up to a year to construct and ran to a staggering sixteen terabytes for a single image. Little wonder the artist resorted to a super-computer for rendering. McCann’s project, needless to say, occupies the other end of the technological spectrum, but nevertheless shares an underlying concern with three-dimensional rendering pursued as an end-in-itself or an abstraction. 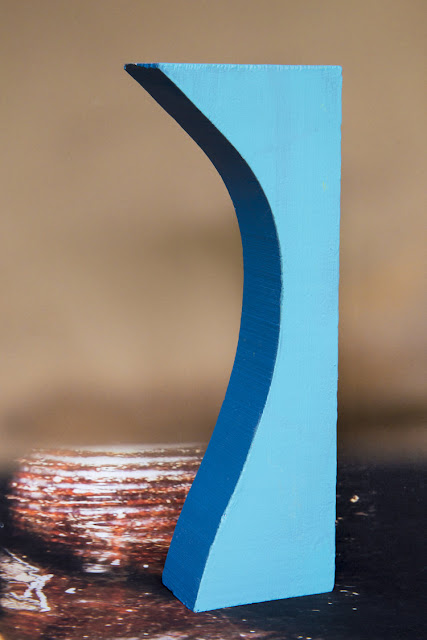 We think of pictorial abstraction as declaring a naked two-dimensionality, establishing a basis for pictures against rival schemes for notation and pattern or geometry. But since two-dimensionality is really of most interest for pictures where it supports the rendering of three-dimensional objects, abstraction might equally be pursued through the many conventions that support such objects and their relations in standard practice.

Under this more conventionalised view, photography naturally assumes prominence and the means of isolating or dismantling its conventions take on greater precision with the advent of digital technology. Compositing allows far greater manipulation than mere photomontage for example. 3-D modelling programmes enable still greater intervention - as Ruff amply demonstrates - in matters of surface, lighting, focus, scale and even motion. What Polytechnic lacks in spectacle or pyrotechnics in comparison with a Ruff, it makes up for in subtlety and serenity. Abstraction on these terms is less a battle of ‘flatness’ or a misplaced sense of opticality than one of coherence or continuity with photographic practice. 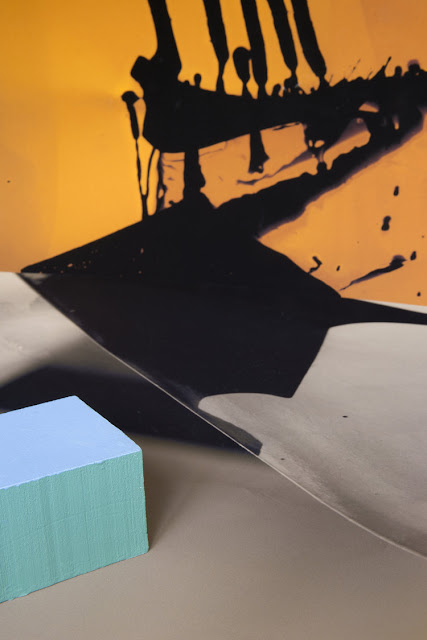 In a work such as Figure #13 McCall can allude to an earlier mode of abstraction, to a priority to the painterly, but in general Polytechnic shuns this kind of Post Modern reflexivity in favour of more hermetic arrangements. At most, upright elements might vaguely denote a figure claiming ‘its own space’. A more expressive or personal meaning may then rest upon the attention given to the precarious foundations for such a stance, a nagging insecurity 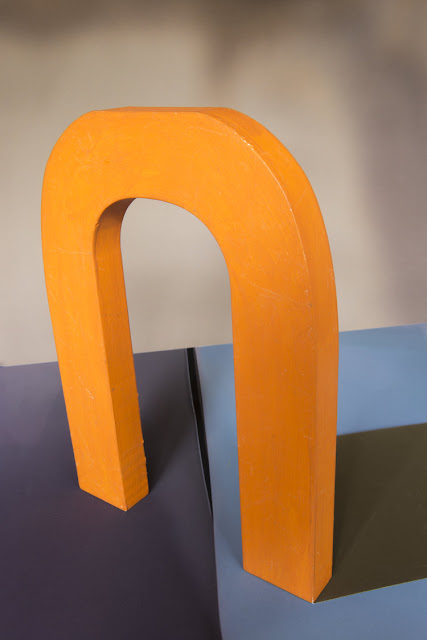 A more evident feature is the subdued palette with its warm light blues, oranges through to golds, that steers objects and planes clear of any familiar context and reinforces the degree of abstraction. Much of the sense of refinement and contemplation rests with choice of palette. 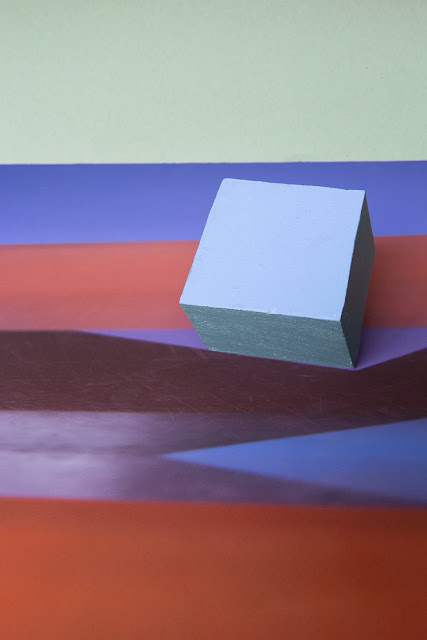 As yet little criticism addresses these issues, in the work of McCann or others. Part of the reason for this is because of the diffuse nature of digital options, the seamless integration of photography with video, graphics (including text) sound or music, 3-D modelling and from there to automated fabrication, conceivably to installation and sculpture. Artists of McCann’s generation and inclination understandably explore the full breadth of these options and often give equal weight to each so that it is difficult to know how far an issue like pictorial abstraction will be explored before issues of, say, sound or motion prompt it in entirely new directions. This is part of the great challenge for art in the digital age. And while her efforts so far are modest, their implications decidedly are not. Developments within the digital sphere in turn suggest options for painting, sculpture and printing and it is this awkward and unpredictable exchange between traditional issues and contemporary means that properly drive art history, rather than some reductive insulation of categories. We do well to scrutinise these as yet marginal developments in gauging the art of our times.

ALL IMAGES COURTESY OF THE ARTIST AND TRISTIAN KOENIG GALLERY.